Honda Indonesia have taken the wraps off the brand new 2022 WR-V launching it in the Indonesian market. The WR-V currently sold in India still sells enough for the company to continue selling it but has been showing its age for quite a while now with the lack of new tech features and dated interior designs. The new WRV practically offers the same interior as the brand new Amaze offered in India and could very well put it back on the mao with the modern contenders of Nexon, Venue and Brezza who have recently changed the game by offering features from a class above.

What all do we know?

Honda’s WR-V has been selling as a jacked up Jazz for a long time now and does not even come close to interfere with the features and sale-ability of other sub-4 meter SUVs being sold in the country. The jacked up Jazz is based on the 3rd gen Jazz and not the updated and smarter looking Jazz the rest of the world has been seeing. It appears as if Honda does not really look at India with the same approach as it does the rest of the world. This was even more apparent when Honda stopped selling its new gen Civic in the country because of low sales figures. Interestingly, that Civic didn’t sell well in other countries either so it most definitely is something with the car and not the market. Honda 4-wheelers have been quite late in updating or entering market segment and sell their old generation cars in the segment as the segment upgrades itself. If Honda wishes to really sell the new WR-V in India, it needs to act now.

The updated WR-V has the newer rectangular headlights and DRLs along with the updated grille. There are newer alloy wheels and the side profile has also tidied up by quite a bit. The best angle is the rear 3 quarters with the smarter and sleeker LED tail-lights which is a huge walk away from the current WR-V featuring huge tail-lights. The new Jazz features modern interior tech as well but it looks practically the same as the current gen Amaze. Although, the 7-inch touchscreen which is the new thing in its interiors is already about to take an exit from the Indian market as the newer Brezza and Venue offer a bigger and crispier infotainment unit.

There’s also Collision Mitigation Brake System on offer which is a system that helps when there is a possibility of a vehicle colliding with another vehicle or pedestrians detected in front. Features like Auto-High Beam, Lane Keeping Assist System, Lead Car Departure Notification System (LCDN), Road Departure Mitigation (RDM) and an Adaptive Cruise Control (ACC). How many of these will make it to India is unknown but it is a possibility that everything makes it to India.

Not very competitive of course but, reduction in length and a changeover to the 1.2L engine which currently powers the Amaze could very well bring the price in competition to the Nexon, Brezza, Venue, Sonet and the likes. While nothing is available as to the launch of the new one in India, we expect it to launch somewhere during Q2 of 2023. Stay tuned for more! 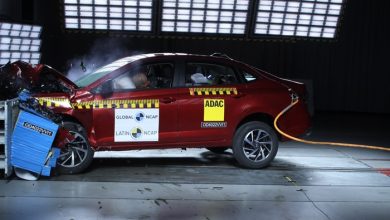