BMW has been on a roll lately. They launched the sexy new 5-series facelift along with its bigger GT sibling i.e. the 6-GT. Moreover, they had also showcased the i4 concept a few weeks back and are speculated to have an electric M5 in the future with Bugatti levels of power. But, by far the biggest headline of BMW has been the 4-series. And now BMW has officially debuted the new 2021 4-series.

Ever since the 4-series was speculated and/or leaked, it was a center point of discussion because of BMW’s obsession with massive kidney grilles. Everyone saw the leaked photos and they were all devastated to see the biggest ever size in the 4-series. Although, I (probably all by myself) am in favor of this new design. I can already hear loud booing but I’d like you all to hear me out first. So, let us talk about this car. 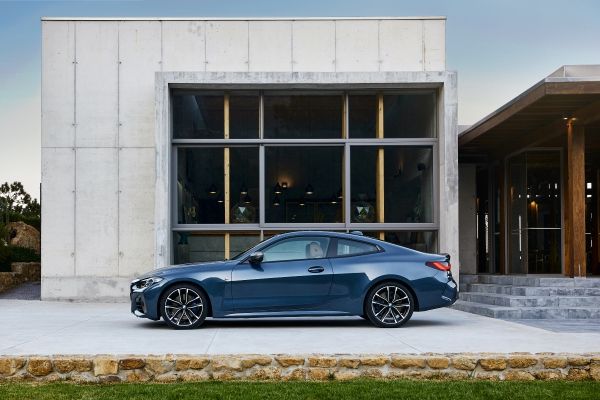 When compared to the previous generation 4 Series Coupe, the new 4 Series is 5.2 inches longer, 1.0 inch wider, 0.4 inches taller and has a 1.6 inch longer wheelbase featuring a 1.4 inch wider front and 1.2 inch wider rear tracks. The aerodynamic efficiency of the new 4-Series Coupe also sees a noticeable improvement from a previous coefficient of 0.29 to a Cx of 0.25 for the new 430i Coupe.

And lets just talk straight about the elephant (pun intended) in the room. That kidney grille. Yes, that is a massive looking grille and personal opinions about the looks of a car vary because they are subjective. I actually like the grille and overall front end. Many people (read: everyone) including my writer colleagues here on my website absolutely HATE it. I have had a hard time trying to explain to them how it fits and they also came to a conclusion that it MIGHT just grow on them. Just like a massive grille suits an RR Phantom, this one also somehow fits the design of this angry looking coupe especially with how BMW have literally given it a kidney’s shape. (The car looks like it will sound good doesn’t it?) 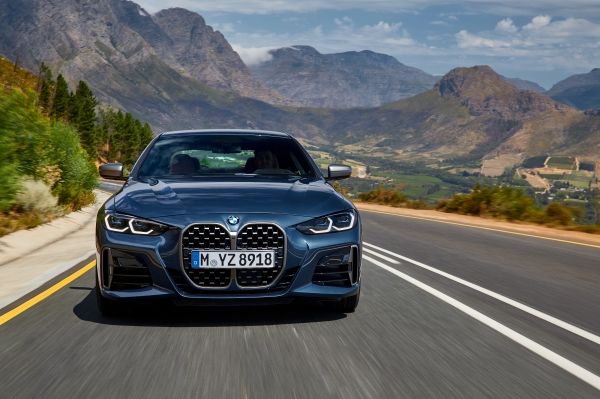 Moreover, there is a purpose for the grille as well. BMW says that it provides adequate cooling for the more powerful engines. The grille is angled forward and extends to the bottom of the front bumper cover. The kidney grille is framed by surfaces with a three-dimensional mesh structure. The arrow-shaped lines of the hood come together at the grille while the Air Curtain intakes at the edges of the front bumper highlight the 4 Series’ width. To me, the detailing on the front end, especially on the grille, does impact the overall appeal of the car. It looks fresher now. Like a newer design and not just a 3-series coupe. 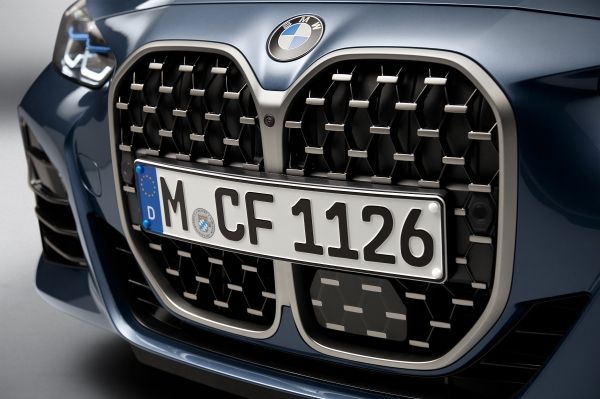 It does not look like a 3-series anymore from the front and does give the car an angry racecar like stance. Apart from the many complaints I had with the 2014 4-series, one was that it looked too tame and too much of a normal sedan converted coupe. There wasn’t much to distinguish between the 3 and the 4 so, the purpose of the 4 (especially at that price point) was undefined. It was also reflected in their sales and I was surprised when BMW had announced they will refresh the 4-series. Now, I am so glad they did.

BMW also added that standard LED headlights with Cornering lights are slimmer in design and taper towards the kidney grille. Two U-shaped daytime running light elements in each headlight are the most pronounced feature. The turn signals consist of three glass blade units in the corners of each front light assembly. 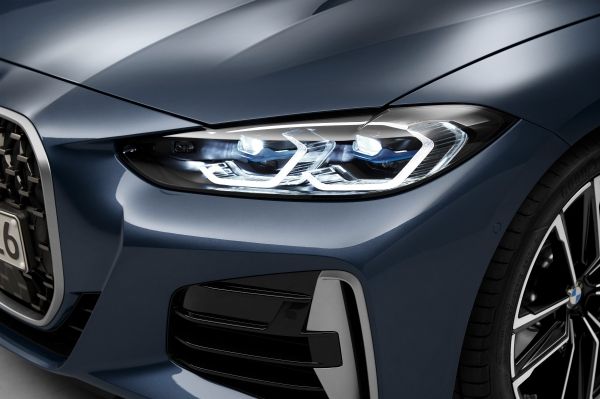 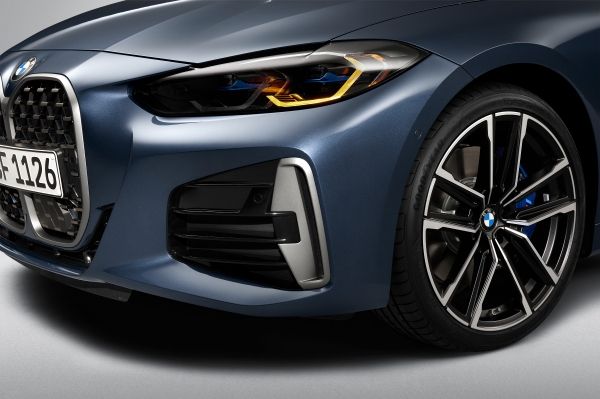 The side profile of the car is where it shines though. It is a very sleek and minimalist design. There is a long bonnet and the bonnet’s line extends all the way to the rear. The tapering at the rear give it the coupe design while flaunting the width of the car. Notice how the body tapers wider over the rear arches. There is a lot of oomph in this car’s design. In fact, it looks to me more of a junior 8-series coupe than a coupe version of the 3-series. Overall, the design is mature. 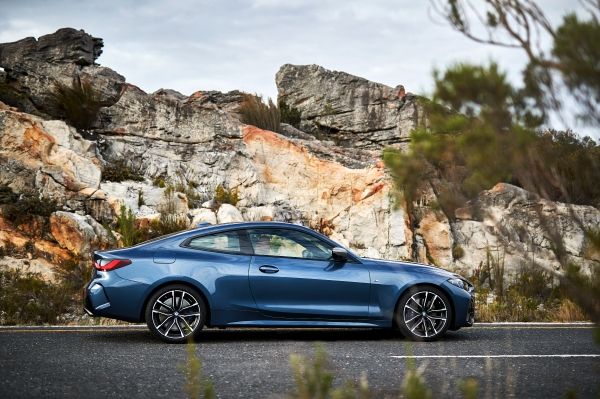 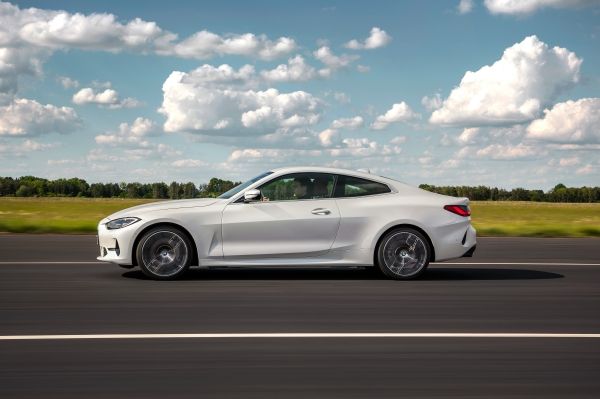 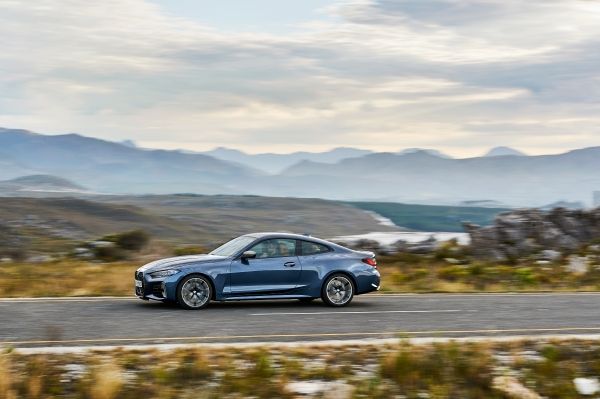 Coming over to the rear end of the car, this is probably the best angle of the car. The 30 degree rear quarter panel angle. The width of the new 4 Series Coupe is reinforced at the rear too by those slim, darkened L-shaped LED tail lights which extend into the quarter panels. There are vertical apertures at the corners of the rear bumper mimicking the front Air Breather openings. AND the trapezoidal exhaust finishers integrated into the lower rear bumper cover look smashing. 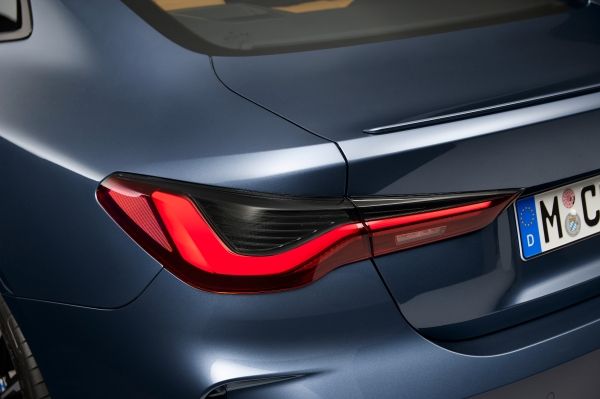 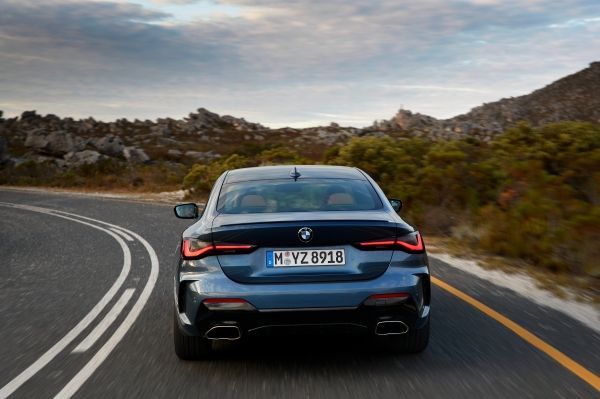 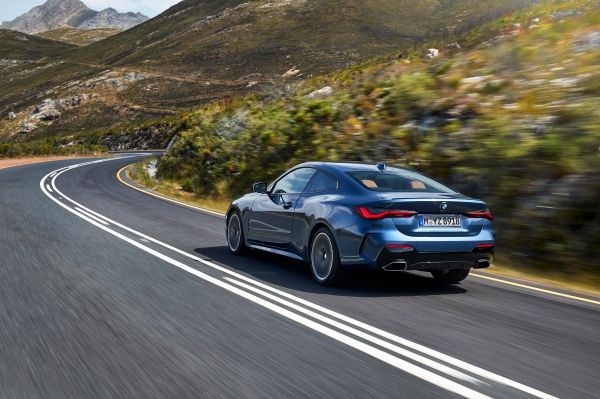 The interiors are typical BMW. If you have been in any of the new BMW’s, you’ll be very much at home here. In fact, I could develop a new game challenge of whether anyone can guess which BMW interiors they are in if they are unknown of the car from the outside. Hmm! 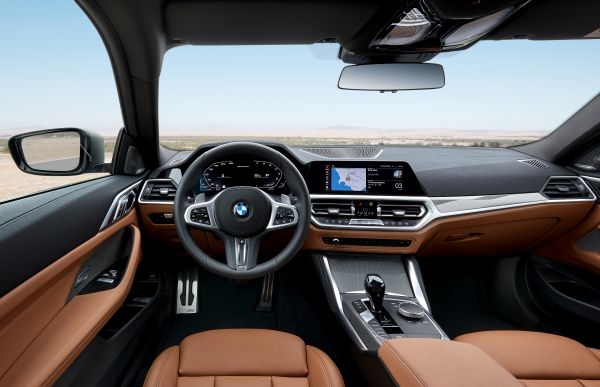 Now, while the interiors might appear to be ‘same old’ and even ‘boring’, remember that they are from BMW. The fit, finish and quality is going to be impeccable. I’ll say what I have said before, these will probably be the best quality interiors with the best fit and finish in any car of its segment or even a segment or two above. So, things will definitely change once we get to experience a drive in it. For now though, the interiors seem fine with the general layout of BMW.

BMW says the center display screen flows into the instrument cluster area to form a congruous unit. The light functions are operated from a panel of buttons to the left of the steering wheel. The start/stop button is now located in the center console along with the newly designed gear selector lever, the iDrive Controller and the buttons for the Driving Experience Control switch. Rear seating with integral head restraints is designed for two passengers and features a split fold down function. Moreover, it will have all the latest software and support along with every possible tech feature you can imagine.

The heart of the matter 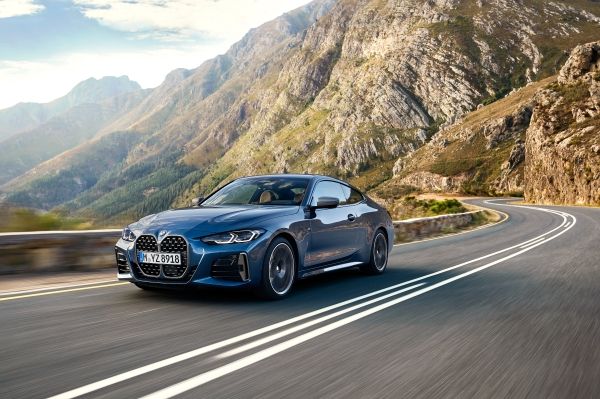 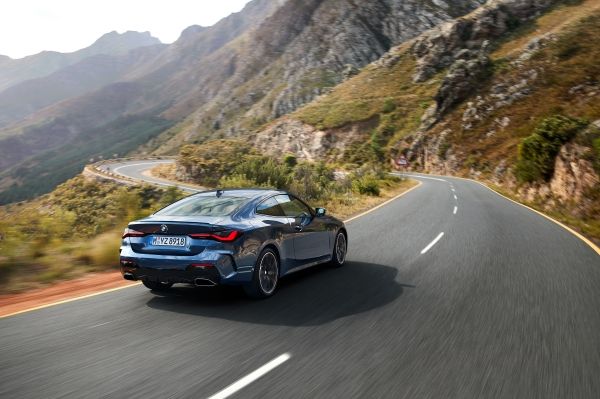 A new 48-volt mild-hybrid system is standard on the 6-cylinder M440i xDrive Coupe. The 48-volt starter/generator unit is supported by a separate 48-volt battery which allows for energy recuperation, storage and use during drives for an effortless flow of power beneath the right foot. Energy can be recuperated from deceleration, braking and from excess electricity generated while driving in Sport mode.

The excess energy is converted to electricity by the 48-volt starter/generator and stored in the 48-volt battery. This energy can be used by the starter/generator unit to boost performance during hard acceleration or by providing power for electronic systems, thus reducing the load on the engine and improving overall efficiency.

BMW also says that the 48-volt starter generator improves efficiency by allowing the stopped engine to be restarted quickly with little vibration. The Auto Start/Stop function can now turn off the engine while the driver is braking for a stop as soon as the speed drops below 9 mph. 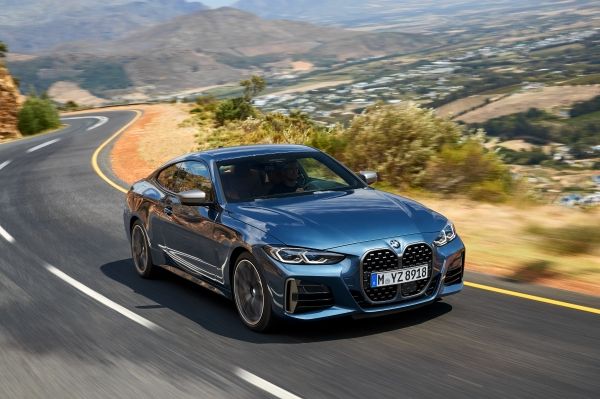 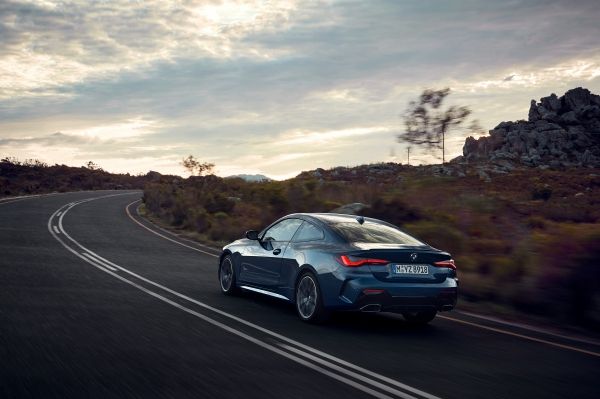 Optionals on the new 4 Series include the Driving Assistance Professional Package which adds Active Cruise Control with Stop & Go, Extended Traffic Jam Assist for limited access highways – a Level 2 autonomous assist system helping to reduce fatigue in stop-and-go freeway traffic by allowing for extended hands free vehicle operation, lane keeping assistant with side collision avoidance, evasion aid, front cross-traffic alert and emergency stop assistant – which can help guide your BMW to the shoulder and bring it to a halt in a medical emergency situation. 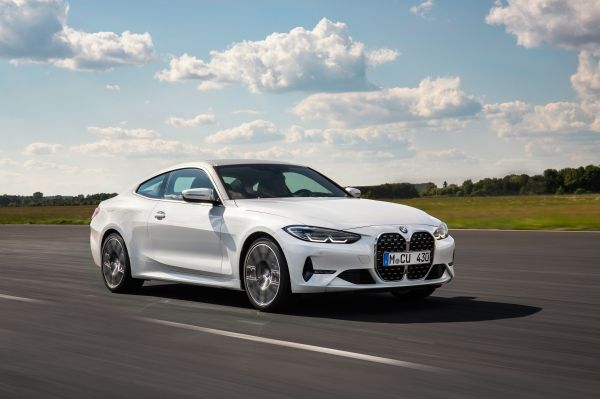 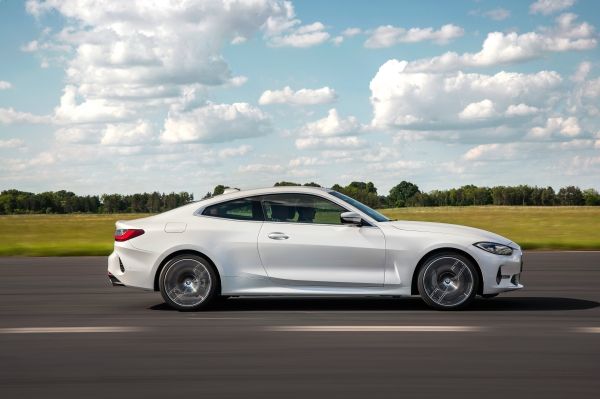 There is also an optional Parking Assistance Package includes a panorama view and 3D surround camera views to assist with parking. The included back-up assistant records the last 50 yards driven at speeds below 20 mph and can automatically reverse your 4 Series along the exact path take to help navigate narrow or winding driveways.

All the above features are the same as found in many other latest BMW vehicles including the new gen 5-series. Also similar to the 5 is the drive recorder, a new optional feature on a BMW 4 Series equipped with the Parking Assistance Package. It uses the cameras of the various driver assistance systems to record video footage from the front and/or rear view points of the vehicle before storing the recordings. The saved video files can be either watched later on the center control display when the car is stationary or exported via the USB port. So, if your parents are buying this car for you, make sure you do not check this optional feature.

No information for the pricing has been revealed yet but, expect it to be more expensive than the 3-series (around $4k above the 3). Information regarding availability in India remains scant but, I do expect this time BMW will bring in only the M4 to India just like the previous one. It is because BMW decided to have quite a few variants of the 8-series GranCoupe sedan in India but, only the M8 when it came to the 8-series coupe variants. It is very strange since the M8 is the most expensive of them all and people might actually prefer an M5 which is much more practical. Will the launch of 4-series happen if Mercedes brings the C-coupe and the E-Coupe or will it be vice versa? Only time will tell.

BMW 4-series teaser! That grille could replace dinosaur teeth in the next Jurassic Park