Hyundai India has finally unveiled the long-awaited Alcazar today during an online release event. The new mid-size SUV from the South Korean manufacturer is based on Hyundai’s Sportiness design concept which is also shared with its younger sibling, Creta. They may seem exactly similar at the first sight, but, there are some substantial differences between the two SUVs (Thank God!). So let’s check them one by one. 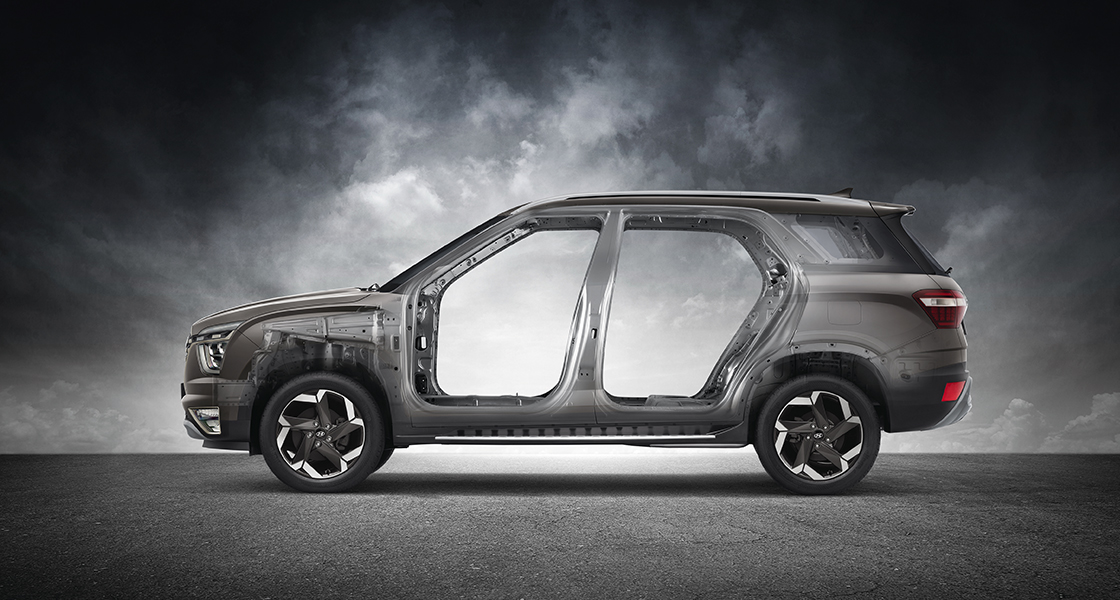 ALCAZAR means fortress in Spanish and Hyundai says that this vehicle has been conceptualized to resonate with the magnificence of palaces and castles. Though, a first look at the car clearly does not align with what the intent was.

Hyundai mentions that the Alcazar comes with 75.6 % Advanced and High-Strength Steel (AHSS & HSS). On the front, the nose features a bigger front grille than its younger sibling. The redesigned radiator grille is studded with chrome beads and flanked by those weird headlamps which are slightly different along with the front bumper. 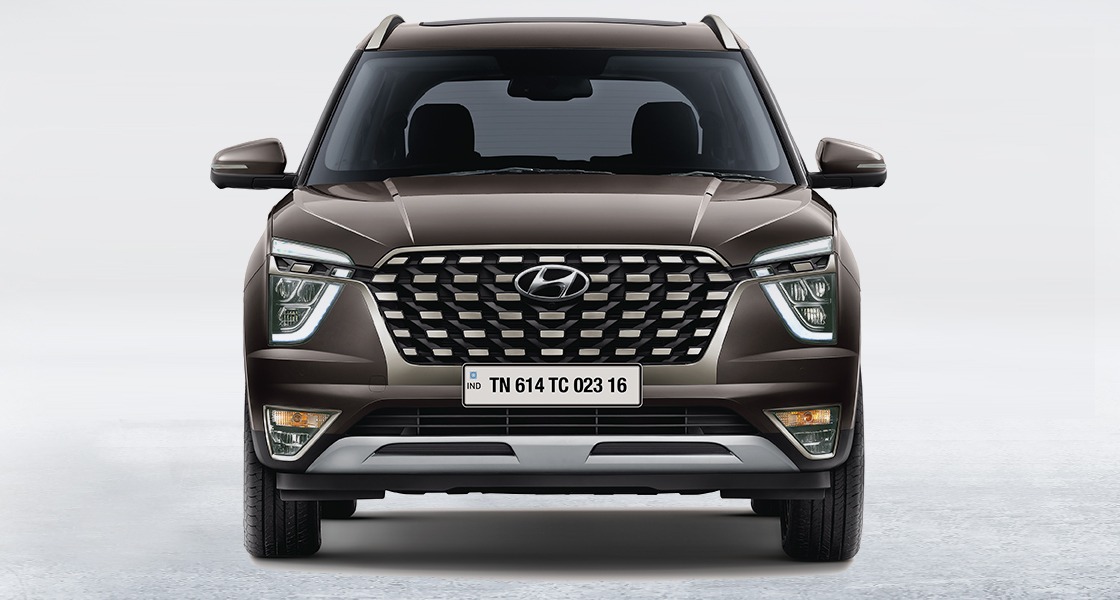 The rear of the SUV also looks smarter, thanks to the new wraparound tail lamps along with faux dual exhaust tips. And even though the front and rear are bearable, it is the sides that is a serious design faux. Did the designers took a nap or what when they came up with this side look?  At the side, one can notice the bigger 18-inch diamond-cut alloy wheels on the Alcazar as against 17-inchers on the Creta. But they still just look too small for the wagon-ish SUV that Alcazar is. They however, will give the Alcazar a better ride quality. 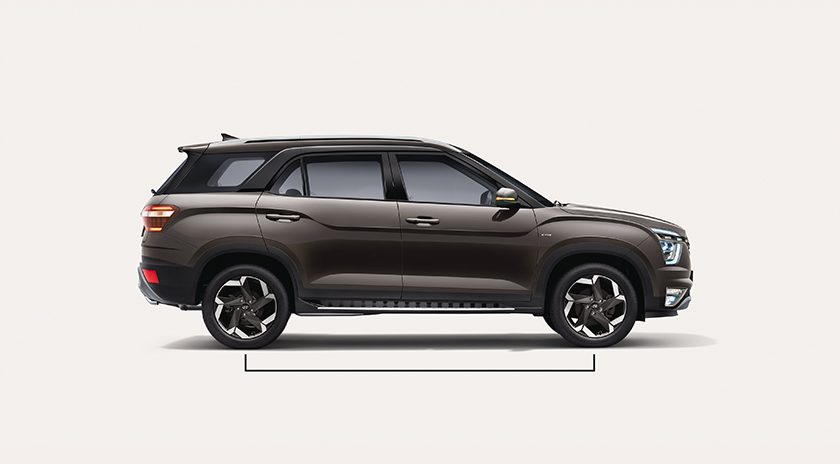 The cabin area has also been extended in comparision to its 5 seater sibling to accommodate 7 people. Numbers? Well, Hyundai Alcazar has a wheelbase of 2,760mm which is 150mm more than that of Creta. In fact, it has the longest wheelbase in its segment. To be precise, Alcazar has 10mm more wheelbase length than that of Hector Plus and 19mm more than the Safari. Not only does the Hyundai Alcazar comes with a segment-best wheelbase, but it also has the highest boot space in its class with 180 litres behind the third row. Having said that, let’s check how all these transcends to the space inside the cabin of the Alcazar.

The Hyundai Alcazar will go on sale in both, six and seven-seater versions. On the 6-seater version, you’ll get captain seats in the middle row along with a centre floor console between the seats in the second row. This console acts as an armrest, has storage space underneath it, has two bottle holders and even comes with a wireless charging port. This means that the Alcazar has wireless charging pads at the front and back as well, a first in the segment. 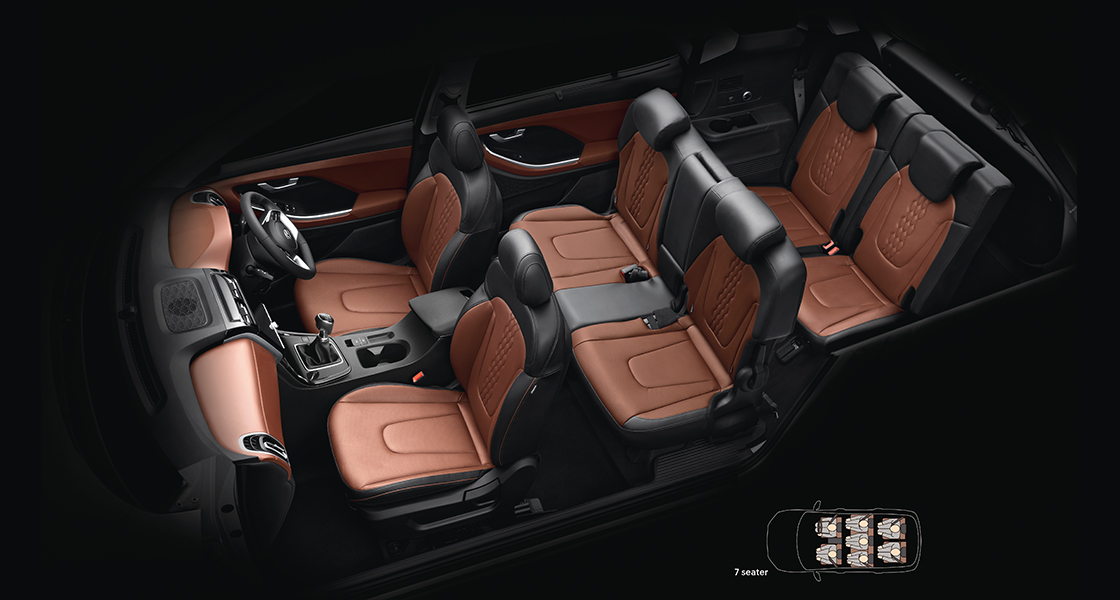 On the other hand, the 7-seater version gets a bench seat in the second row. So, while it may look like there is a little lesser luxury here, this is compensated with the accommodation of an extra occupant. For the ease of passengers, the South Korean automaker has given a one-touch tumble function for the second-row seat which allows the seat to be folded and moved forward to provide space for people to climb into the third row. 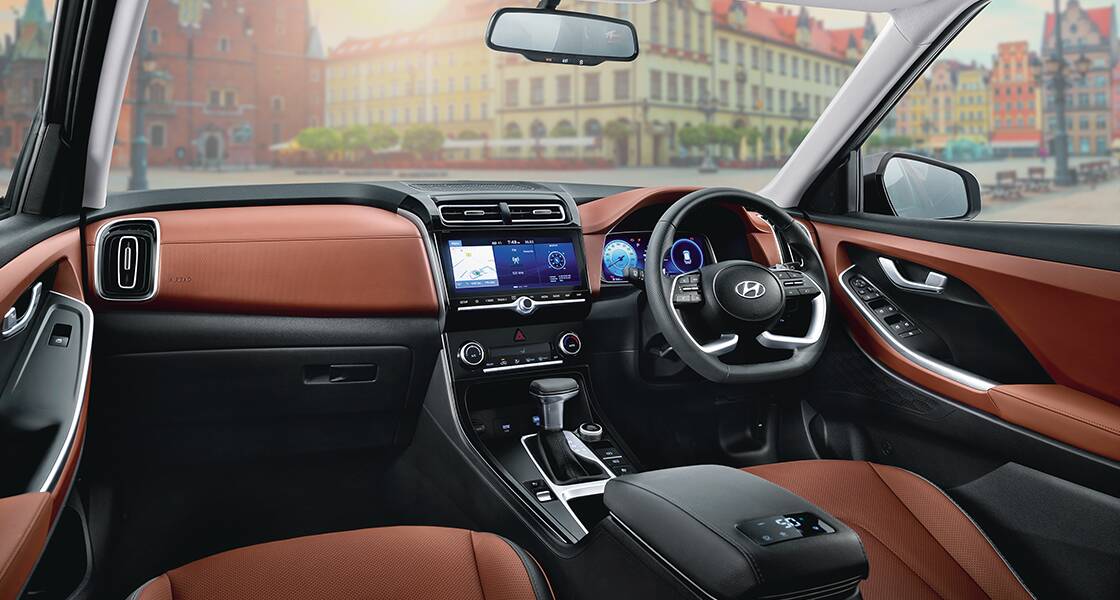 The Alcazar will get black and brown dual-tone treatment in the cabin. The cabin gets a large panoramic sunroof similar to its younger sibling, Creta. It can even be opened and closed via voice commands. Hyundai has packed in the Alcazar with a ton load of interesting features, some of which are segment firsts. The dash gets a big 10.25-inch multi-display digital cluster with Advanced Hyundai Blue Link (Connected-Car technology). The cabin is complemented with Bose premium sound system including 8 speakers along with Auto healthy air purifier with AQI display and also, a first in segment, front row seatback table with retractable cup-holder and IT device holder. 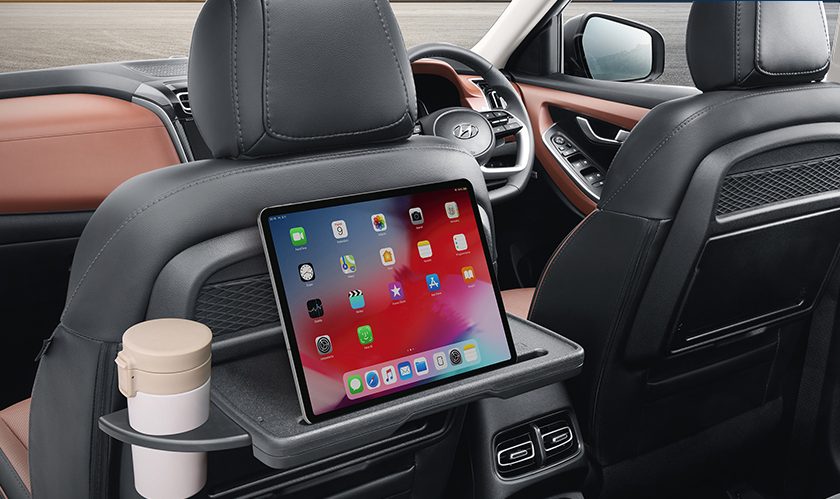 Other premium bits include Electric Parking Brake with Auto Hold, Surround View Monitor with a 360° Camera and Front Row Ventilated Seats. In addition, the driver’s seat is 8-way power-adjustable. Other feel-good factors include the 64 colour ambient lighting in the cabin and Puddle lamps with Hyundai logo projection. Hyundai Alcazar comes with remote starting capabilities which allows the smart key to remotely start the car and even switch on the air conditioning system. 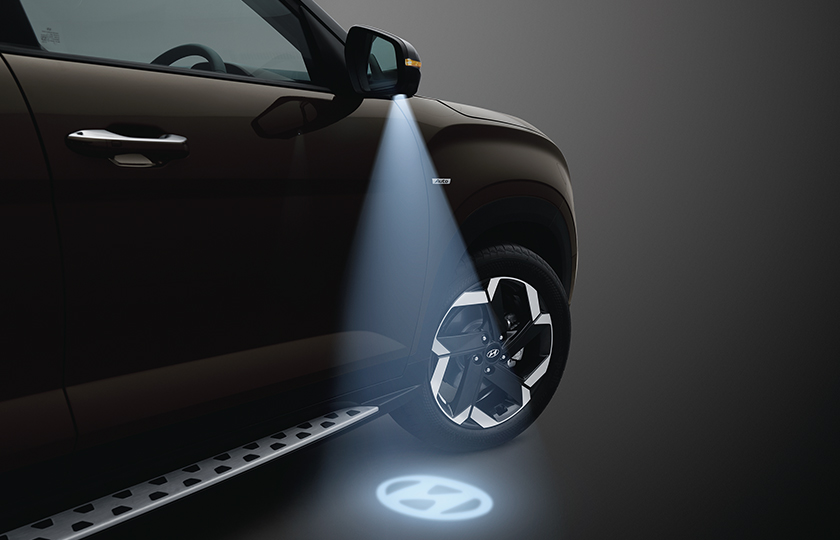 Hyundai Alcazar will be offered with both, petrol and diesel engine options. First, the 2.0-litre petrol engine is good for producing 159hp of power while the peak torque output is rated at 192Nm. This power unit is borrowed from the Tucson but the company has tweaked the engine to produce roughly 10hp more power but 1Nm less torque. 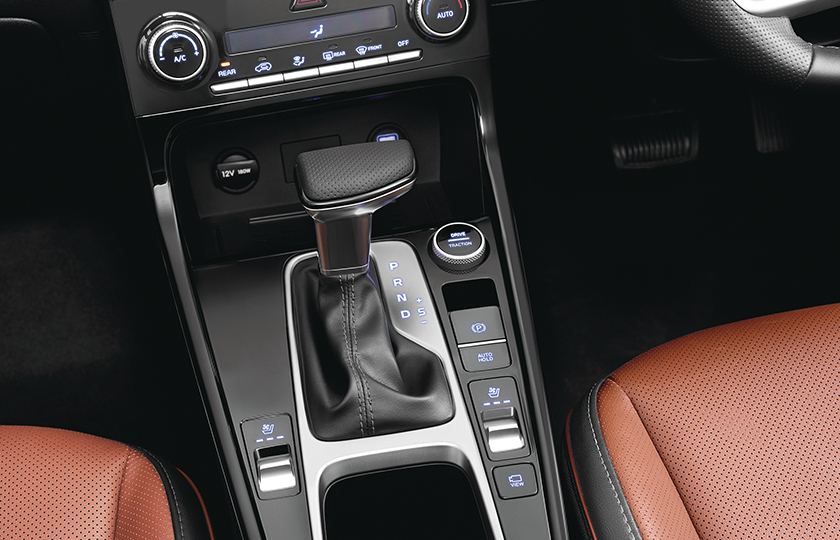 On the other hand, the 1.5-litre diesel mill is the same unit that does duty on the Creta and this one develops 115hp of power and 250Nm of torque. Speaking of gearbox options, both these engines on the Alcazar get choices of a 6-speed manual and a 6-speed automatic. 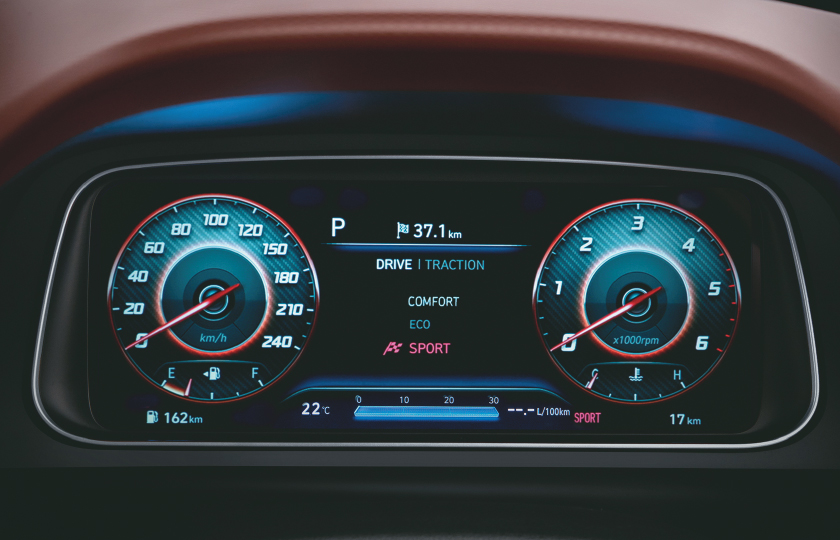 The SUV comes with three driving modes – Eco, Comfort and Sport. Eco-mode can be used to save fuel while the sport mode unleashes the full potential of the vehicle. Comfort is a middle ground that can be used in day-to-day driving Apart from this, the vehicle also has three traction control modes – Snow, Sand and Mud. 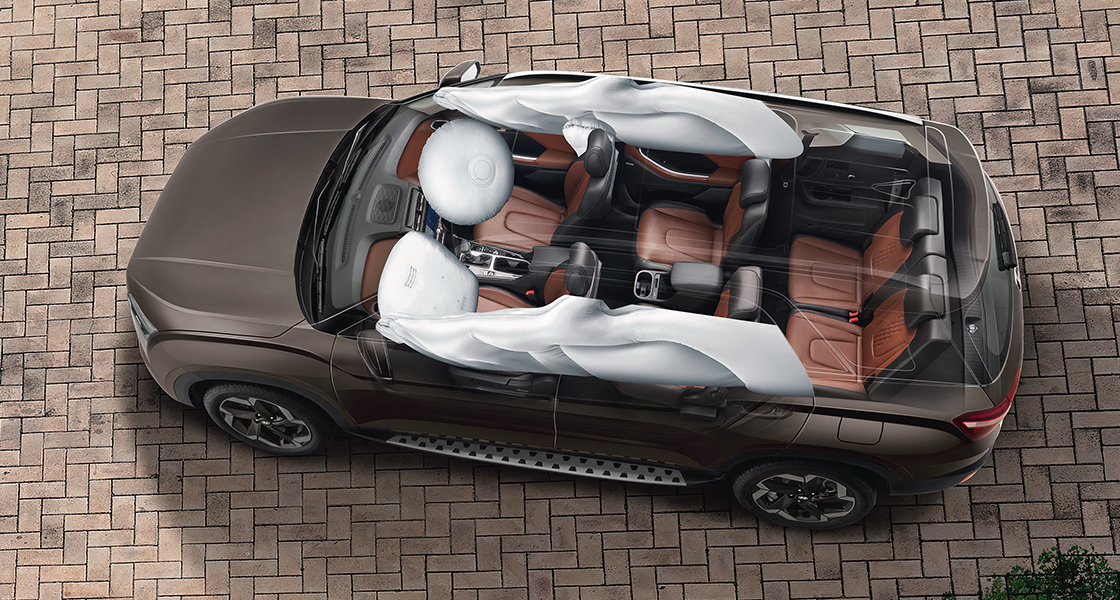 Hyundai has launched the Alcazar three-row premium SUV with prices starting at Rs 16.30 lakh (ex-showroom, India, introductory). The vehicle has been launched in a total of three trim levels namely Prestige, Platinum and Signature. The company says that the Signature trim being the range-topping, will be sold exclusively through the brand’s Signature club outlets. The new SUV will be offered with 6 colour options (Polar White, Typhoon Silver, Phantom Black, Titan Grey, Starry Night, Taiga Brown and 2 dual tone colour options (Polar White with Phantom Black and Titan Grey with Phantom Black). 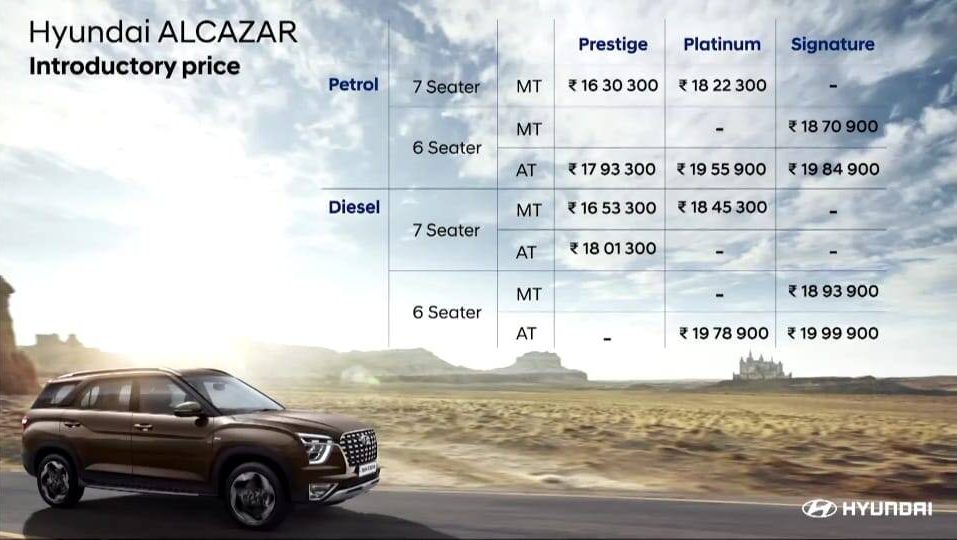 The premium three-row 6/7 seater SUV from Hyundai will go on to challenge the likes of the new 2021 Tata Safari, MG Hector Plus and also, the Mahindra XUV500 in the segment. As these are some preferred names in the segment, the expectations from the Alcazar would obviously be high.