Honda has revealed the 2022 Civic Hatchback, the latest addition to the all-new 11th-generation Civic lineup. Based on the Civic sedan launched a few months back, the new five-door car carries a similar Euro-inspired exterior styling with an even sportier package. It will be offered in four trims – LX, EX-L, Sport and Sport Touring. The hot-hatch will come with an option of either a naturally aspirated 2.0-litre or a 1.5-litre turbo engine, along with the choice of a 6-speed manual transmission. The Japanese automaker will begin the production of the new 2022 Civic Hatch later this year at Honda’s Greensburg, Indiana auto plant in North America.

The Civic moniker has its own cult followers around the world, and the stying has a major role in building that fan following. The new 2022 is also quite a looker. The hatch carries many design cues from its recently launched sedan sibling. The front-end styling offers up a distinct look to the 11th-generation sedan, thanks to the familiar mesh grille. However, it has its own few sporty trim pieces to differentiate it from the sedan. The roofline slopes quite obviously towards the rear to give it its coupe-ish profile. On the back, a unique taillight design, and center high-mounted stop lamp (CHMSL) spans nearly the entire width of its hatch, further emphasizing the Hatchback’s wider rear track.

Even though it is five inches shorter than its sedan twin, it has more luggage space on offer. The noticeably wider area would allow for larger bags to be packed in without much trouble. The rear seats also fold 60/40 to further expand the cargo area. The hatchback comes with new colours including the eye-catching Boost Blue and Smokey Mauve Pearl. The LX has 16-inch wheels, the EX-L has 17-inchers, and the Sport and Sport Touring both have 18-inch wheels with wider 235-series tires. Honda also claims that with a 19% increase in torsional rigidity, this car is also safer and more refined. 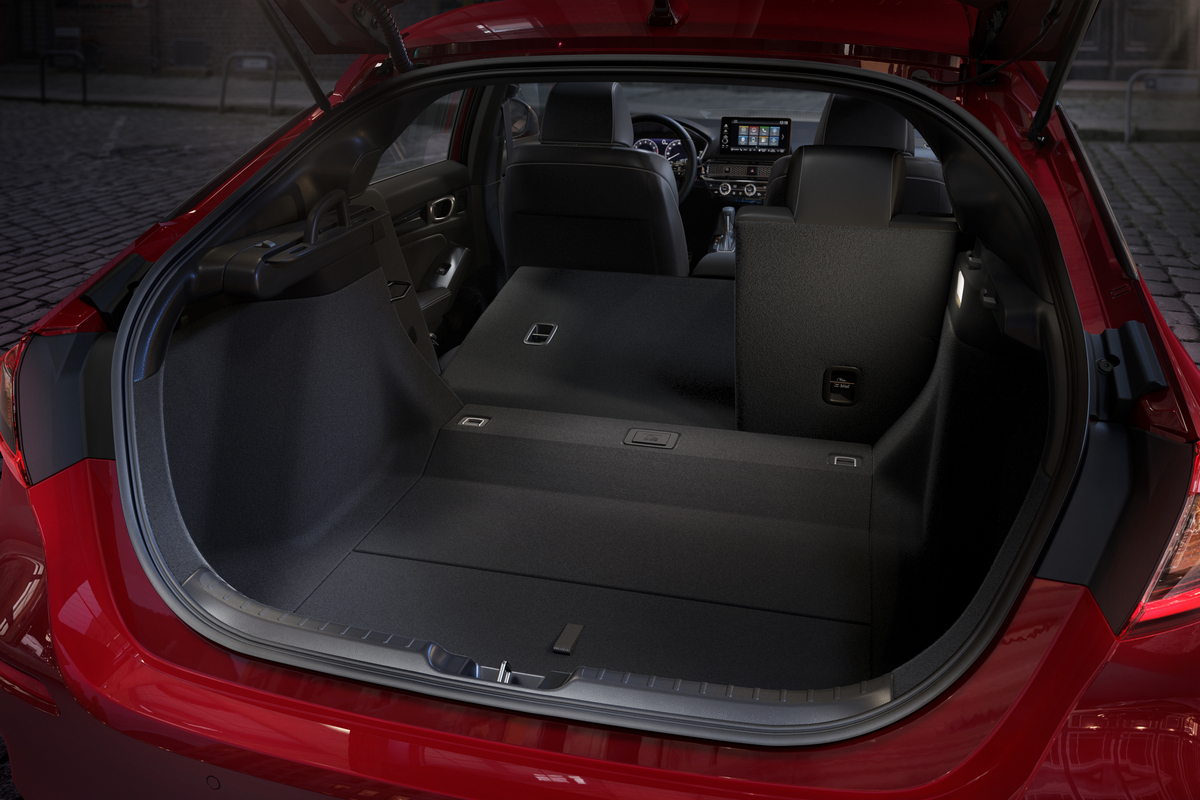 While the hatch previously came only with the turbo 1.5-liter inline-four, the 2022 Civic hatchback’s base LX and Sport trim levels now come with the same 158-hp naturally aspirated 2.0-liter inline-four as the sedan. The turbo 1.5-litre remains on the EX-L and Sport Touring trims, and it churns out 180 horsepower. A CVT automatic is standard, while a six-speed manual will be available with either engine choice. The stick-shift is offered with the 2.0L engine on the Sport and with the 1.5L engine on the loaded Sport Touring. 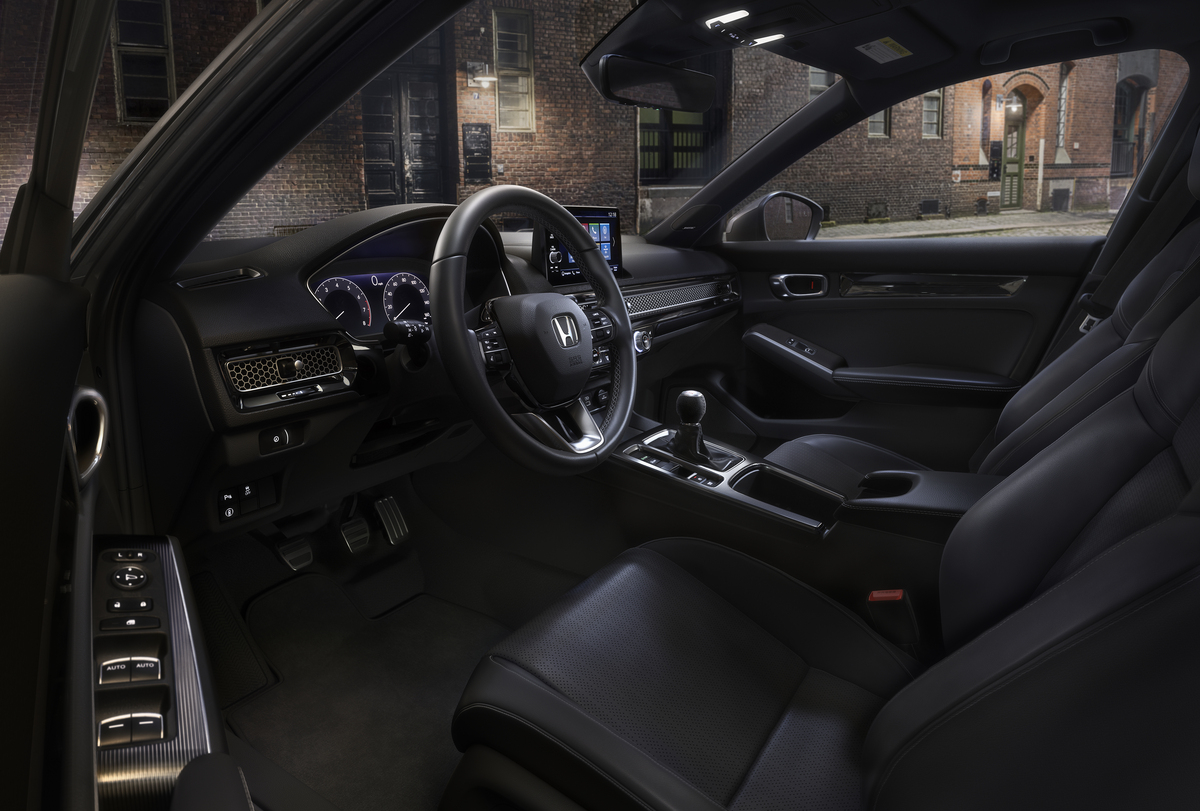 Inside the cabin, the hatchback is identical to its new sedan sibling. There’s a 7.0-inch touchscreen as standard equipment, while a larger 9.0-inch screen is available on the Sport Touring. The Sport Touring also features a fully 10.2-inch digital gauge cluster, wireless phone charging and a Bose audio system. Many driver-assistance features are included across the board, while blind-spot monitoring is offered on the EX-L and Sport Touring.

Honda also says that the rear seat provides more legroom and headroom than before. All the Civic Hatchback trims come with Honda’s new Body Stabilizing Seat that enhances comfort on long drives. In addition, the EX-L and Sport Touring models offer perforated leather seats with added shoulder support, while the LX and Sport feature cloth and combination seat trim, respectively.

For safety, as with the Sedan, the Civic Hatchback includes multiple new active and passive safety systems including the Honda Sensing suite of active safety and driver-assistive technologies that uses a new single-camera system providing a longer, wider field of view than the previous radar-and-camera based system. Other features include multiple airbags, traffic jam assist, lane-keeping assist, adaptive cruise control and more. Sport Touring trim also features a new Low-Speed Braking Control, and front and rear false-start prevention with the addition of eight sonar sensors.

Honda has yet to release pricing for the 2022 Civic hatchback, but expect it to be announced once the production begins. Taking of its production, it has moved from the U.K. to Honda’s plant in Indiana that builds the Civic sedan. It is expected to reach the US dealerships in early 2022.

During today’s online world premiere of the new Honda Civic Hatchback, the Japanese automaker also announced plans to begin sales of both the hybrid version of the all-new Civic, equipped with e:HEV, Honda’s original 2-motor hybrid system, and the all-new Civic Type R, in 2022.

The Europe exclusive all-new hybrid Civic will become Honda’s latest model to feature its advanced e:HEV (hybrid electric vehicle) powertrain. The unit is already powering the recently-launched Jazz and Jazz Crosstar, the 2020 CR-V as well as the all-new HR-V that will be on sale later this year. The automaker has an objective to have electrified powertrains in all its European mainstream models by 2022.

The all-new Civic e:HEV will be arriving in Europe from Autumn 2022.