Is there any stopping Max Verstappen this season? Well, as the last fortnight turned out to be at Red Bull Ring, the answer to that question is an unquestionable “NO”. It might not be over-exaggerating to say that the last two weeks in Austria is definitely a turning point of the 2021 F1 Championship season. The Austrian double-header went like clockwork for Max, who enjoyed two of his three consecutive serene victories of this season at Red Bull’s home track. 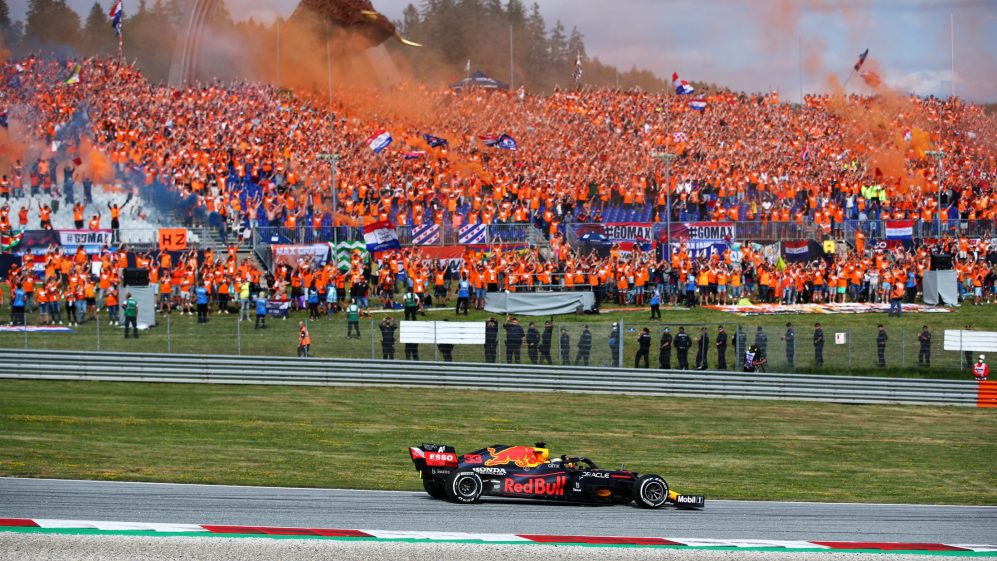 The Dutch powerhouse put on another flawless performance to extend his Drivers’ World Championship lead over current title-holder Lewis Hamilton by 32 points. His team Red Bull Racing also took a leap in the Constructors’ standings and now sits 44 points clear of their closest rivals, Mercedes. While Verstappen remained unchallenged at his pole position throughout the race, the drivers behind him had a really interesting fight for the rest of the podium places. The live crowd of 60,000 people had a great day at the 2021 Austrian Grand Prix, which saw quite an action-packed Sunday, courtesy of a Grand Slam, few crashes and some hefty penalties (Competing with EURO?). In case you missed the live-action, we got you covered with our usual post-match highlights of every team. So let’s begin! 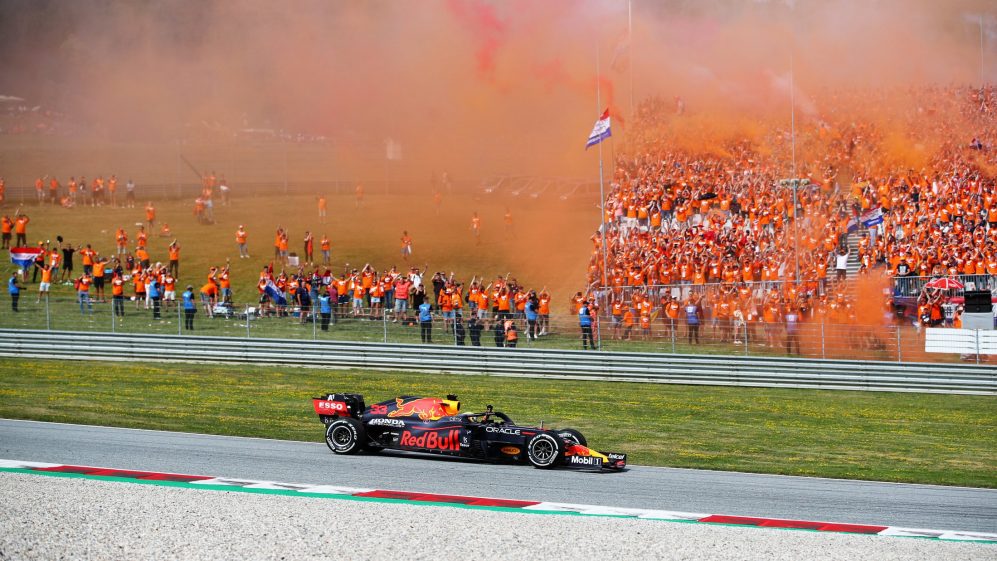 Same track, same teams, same victor! After showing a dominating performance during the Steiermark Grand Prix last week, Verstappen’s Austrian GP flying race presentation was nothing less than a repeat telecast, even better actually. The Dutchman claimed his first-ever ‘grand slam’, with pole, fastest lap and victory, having led every lap. Verstappen was clearly in a class of his own at the Red Bull Ring. Starting from pole, Verstappen never looked seriously threatened in the race, and even had time to make a late pit stop 10 laps from the chequered flag to ensure he kept the point for the fastest lap. With his third consecutive and overall fifth victory of the season, the young Dutch racer now sits comfortably on top of the drivers’ tally with 182 points, while his team RBR dominates the constructors’ table. 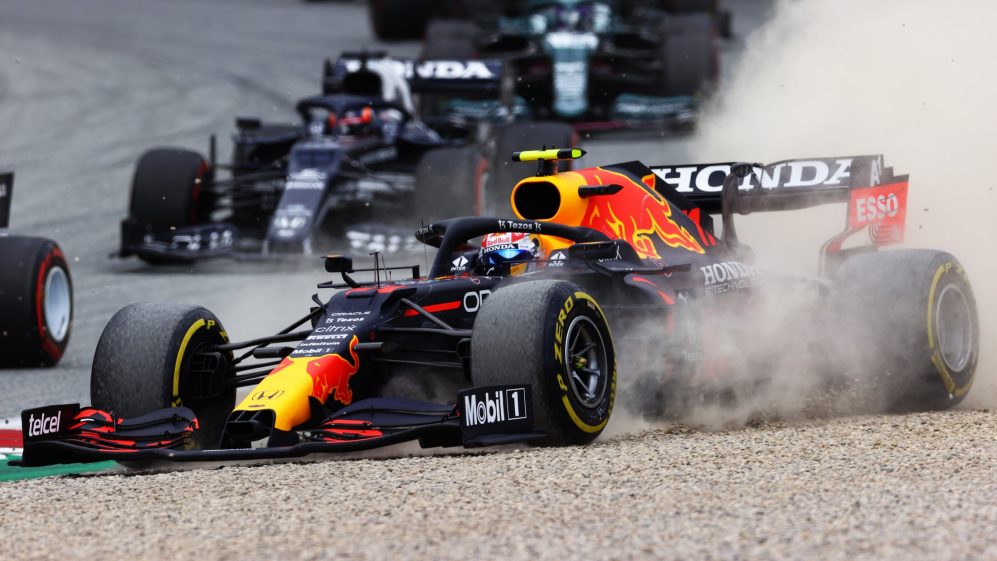 Red Bull might have had an even better day, had Sergio Perez not had such an eventful race from third on the grid. After an early safety car called on Lap 1 when Esteban Ocon was forced to park his Alpine with damage sustained bumping Antonio Giovinazzi’s Alfa Romeo at Turn 3, Perez attacked Norris for P3 at Turn 3. Going around the outside, Perez was forced off track, with Norris given a five-second penalty as a result. However, Perez would later ease Charles Leclerc’s Ferrari off the road at exactly the same place and pick up an identical penalty, before doing the same thing to Leclerc at Turn 6 and getting one further time penalty. That meant that while Checo crossed the line in P5, he was classified in P6. 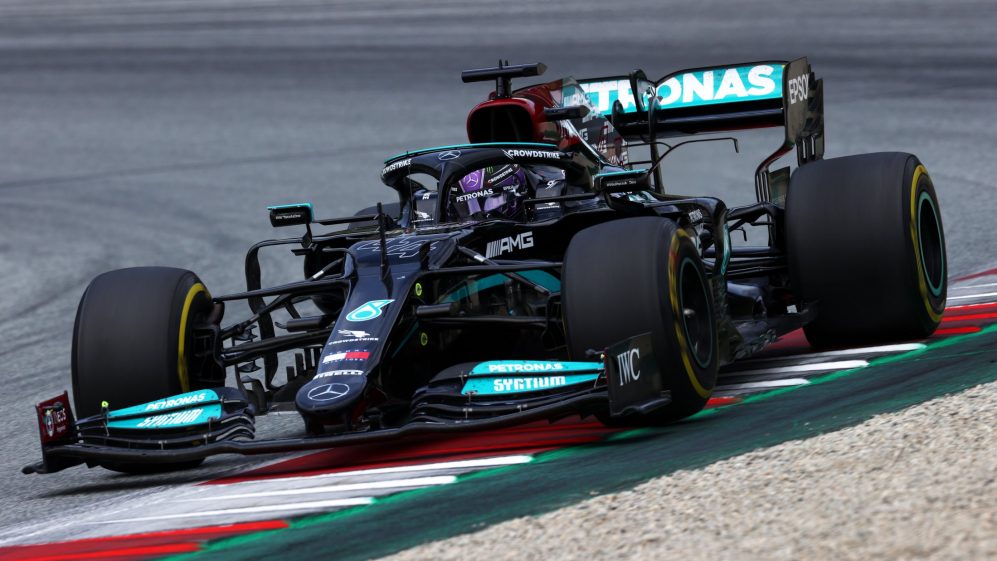 Valtteri Bottas was second for Mercedes, just finishing ahead of McLaren’s Lando Norris. Started from fifth, it was not a bad afternoon for the Finnish racer. However, the same can’t be said about his teammate. Trailing behind Norris was his countryman and championship rival, Lewis Hamilton who worked his way up to second place from P4 on the grid during the early stages of the race. But an unfortunate aerodynamic damage picked up by running over the kerb on the exit of Turn 10 midway through the race lead to a downforce loss and slowed his progress, allowing his teammate Valtteri Bottas and rival Lando Norris to get past his F1 W12. 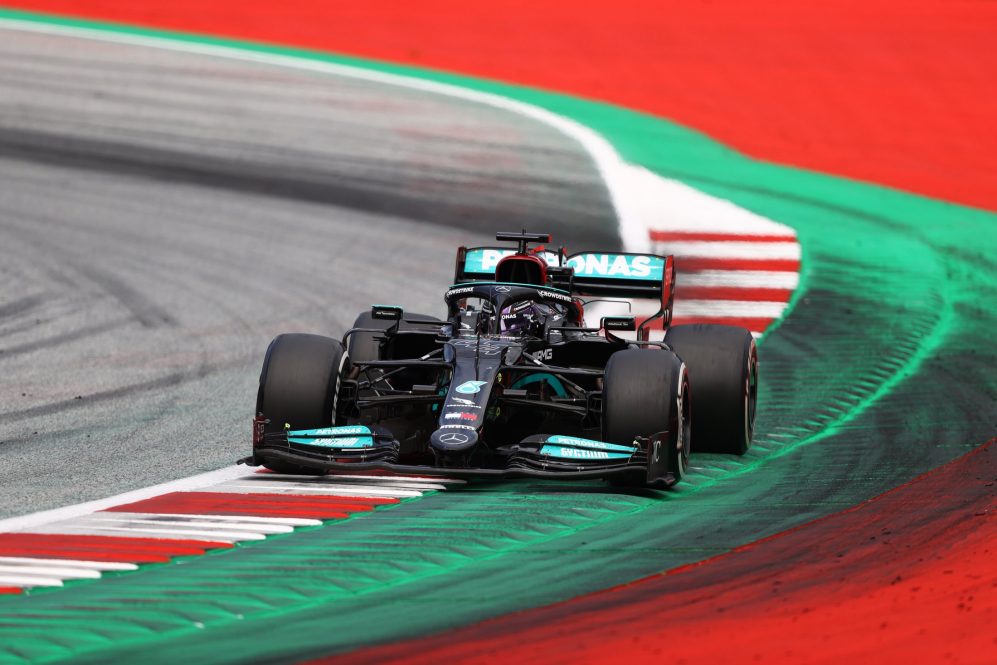 Mercedes had a tough fortnight in Austria, there’s no denying that. The Silver Arrow drivers failed to keep up with Max Verstappen at Red Bull’s home track, and Hamilton for sure will be looking to make a comeback at his own homeland during the upcoming British GP scheduled on 18th July. 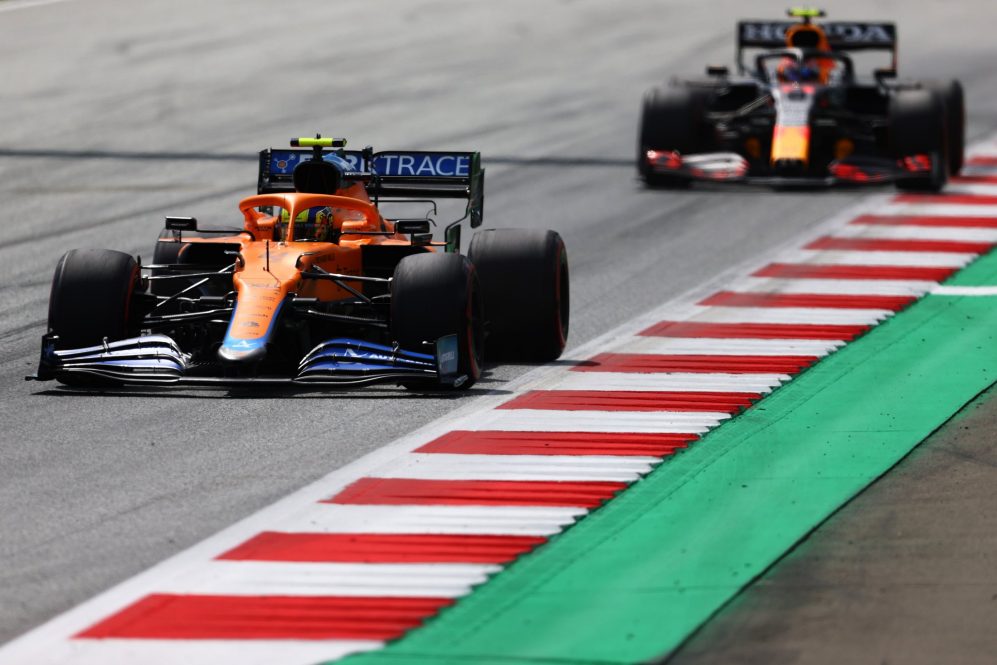 Keeping heavy pressure on Bottas till the very end of the race was Lando Norris, who was awarded Driver Of The Day title, for his superb driving. Grabbing a third podium finish of the season, the McLaren driver superbly recovered from a harsh five-second penalty for his tussle with RBR’s Pérez early in the race. Meanwhile his Australian teammate, Daniel Ricciardo had also given himself a great chance of a haul of points by jumping up to P7 from his starting P13 spot. Ricciardo once again made up places at the start and seemed to find some form when fighting wheel to wheel, as he jumped up to ninth after the race’s start by passing George Russell and Esteban Ocon on the opening lap, and ran as high as fifth in the pit stops. However, he lost out to Perez and Sainz late on but did well to defend from Leclerc in a much more spirited display. Overall a nice day at McLaren camp with Norris on the podium and Ricciardo grabbing some points at the seventh, which boost the British automaker’s points haul in their constructors’ fight with Ferrari. 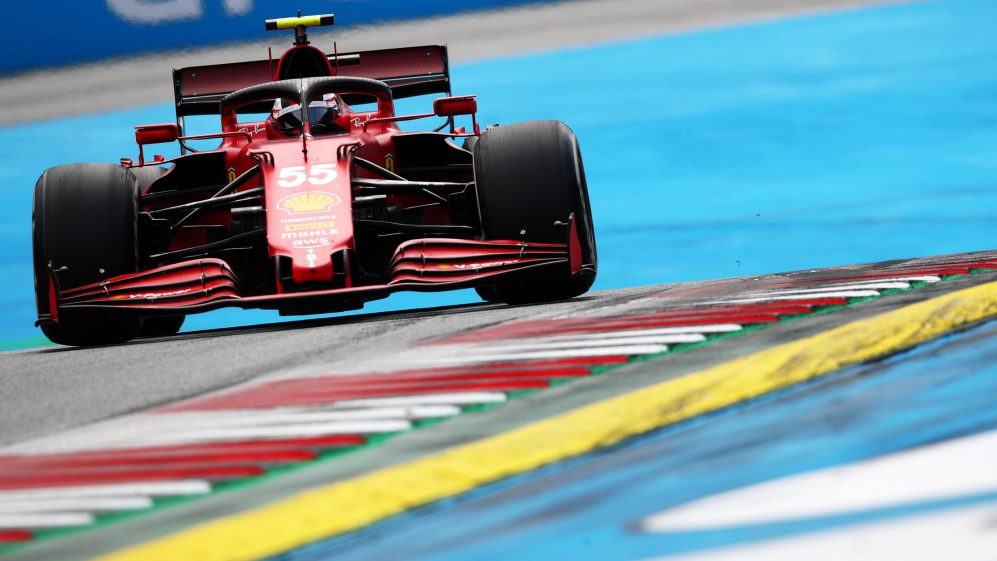 Carlos Sainz grabbed the fifth spot after starting at P10 during Sunday’s race with a brilliant late charge after running a long opening stint. He used his fresher rubber very effectively in the last few laps to overtake Ricciardo, and get close enough to Perez to pick up the place when the Mexican’s penalties were applied.

For his teammate, Charles Leclerc starting the race at P12, he had moments when fighting Perez, as the Mexican forced the Monégasque racer off the track twice during the Austrian Grand Prix. On lap 41 Perez Checo drove the Ferrari driver towards the outside of Turn 4 while the latter was attempting a move around the outside, which put Leclerc into the gravel. And even before the drivers get over the incident, the Mexican again shoved Leclerc in the gravel, at Turn 7. However, the Ferrari racer faded towards the end to come home in eighth. All in all, a good recovery for the Italian team after a disappointing qualifying. 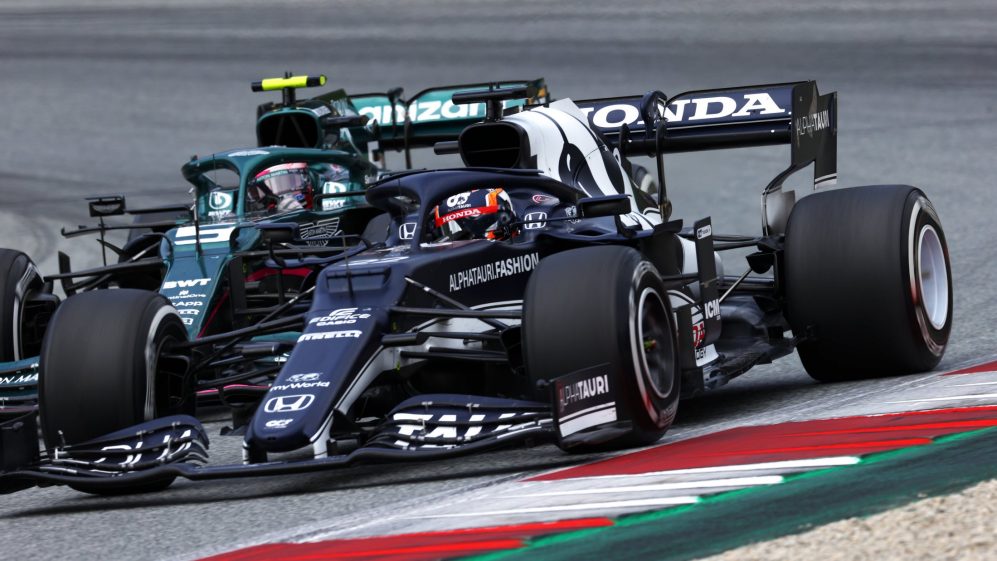 Charles Leclerc wasn’t the only one getting involved in two incidents during the Sunday race, as Yuki Tsunoda, somewhat inexplicably, also picked up two-time penalties for cutting the line entries to the pit lane. With a total time penalty of 10 seconds, Yuki Tsunoda finished 12th on race day, after the weekend qualifier’s good run which placed him at 7th on the grid. Pierre Gasly also had a tough race day but managed to claim a spot in the top ten, after dropping three positions to 9th place. 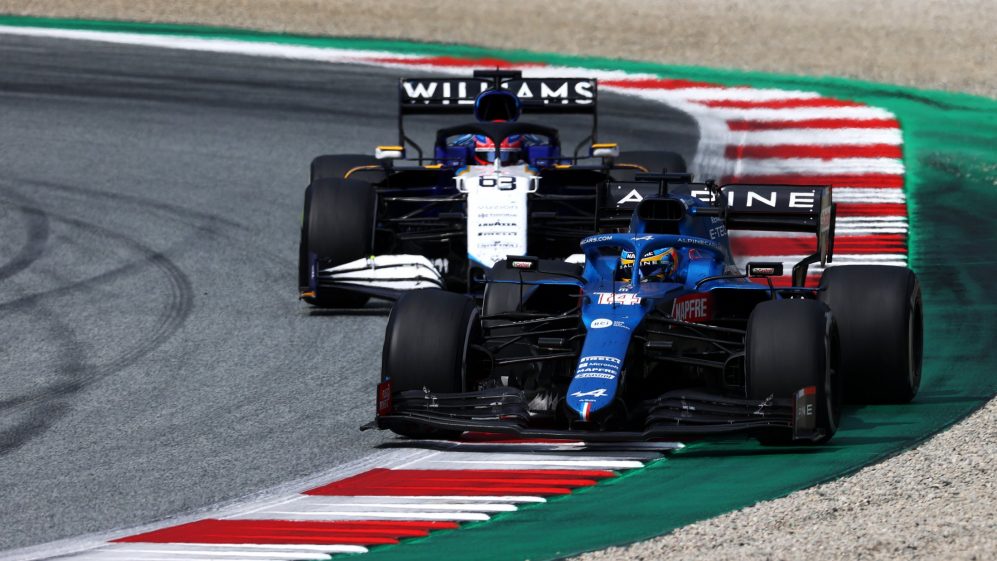 Right on Gasly’s tail was Fernando Alonso who secured the last points grabbing spot at P10, after starting the race from 14th position. Alonso’s A521 passed George Russell’s FW43B on the final lap to keep his streak of now four points-scoring finishes alive. However, his teammate was not that lucky on the race day. Esteban Ocon was pincered by Giovinazzi and Schumacher, resulting in a broken front suspension which sent him straight off for an early retirement from the race. 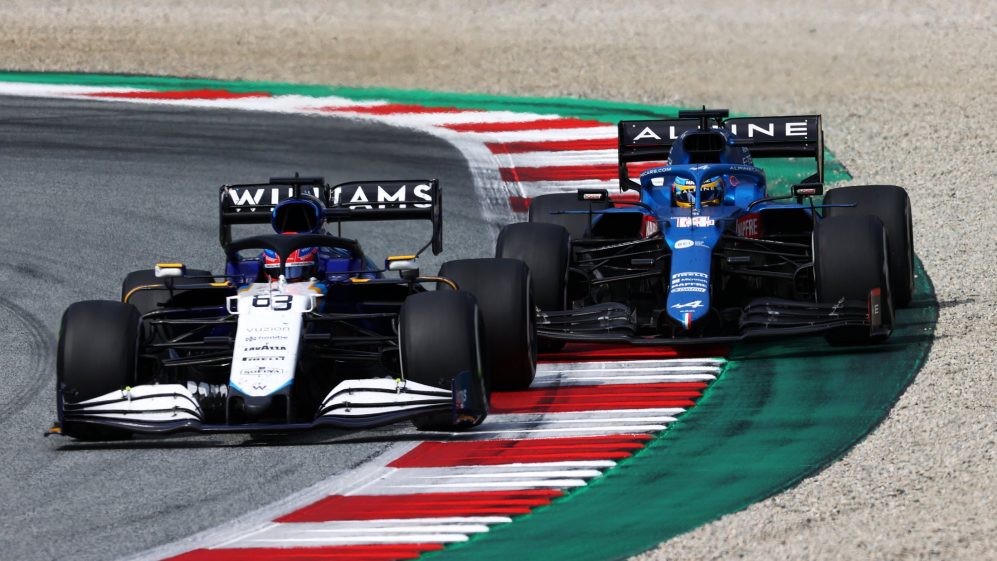 Starting eighth, George Russell’s initial hopes of points were dashed through the first few corners as a slow getaway dropped him out of the reckoning. But in a much more competitive FW43B, he managed to fight his way back up to P10. He held onto that position for lap after lap despite immense pressure from behind, but in the end, he was passed by Alonso towards the end of the race and finished with an agonising P11 once more.

As for his teammate Nicholas Latifi, he kept out of trouble but trouble found him anyway in the last. The Canadian-Iranian racer was handed post-race penalties by the stewards for failing to slow sufficiently for double-waved yellow flags, after a last-lap crash between Sebastian Vettel and Kimi Raikkonen. That meant a 10-second stop-and-go penalty, which translates to 30 seconds added to his race time. 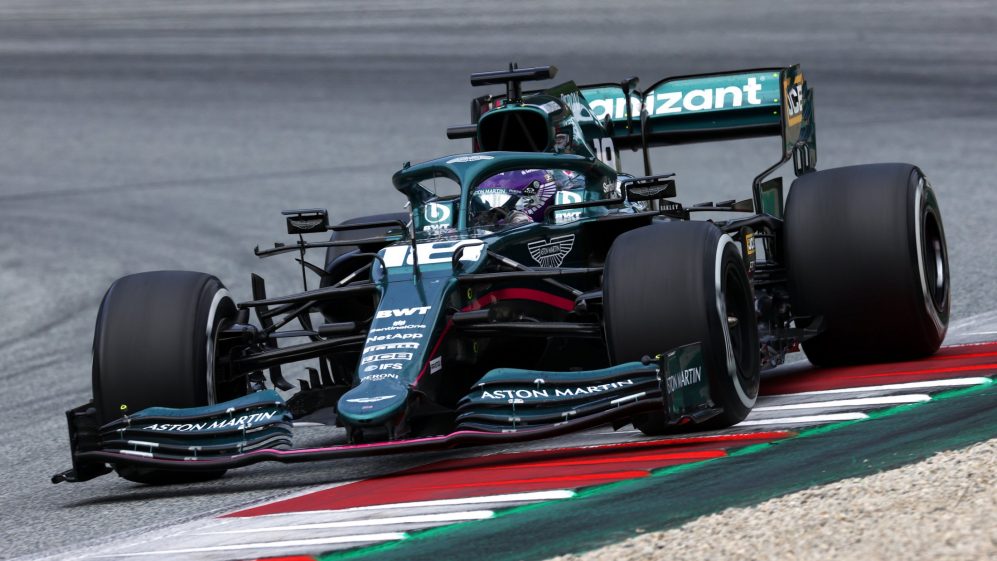 The British team was doing well in the early laps with both its drivers running in the top 10 in the first phase of the race, before having to pit quite early on for tyre swaps. But that dropped them into the traffic in the middle, compromising their second stints and leaving them both on a two-stop strategy, which proved slower today.

To rub salt into the wound, Lance Stroll got a time penalty for speeding in the pit lane, then his teammate Sebastian Vettel crashed with Alfa’s Kimi Raikkonen on the final lap when he tried to dive past the Finn. Raikkonen seemed not to see him and turned in, which pitched both cars into the gravel in a shower of carbon fibre at the exit of Turn 5, with the crash retiring the German’s AMR21 on the spot. Just not AM’s day, to sum it up. 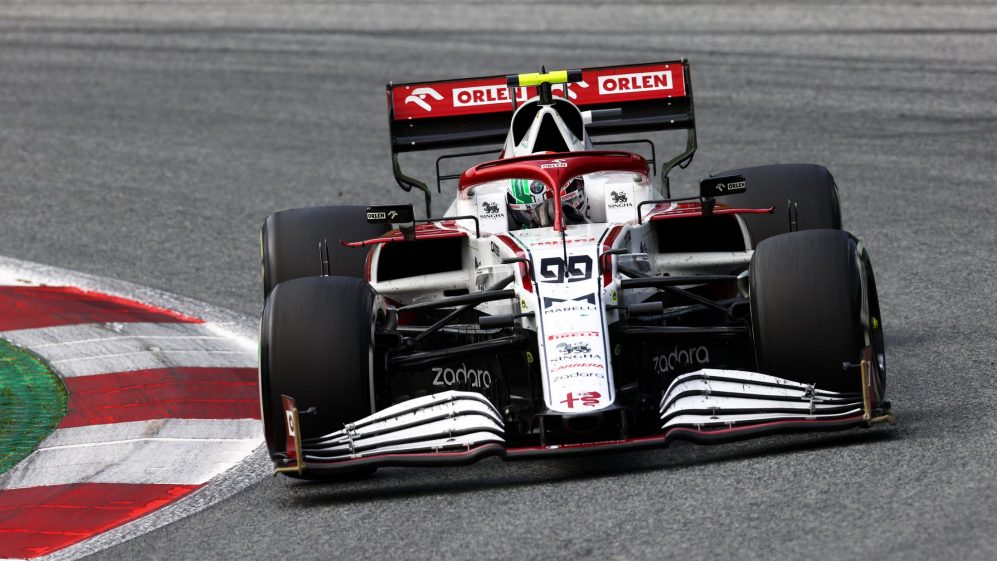 Raikkonen’s collision with his old teammate Vettel on the final lap of the Austrian Grand Prix, sent both of their cars spinning off into the gravel at the exit of Turn 5. While Vettel’s Aston Martin was not lucky to make it any further into the race, the Iceman’s C41 limped home in 16th place. However, Raikkonen was given a 20-second time penalty for causing the collision with Vettel.

Talking of his teammate, Antonio Giovinazzi too busted off his chance in the first lap itself as he made contact with Ocon at the start in a typical racing incident. While the Frenchman’s Alpine retired on the spot, the Italian’s car had to make a trip to the pits at the end of Lap 1, and at that point, any chance of a comeback was gone for him and Giovinazzi crossed the chequered flag at P14. 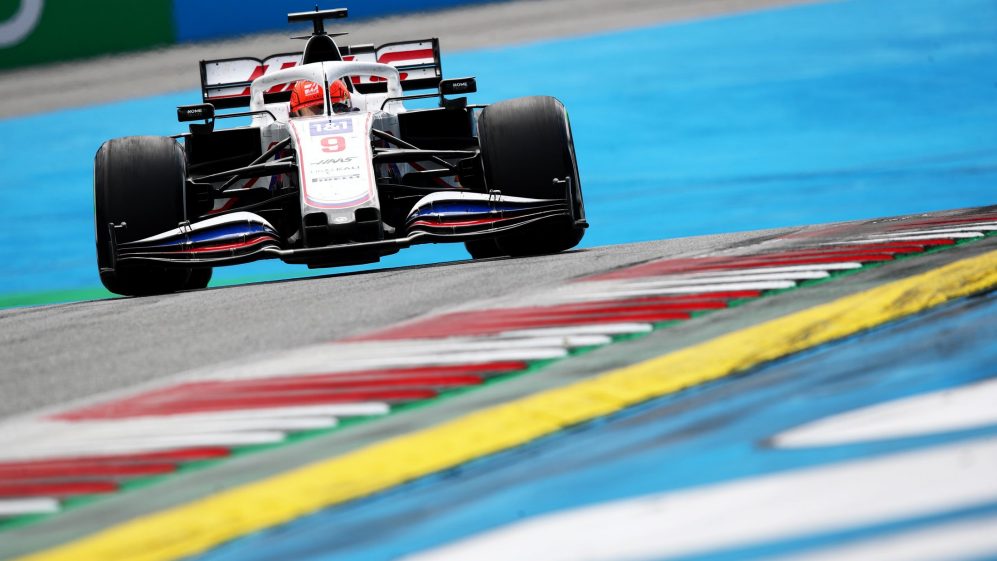 Finishing the race at their usual spots, the troublemakers did have their share of involvements in the Sunday’s eventful race. Mick Schumacher was involved in the Ocon incident at the start. However, after that, the former F2 Champion pulled off a clean race and finished the race at P18 with a focused driving, avoiding any further collisions and penalties.

Talking of penalties, his teammate and former F2 runner-up Nikita Mazepin, who crossed the chequered flag at P19 was handed a 10-second stop-and-go penalty, just like Latifi, post-race for the same reason of failing to slow sufficiently for double-waved yellow flags, after the Vettel and Raikkonen crash. 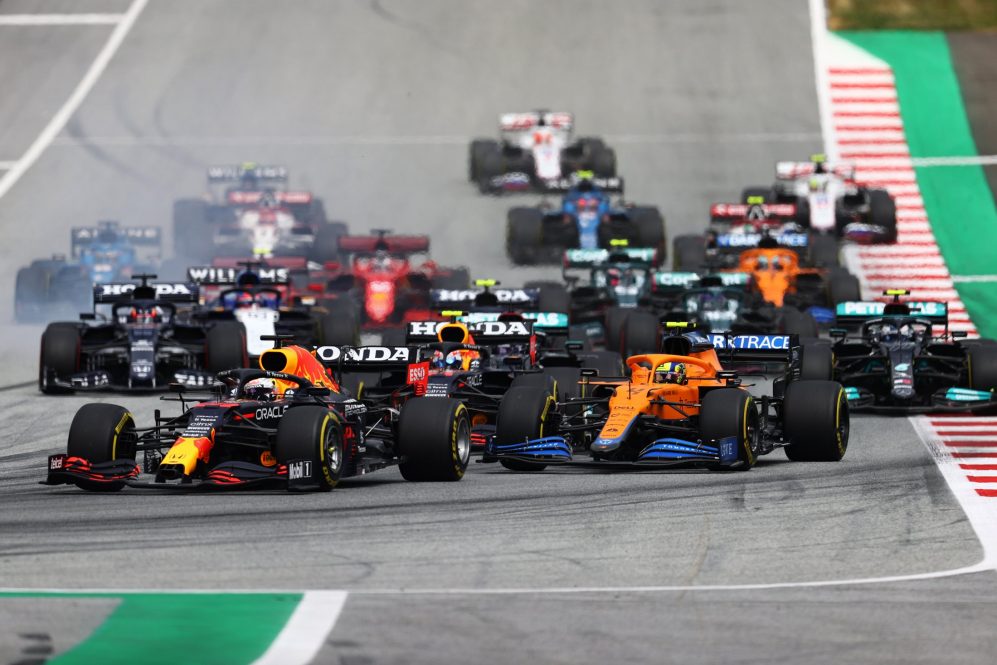 After a two week stay in Austria, the world’s best racers and their teams will now have some well-earned downtime before the next leg of the 2021 Championship will return on July 16-18 at the 2021 British Grand Prix at Silverstone. It will be a historic event, as it’ll mark the introduction of a new Sprint Qualifying format on the Saturday.

Porsche reveals the most potent Cayenne yet: the Turbo GT