Last fortnight action at Silverstone didn’t stop to the tracks. The British GP was followed by quite a fair share of ordeals, from Max Verstappen visiting Coventry hospital to Red Bull suing Mercedes for the July 18 crash. RBR’s bid to have a review of the 10-second penalty Lewis Hamilton was rejected yesterday, but not before it received a strong criticism from the Silver Arrow Camp saying, the move is aimed to tarnish the good name and sporting integrity of their lead driver. 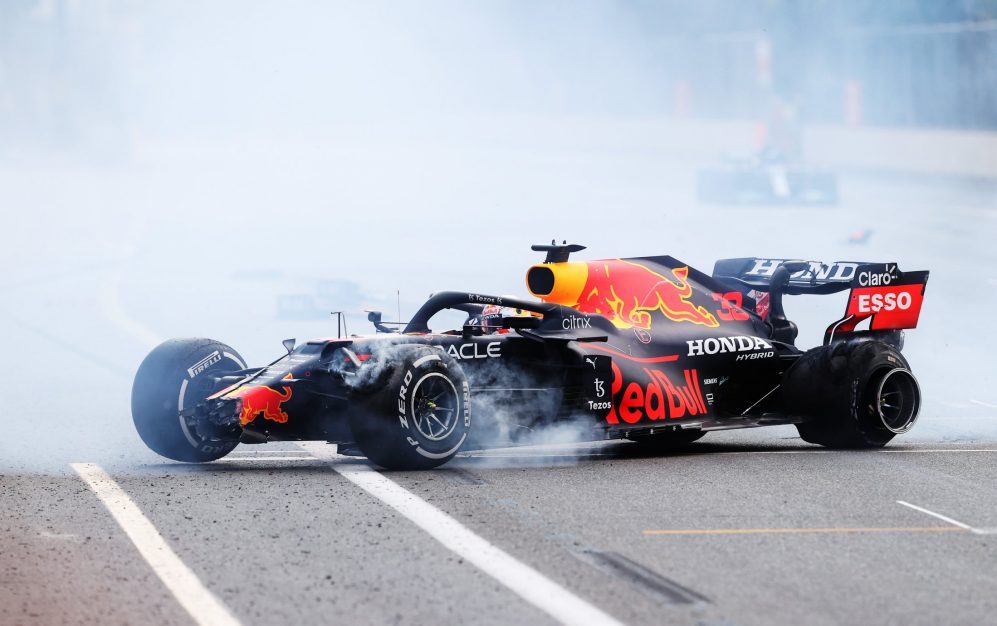 After the British GP, Verstappen called Hamilton’s celebrations “disrespectful” and Red Bull boss Christian Horner accused Hamilton of “dirty driving”. Mercedes team boss Toto Wolff lashed at Red Bull’s criticism of the seven-time world champion labelling it “below the belt”, to which RBR chief defended back by responding, “It was nothing personal with Lewis or the team, the statement didn’t question his integrity.” 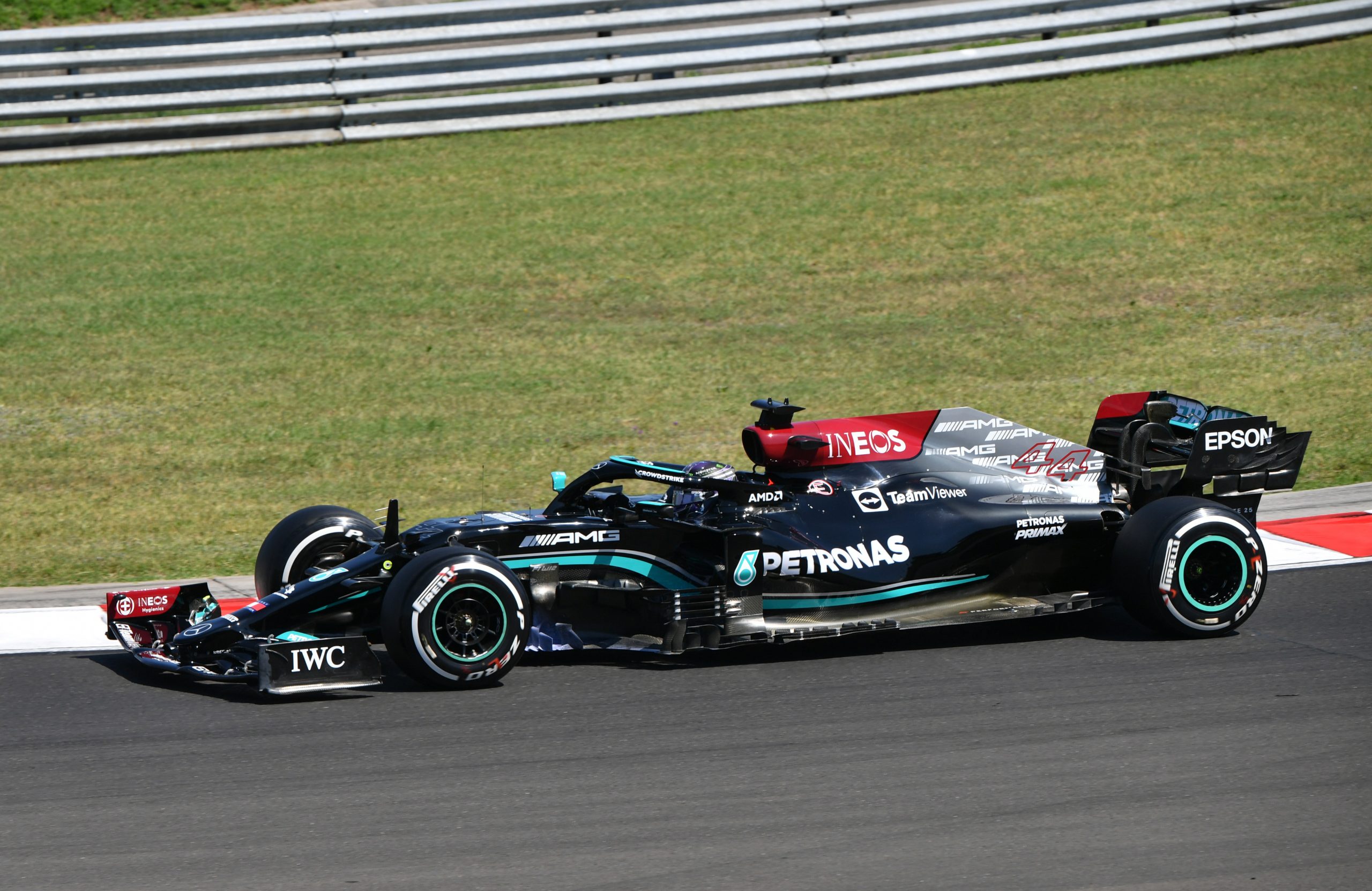 Anyways let’s leave the thing of the past to the past and focus on the Hungarian Grand Prix scheduled for this Sunday. The world’s fastest drivers reached Mogyoród along with their respective rides and teams for the eleventh Grand Prix of the 2021 F1 Championship. The free practices kicked off today, and well, Max and Lewis were again duelling neck and neck in both the runs, but it was Valterri Bottas who stole the show by the end of the day with a P1 at the second session and the fastest lap time. Let’s see how was the day for each camp, one by one. 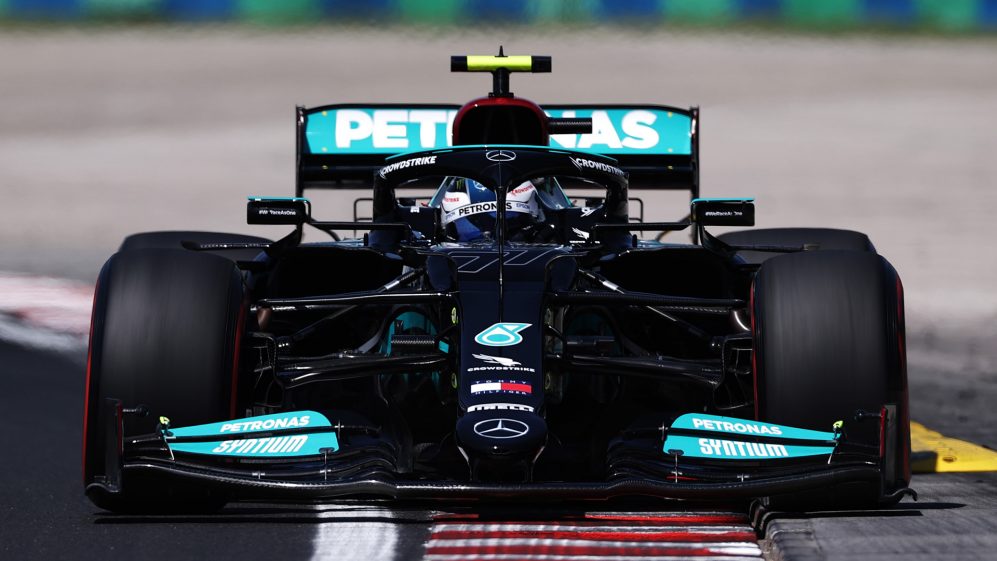 If the heat between Mercedes and Red Bull wasn’t enough for everyone, the Hungaroring made sure to keep things literally hot with track temperatures of over 60 degrees. However, Valtteri Bottas proved he could handle the heat in Hungary by topping second practice and finishing second in FP1. His teammate Lewis Hamilton, closely followed his Finnish partner in both the sessions, with a respective third and second position in FP1 and FP2. The Silver Arrow duo faired well in their F1 W12s on a circuit widely tipped to suit rivals Red Bull’s RB16B. They will be looking forward to repeating their practice performances to claim the top position on the Sunday grid. 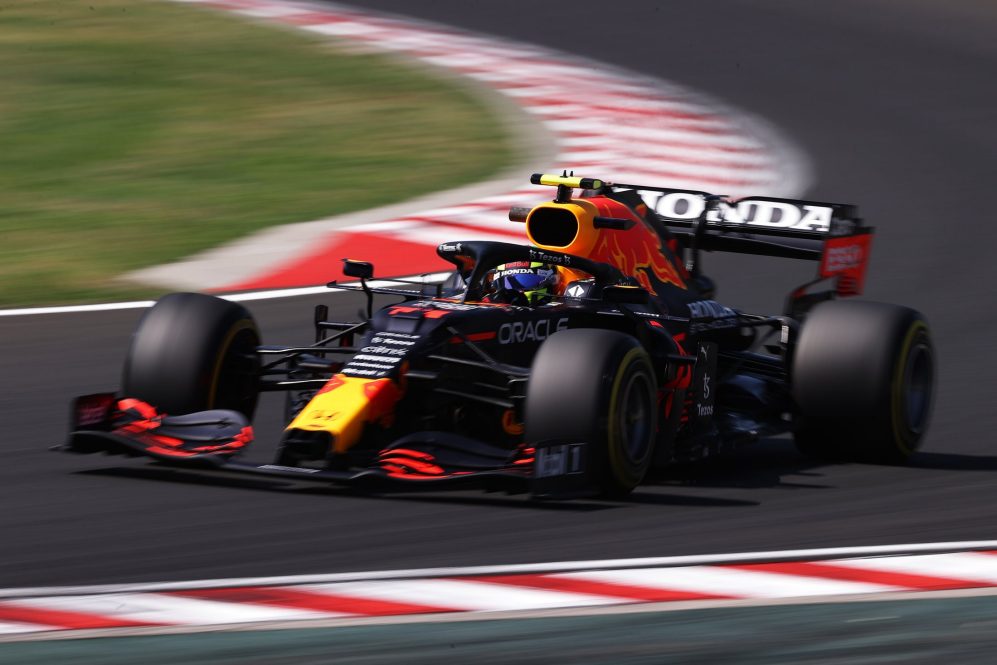 After getting ruled out of the British GP with a heavy accident, Max Verstappen had come out of the gate strongly in Hungarian GP’s FP1, heading the session from Bottas by 0.061s. However, in the qualifying simulations of FP2, Verstappen couldn’t get within 0.298s of the Finn’s session-leading time, and he wound up P3, trailing behind the second Mercedes of Lewis Hamilton – with whom the Dutchman made the catastrophic contact at the previous round in Silverstone. Overall the young powerhouse looked good in shape and will surely give a tough fight to the Mercedes duo for the pole position.

As for his teammate, Sergio Perez, it was a trickier day, and admitted that he’s never particularly enjoyed the Hungaroring track. During FP1 Checo finished 0.911s off Verstappen’s leading time down in P9, while the second session proved to be better for the Mexican driver who improved to P5. Won’t be surprised if he secures a spot in the top 3 of the Sunday grid. 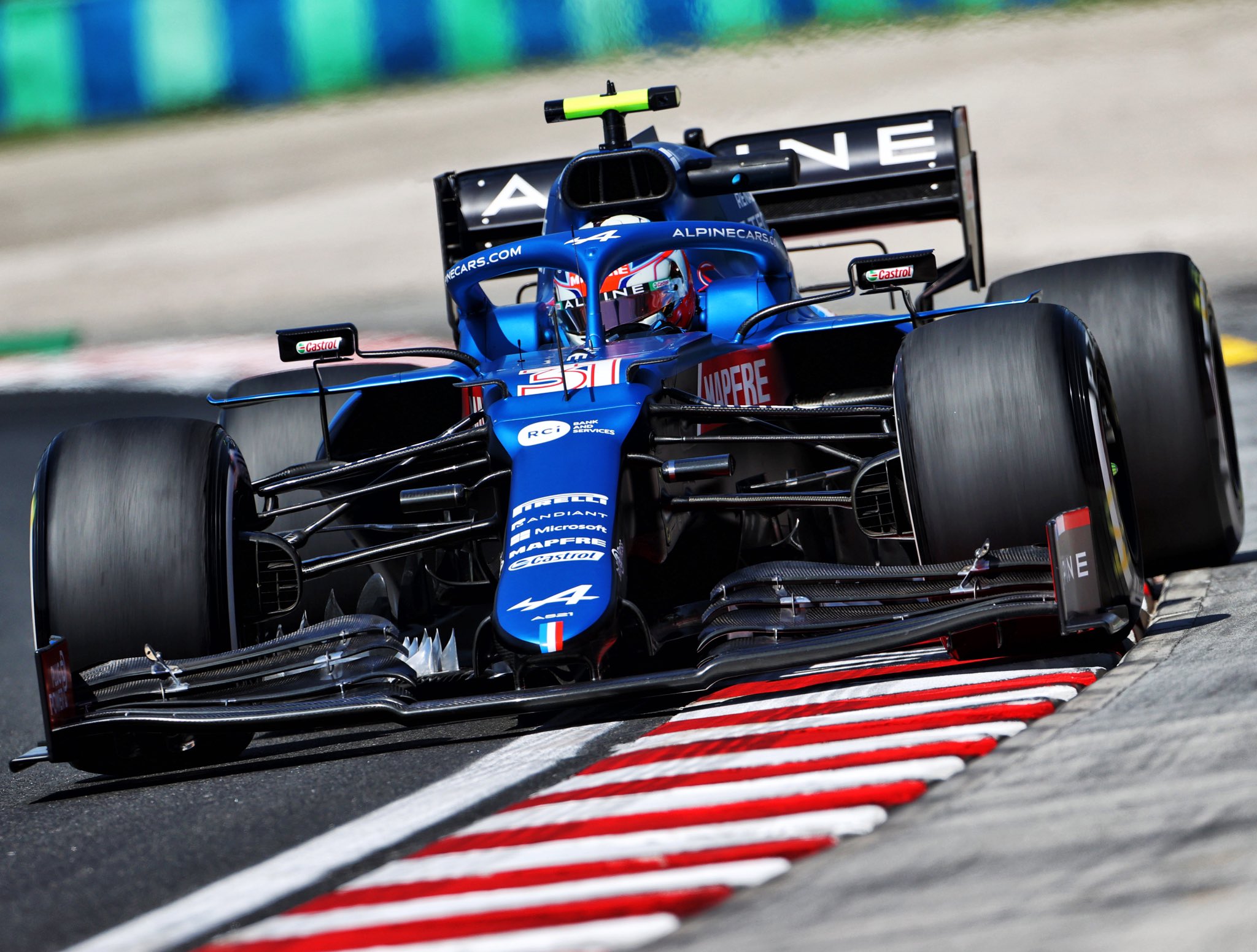 Tearing the two RB16Bs was Esteban Ocon’s A521. The French Alpine racer did well to secure the fourth place after he had been required to stop by the pit garage due to a loose tape around the car’s sidepods and airbox during the early laps. Overall, Ocon looked confident as he himself claimed on Thursday, following a change of chassis.

Now, coming to the birthday boy, Fernando Alonso who celebrated his 40th birthday doing what he loves the best. The man is a proof that age is definitely just a number. With the majority chassis filled with under 25 youngbloods, the Spaniard showed the importance of experience as he shrugged off an early Turn 4 spin to secure P7 at the end of the day. Well, we don’t think there’s a need to mention how fast the Alpines are, literally every week, do we! The boys themselves are doing a pretty job to remind everyone of that. 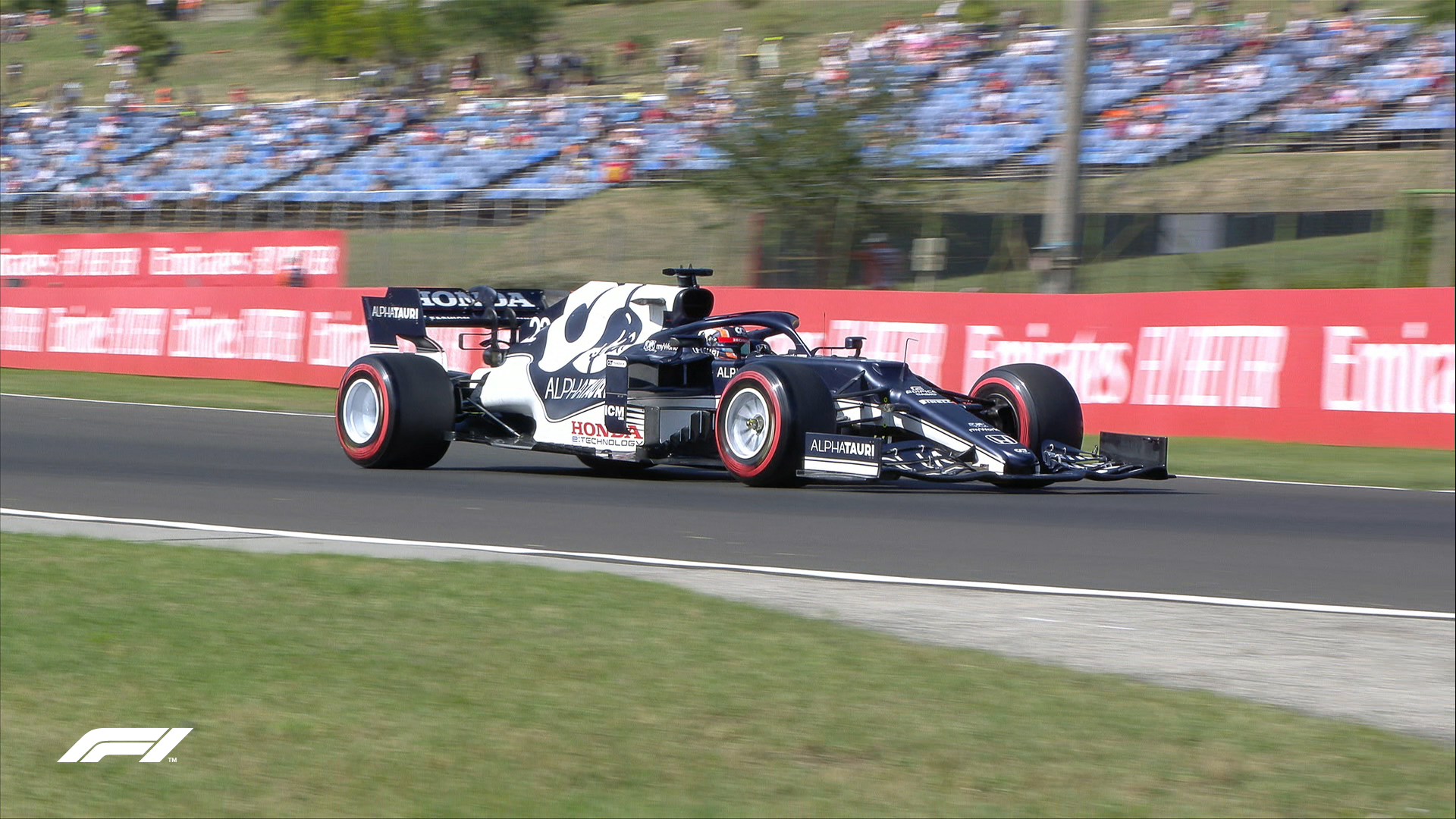 Pierre Gasly claimed sixth for AlphaTauri on the first day of the practice runs, after the Frenchman endured what he called his “worst weekend of the season” at Silverstone two weeks ago. But the misfortune doesn’t seem to leave the AlphaTauri camp as of yet, as his teammate Yuki Tsunoda, who after his Turn 4 hit into the barrier in FP1, spent the majority of FP2 in the garage. The Japanese racer’s AT02, however, managed to emerge in the final minutes of the FP2 securing the P17. The rookie got his weekend off on the wrong foot in Hungary and will be looking more cautious during the rest of the time at the Hungaroring. 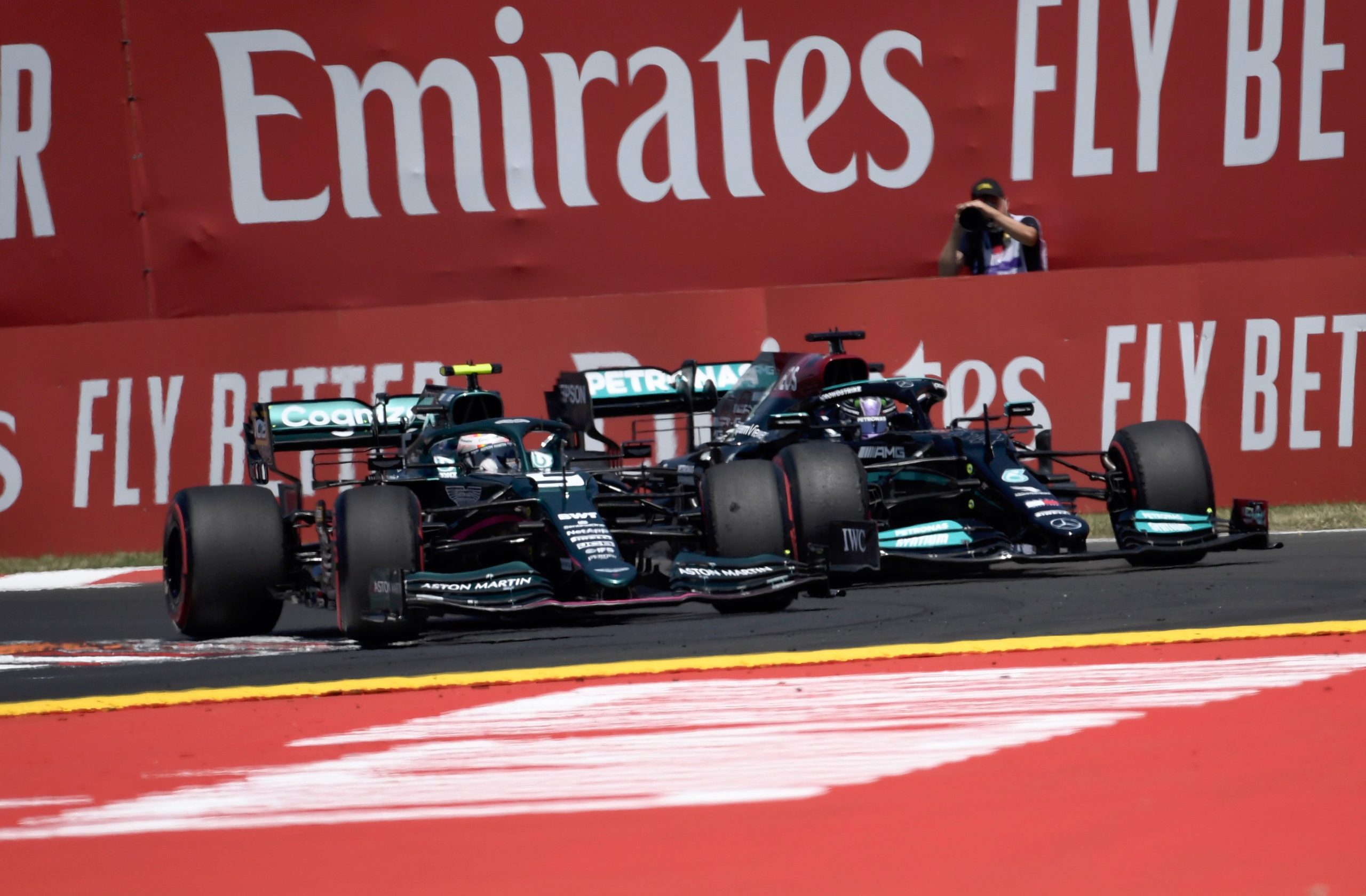 Sebastian Vettel, the man who knows how to win people’s hearts both on and off the circuit. The German racer was not just seen at Silverstone after DNF in British Grand Prix to help collect litter, but the 4-time World Champion is also showing his support to the LBGTQ community during his stay in Hungary by wearing a special Pride helmet for this weekend. Talking of his performance Vettel finished P8, the early move to the soft tires certainly paid dividends. His track partner, Lance Stroll also did well to secure P10, completing a double top 10 showing for the team in green. 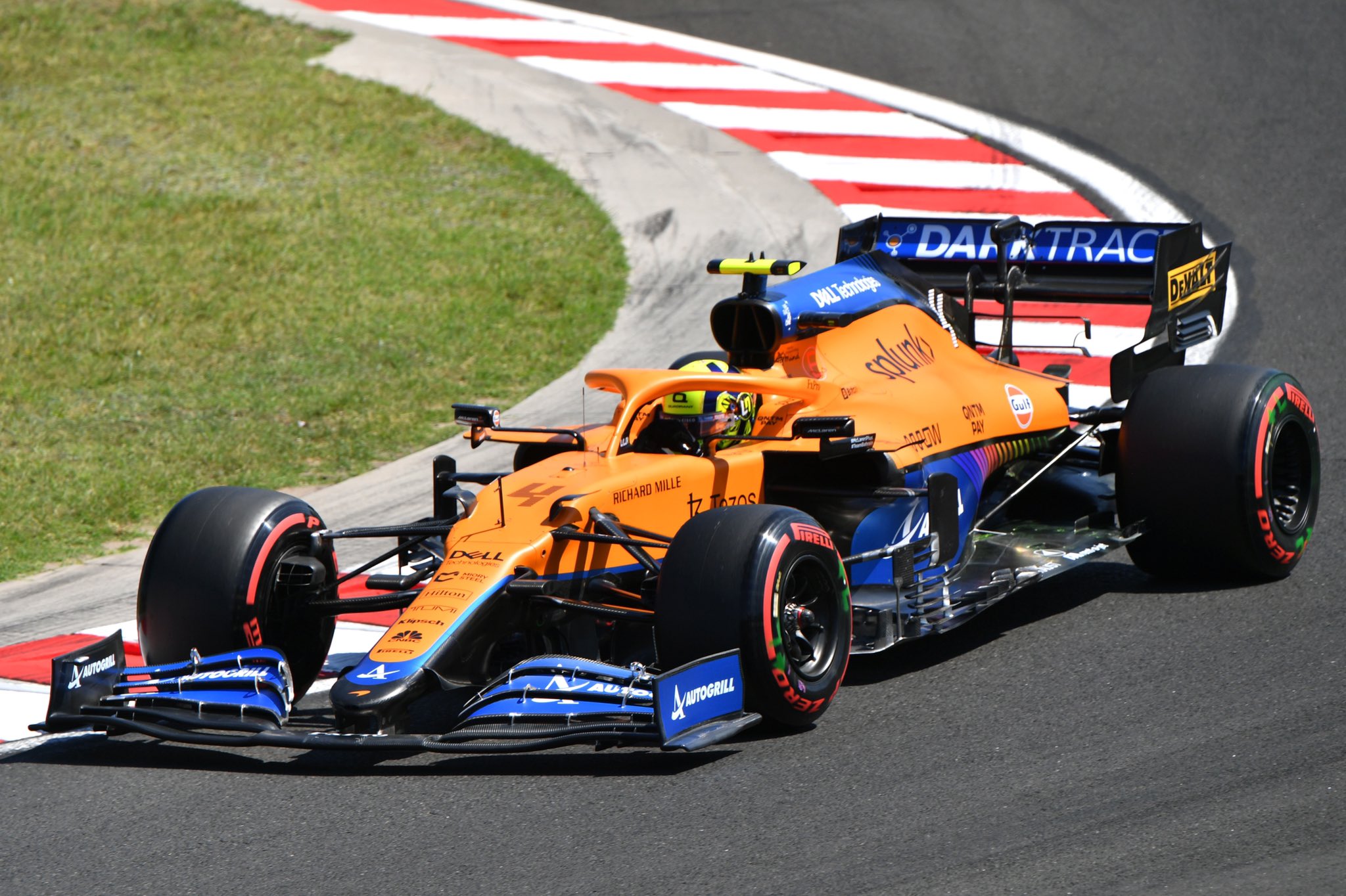 Lando Norris didn’t have a day he had hoped for and only managed to cross the chequered flag ahead of the second Aston Martin at P9. Things looked even worse for the 2014 Hungarian Grand Prix winner Daniel Ricciardo who was adrift of his McLaren teammate for the second session in a row, as he took P13, 0.4s behind Norris. McLaren rarely shows their hand during Friday practice but both the MCL35Ms were on the back foot more than normal on the opening day in Budapest. Both the McLaren drivers believed the heat made the cars tricker to drive. 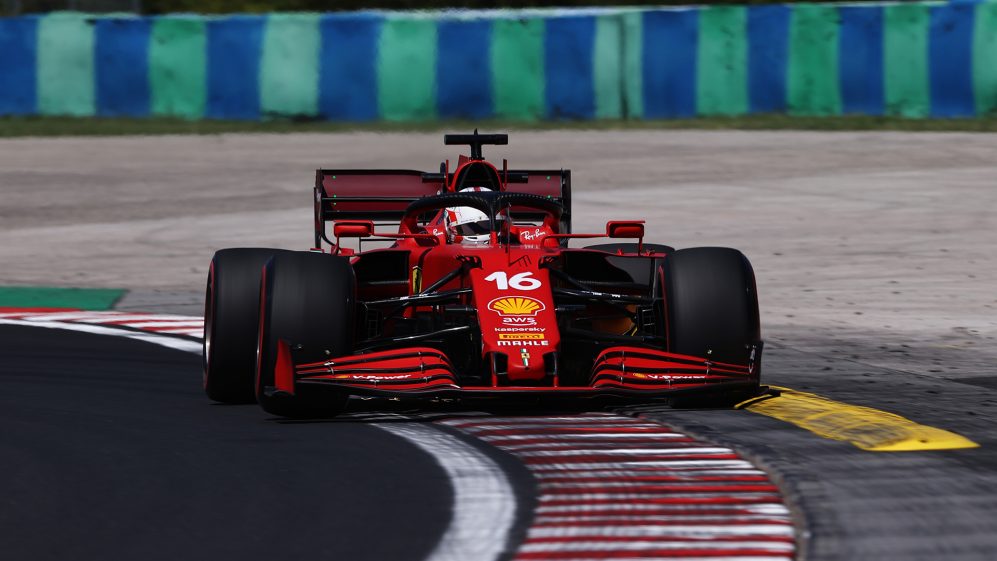 McLaren wasn’t the only team heavily affected by the temperature at Hungaroring, the Ferrari duo suffered equally bad, if not worse. The Prancing Horse is a favourite at a Hungaroring track which is often described as being like Monaco without the walls – and with Charles Leclerc having taken pole in Monte Carlo earlier this year and a podium at British GP, not just hopes but bets as well were really high. But neither he nor his teammate Carlos Sainz could crack the top 10 on Friday afternoon, even after the Spaniard secured P4 earlier in the day during FP1. Both SF21s crossed the finish line one after another, with Leclerc settling for P11 and Sainz trailing behind him at P12. 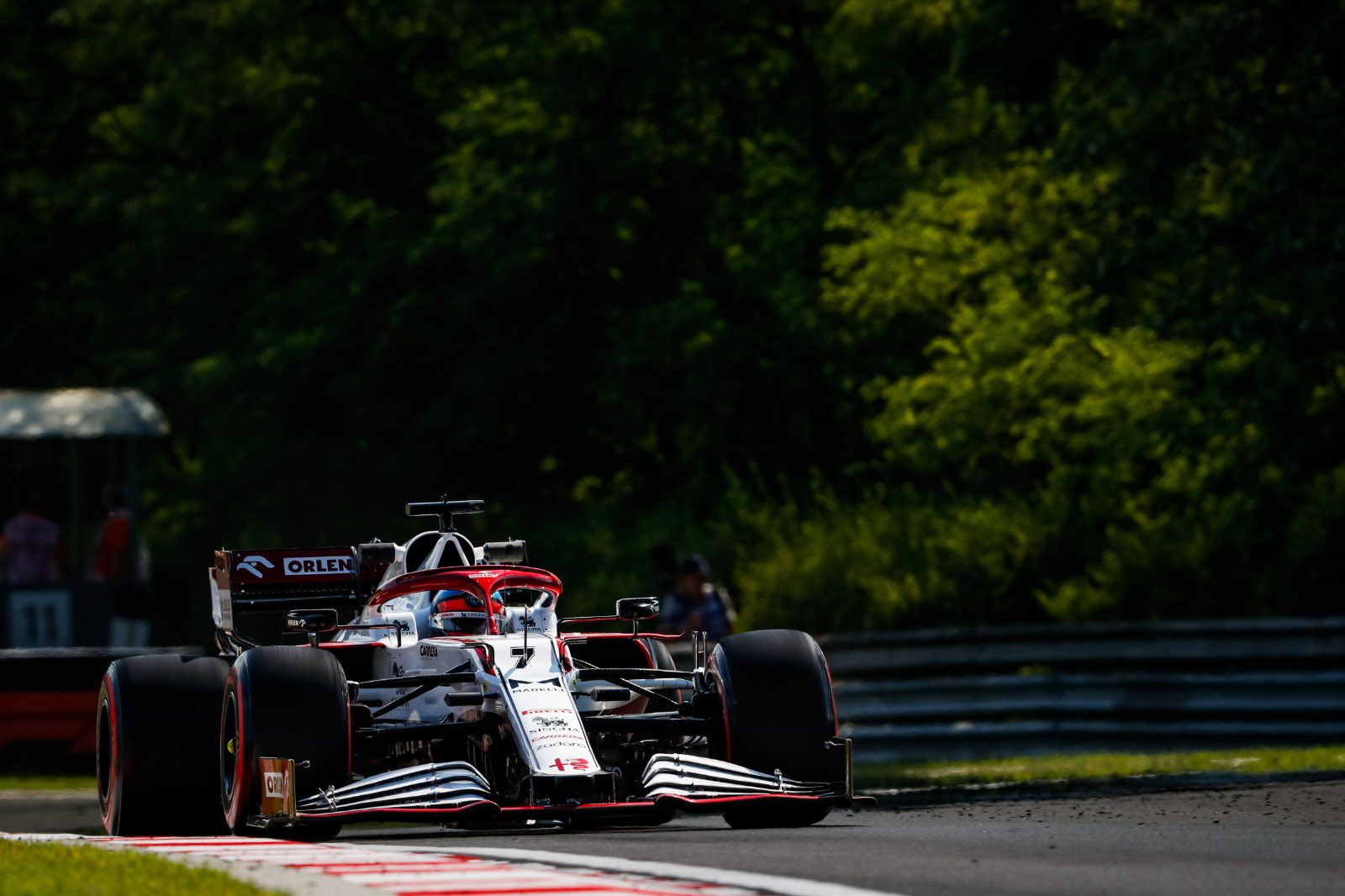 Another Ferrari team, which didn’t manage to secure a top 10 spot during the Day 1 practices at Hungarian GP. Alfa Romeo started the practices in the usual manner, with three drivers. Robert Kubica started the session in place of Kimi Raikkonen during FP1 and finished 18th, ahead of Haas’s Nikita Mazepin and his teammate Antonio Gionvinazzi who had been confined to the garage for much of the session with a technical issue. In the afternoon, Raikkonen claimed 14th in his first outing of the day in the Alfa Romeo’s C41 during FP2. However, Giovinazzi only managed to climb just one position up and settled in the 19th spot. 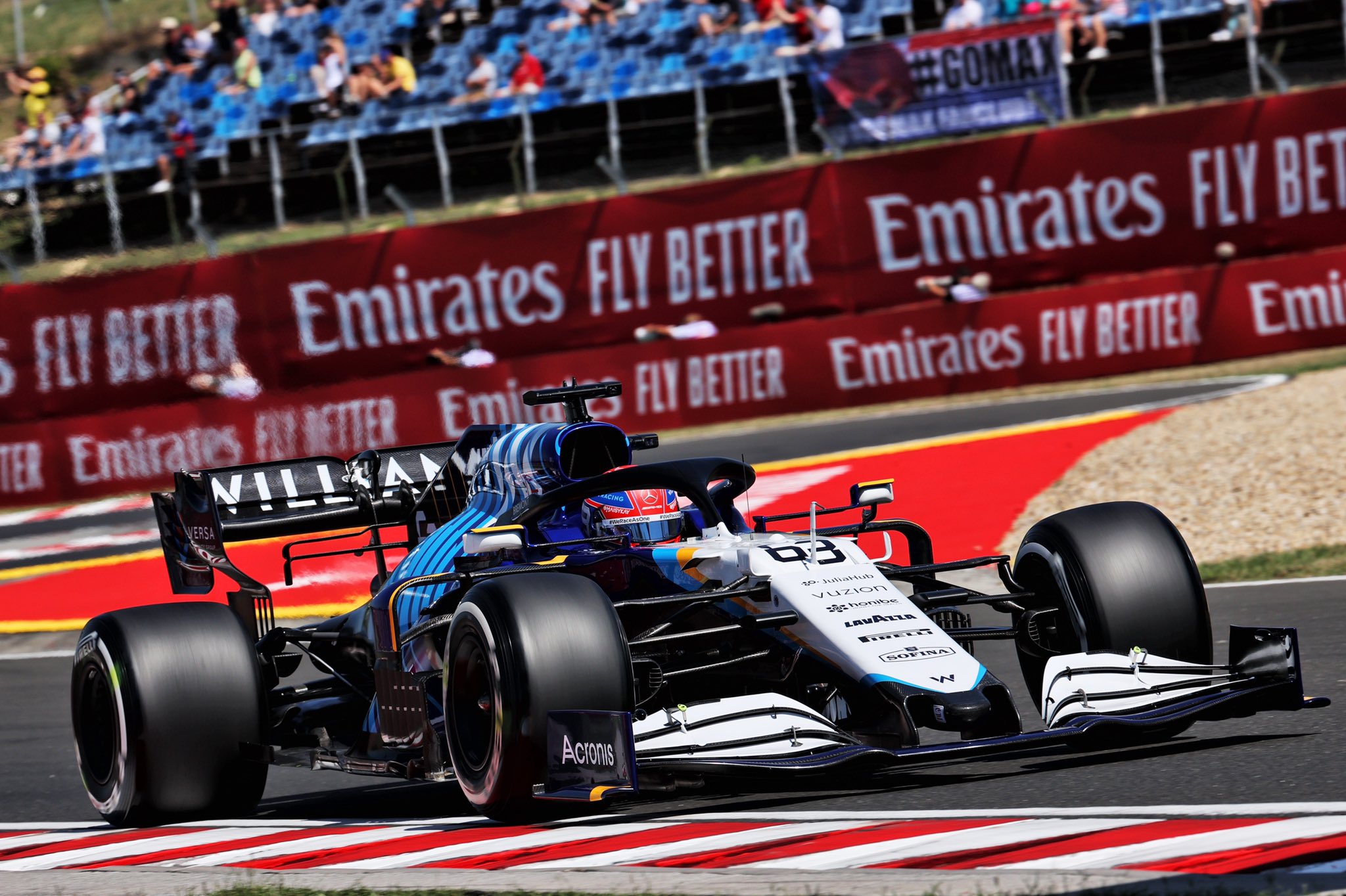 Nothing special from the Williams pair in today’s practice who lined up 15th and 16th after the end of the day, with George Russell some two-tenths ahead of Nicholas Latifi, the exact spot they finished during the first free practice at the opening day of Hungarian GP. 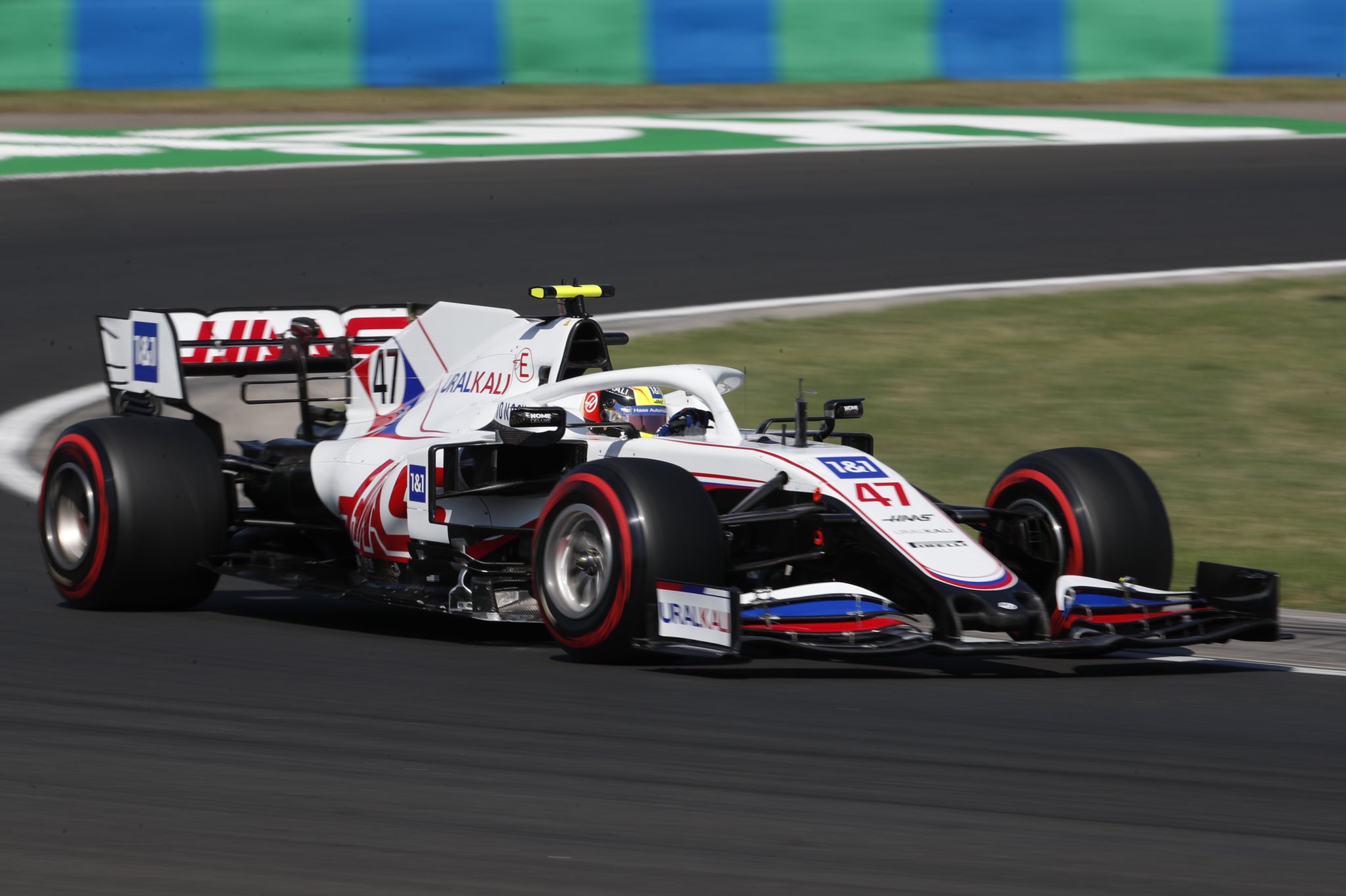 If only some things change! Usual sighting at the back, Mick Schumacher led Nikita Mazepin in his VF-21s. Both Formula 2 promotees slipped a position each from their FP1 standings during the afternoon practice session and finished with a respective P18 and P20 for Haas.

Overall a hot and exciting day during the opening runs at Budapest, and we’re now looking forward to tomorrow’s final practise and qualifying session, when all the teams will fight to secure their spots for the main grid at the Hungarian Grand Prix. 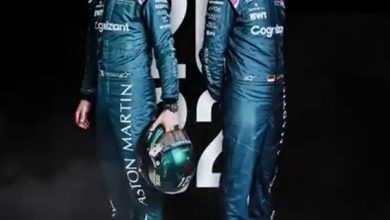