F1 is back for testing, though this time at Sakhir in Bahrain! The new 2022 cars had taken to the track in Barcelona 2 weeks ago, which yielded mixed results for the teams and drivers. The biggest development we have seen since the end of the Barcelona test has been the firing of Nikita Mazepin due to the Russia-Ukraine war effectively eliminating any Russian influence from the sport, and the recent re-appointment of Kevin Magnussen by the Haas F1 team.

Ferrari seemed to have the measure of the field in the morning session, though we saw a major development- Mercedes stole all the thunder. They have come up with this radical new design *almost* eliminating the sidepods from their car entirely! This new change had many of us surprised and shocked – not least of which were their title rivals from last year, Red Bull! Although, the heavy rumours surrounding this mellowed the surprise element. This test is also the final time teams can test out and find out the theoretical limits of the cars before racing starts in just a week’s time at this very venue. There was a fair bit of drama all throughout the day, so let us take you through the events and happenings of the day. 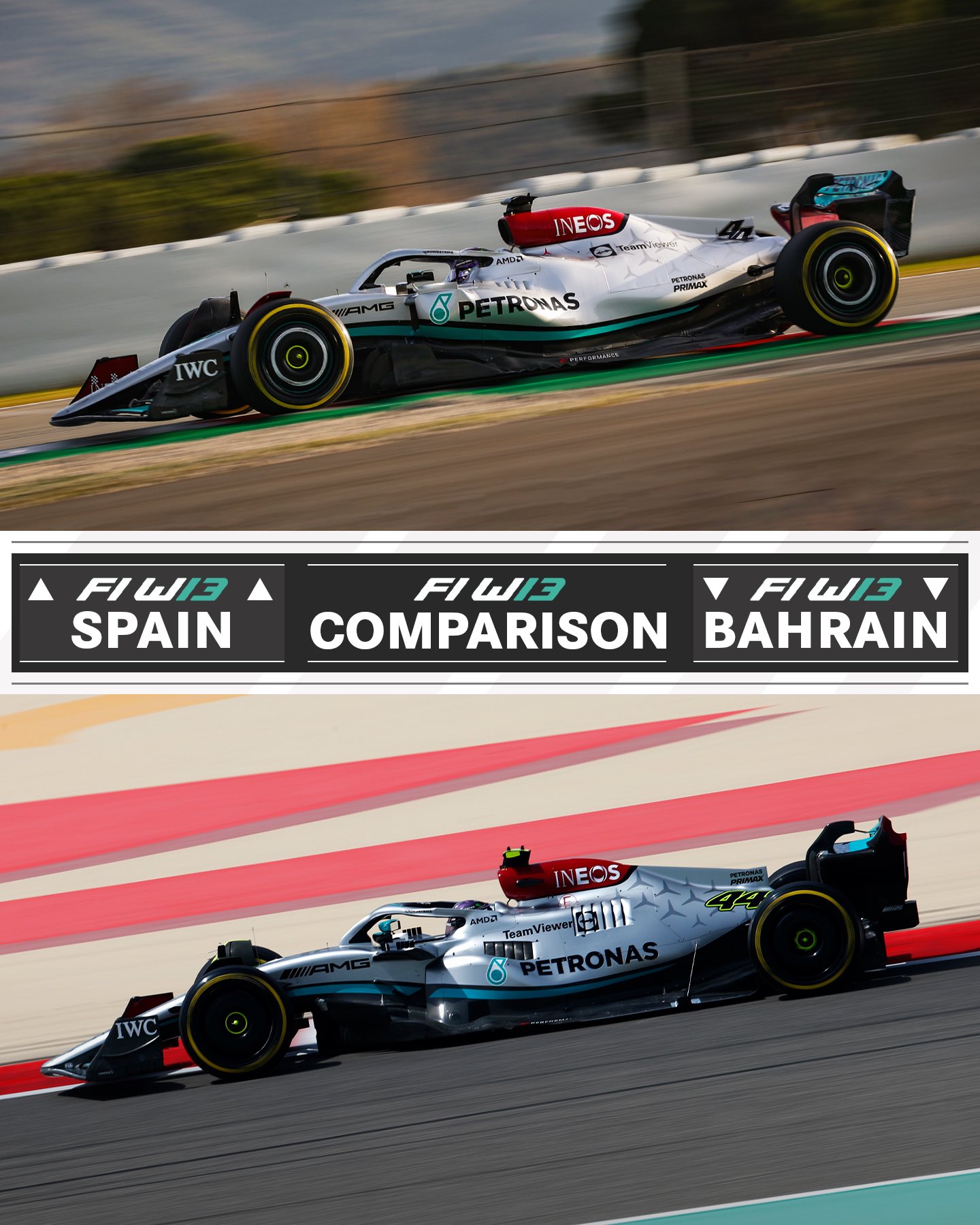 Teams had a lot on their hands, and some decided to give the entire day to a particular driver. New signing Kevin Magussen didn’t get any running today, neither did his teammate Mick Schumacher. Moreover, Haas were allowed only 2 hours and will be allowed only 2 hours for the rest as well due to being late to the party. They had issues with their freight and cargo getting stuck while in transit from the UK, and hence could not get their car ready in time for the morning session. Yuki Tsunoda, Nicholas Latifi and Daniel Ricciardo too didn’t get in the driver’s seat with some of them finishing up their media appearance duties. Ricciardo was feeling a bit under the weather and decided to forego the first day of the Bahrain test.

Mercedes: Lewis Hamilton in the morning and George Russell in the afternoon.

Ferrari: Charles Leclerc in the morning and Carlos Sainz Jr in the afternoon.

Red Bull: Sergio Perez was in the car the entire day.

Alpine: Esteban Ocon in the morning and Fernando Alonso in the afternoon.

Aston Martin: Sebastian Vettel in the morning and Lance Stroll in the afternoon.

McLaren: Lando Norris was in the car the entire day.

AlphaTauri: Pierre Gasly was in the car the entire day.

Alfa Romeo: Guanyu Zhou in the morning and Valtteri Bottas in the afternoon.

Williams: Alex Albon was in the car the entire day. 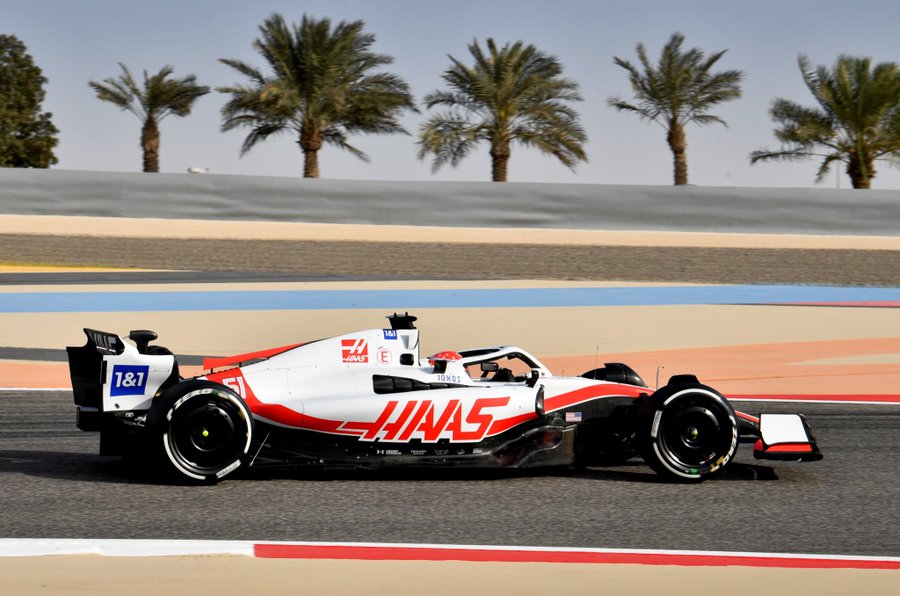 A Brief Rundown Of Events

Ferrari and Charles Leclerc were unstoppable in the morning session, going quickest by a long shot and early in the session as well. Alex Albon thrust Williams up to second place and was followed by Sebastian Vettel in the Asdton Martin in 3rd place.

Sergio Perez was fourth and completed the most amount of laps in the morning session with 70 laps under his belt. He was followed by Lewis Hamilton who was in the new sidepod-less Mercedes, and behind the 7-time champ was Esteban Ocon in 6th.

Chinese rookie Guanyu Zhou finished 7th despite having an issue wherein he had to stop in the pitlane. He was followed by Lando Norris who was a distant 8th and had to sit out most of the session due to technical issues, completing only 21 laps. Pierre Gasly rounded up the pack and finished P9 to close out the morning session.

Pierre must’ve taken finishing last a bit too much to heart, for he went purple in the evening session and for the overall day as well! He set a time of 1:33:902 under the lights at the Sakhir track, followed by the Ferrari duo of Charles Leclerc and Carlos Sainz in P2 and P3 respectively, the latter of whom took over driving duties for the afternoon session.

Lance Stroll had a decent outing for Aston, finishing 5th and even battling with Alonso in the process! Lando Norris improved his position to 6th for the overall day’s running while Valtteri Bottas finally got a few laps under his belt and finished P7 in the end. Perez meanwhile went for a spin and hence couldn’t improve on his time, also bringing out the red flag in the process.

George Russell took P9 in the end, while Fernando Alonso could only manage 12th in the end. Haas also managed to get their car up and running in time for the afternoon session, and gave reserve driver Pietro Fittipaldi a chance to whip the Haas around the track, though the Brazilian finished in last place with a laptime over 3.5 seconds slower than Gasly’s.

A few things were very obvious from just this first day of testing. Firstly, it must’ve felt so weirdly nostalgic for all of us to see the F1 cars back out on track and a proper livestream of it as well- for the Barcelona test was hosted more privately than usual for reasons best known to F1 and the FIA themselves! (hint: Bahrain gave them money, and F1 likey-likey some money!)

Porpoising was another debate for today, with a video of Pierre Gasly on one of his laps suffering from it in quite a violent manner! The topic of porposing could be a hot one for the entirety of the season, and you can read more about it by clicking here. We are also yet to see the likes of Kevin Magnussen, Mick Schumacher, Nicholas Latifi, Max Verstappen, Yuki Tsunoda and Daniel Ricciardo thrash the cars around the Bahrain circuit, so let’s see when they get the opportunity to drive!

Another weird sight was how much difficulty each team and driver was having in the slow corners, with the cars just seeming to slide out of control without much input on the driver’s end. Lockups and mistakes were common, so can it just be put down to drivers finding the limits, or is it a case of drivers actually finding the slow corners difficult to take in these tricky new 2022 cars? Multiple drivers said that the fast corners were okay and straight line speeds were great as well, but the slow and medium-speed corners become a bit challenging. Will this improve by tomorrow? Do stay tuned, for we will post a brief rundown of tomorrow’s session as well.

As for the teams, we don’t believe the porpoising is an issue at all. The teams are merely testing the limits of the cars to find a balance. Once they get it, they will most certainly setup the suspension and the cars in a way to avoid any issues whatsoever. So, sit back and relax for we can’t have the pecking order until the quali for bahrain next week. 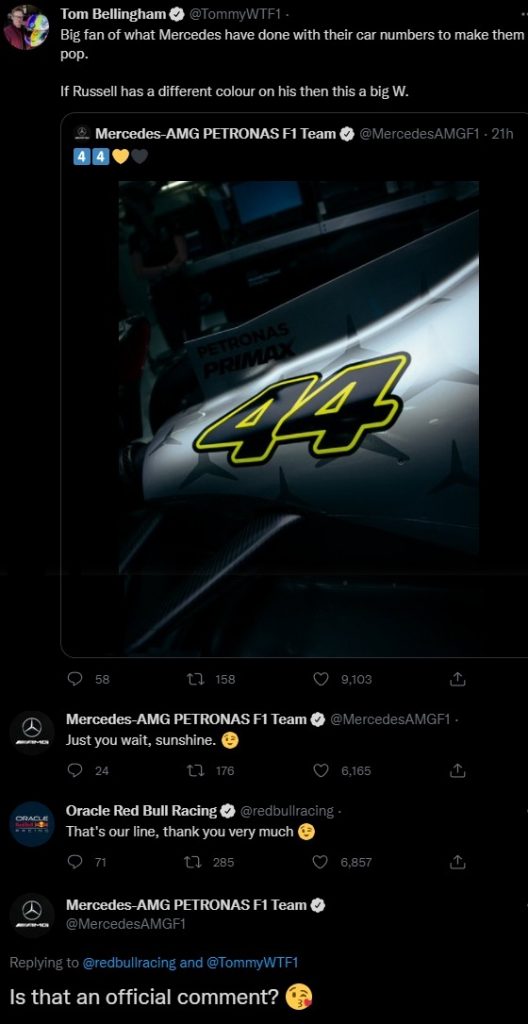 All in all, nothing is a major issue except the fact that Mercedes could be around 1.2s a lap faster per their simulator. So, major issues for others not Mercedes. In fact, the very reliable publication Auto, Motor und Sport (AMuS) quoted Mr. Horner saying “The new Mercedes violates the spirit of the regulations. For us, some parts are not legal.” Although, RedBull racing have denied all such claims and said Horner gave no official comment. I don’t believe Horner would say that because when was the last time we heard him complaining in F1? (Hint: Always.) Mercedes had quite a response to this via their twitter.