The Innova Zenix is a slight change from the existing MPV like design of the Innova Crysta and more in the direction of the Fortuner. The side profile will still remind you of an MPV like Innova with smaller wheels than a proper 4×4 SUV but, it definitely is more smarter and the rear overhang no longer depicts a typical MPV look. Good or bad? Well, that is a subjective opinion. To us, it is definitely better, sharper and smarter looking. Add that slightly larger wheels that suit the profile of being an SUV more and it kind of completes the look. This is even more obvious when you look at it from the front as we see a large hexagonal grille and a much more butch stance. Wrap around dual LED projector headlamp units remind you of the Crysta while the DRLs on the bumper give it a masculine SUVish look. The taillights are finally LED units as against the Innova Crysta which still did NOT offer LED taillights. Overall, the change is very well brought in and brings the MPV more in line with the expectations from a car in 2022.

The interior is a similar story to the exterior design. It is completely new and yet, it will remind you that the car is a luxury MPV. The layout and design is very similar to the recently launched Urban Cruiser Hyryder with the free-standing 10″ infotainment screen (9″ for lower models) and a part digital 4.2 inch MID. The transmission lever attached right below the aircon vents at the front might not be to everyone’s taste though since, the “luxury” quotient somehow still lies in the centre console/armrest housing the gear lever irrespective of a manual or automatic transmission. 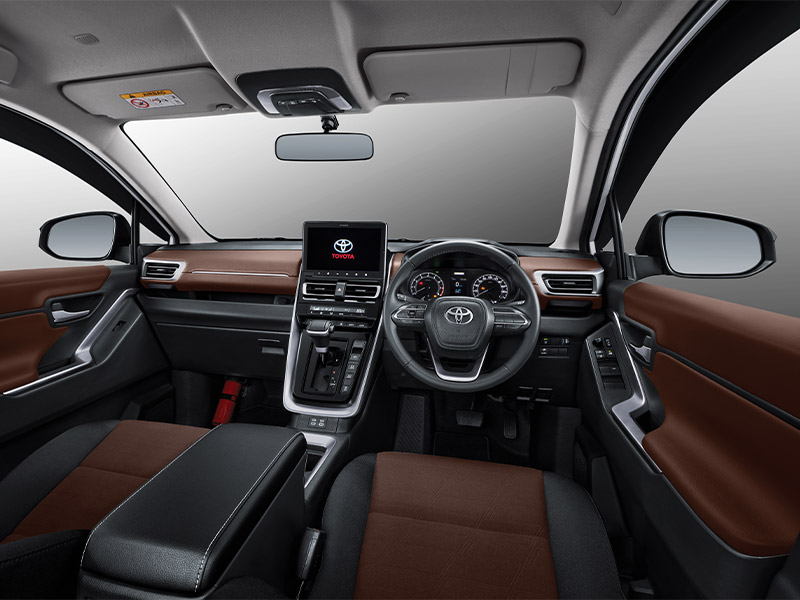 Variants on the pricier side will get a dual-tone interior featuring leather seats finished in Dark brown (mocha) and all-black theme. For seating layout, the Innova Hycross comes with 7- and 8-seat configurations depending on the variant. Additionally, top variants will also get as many as four USB C-ports across the cabin and dedicated climate control for second row passengers. It also gets an auto hold function, electronic parking brake and drive modes. Top variants in Indonesia also get dual 10-inch screens for second row passengers which would be a welcome feature in India.

The Innova Hycross comes with a strong hybrid option similar to what we saw in the Hyryder and the Suzuki Grand Vitara. This hybrid known as THS (Toyota Hybrid System) internally, is a heavily localised version created specifically to cater to the price-sensitive Indian market. This hybrid churns out 152hp and 187Nm of torque coupled to an electric motor for a combined power output of 186hp. It also comes with a beefier 2.0-litre engine instead of the smaller units seen on the midsize SUVs.  This more powerful engine is a 2.0-litre naturally aspirated petrol engine from Toyota’s Dynamic Force engine family which puts out 174hp and 197Nm, and comes mated to a CVT gearbox. This is the same family of engines that is offered on many Toyota and Lexus models globally. As for diesel powertrains, there aren’t any since, a hybrid powertrain will do the duty for the fuel efficient engine.