The facelift version of the Tucson had been showcased by Hyundai during the Indian Auto Expo in February, and I for one was very much waiting for it to be released. Unfortunately, the Coronavirus pandemic hit India after the month of February, and to protect the citizens, the Government implemented a lockdown which resulted in the industries being temporarily closed, which not only affected sales but derailed the launch of many products.

Tarun Garg, business head of Hyundai Motor India Ltd had an interaction with Autocar via Instagram, and during this interaction, Tarun revealed that the 2020 Tucson was the next product being launched by Hyundai, and that it would be released within the country, once the lockdown has been called off. (which could take quite some time in some states, which have seen a rapid surge in cases)The facelifted Tucson has been updated in terms of exteriors, the interior quality has been improved and the powertrain has also been upgraded. Let us dive in and find out in more detail what these changes are.

The exteriors of the facelifted BS6 Tucson

The changes on the outside of the 2020 Tucson are subtle but observable, the front grill has been redesigned, the headlamps around the grill now sport ‘L’ shaped DRLs (daytime running lights), and the rear taillight designing has also received LED enhancements. The front and rear bumpers have also been tweaked.

The interiors of the facelifted BS6 Tucson

Being a Hyundai, the 2020 Tucson has now been equipped with Hyundai’s Blue Link technology, which allows the owner of the vehicle to remotely switch the vehicle on/off via the smartphone and it also provides crucial information about the car on the owner’s smartphone. 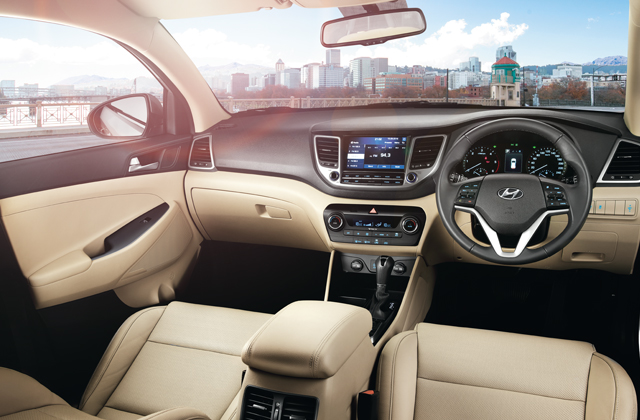 Furthermore, a new 8.0 inch infotainment system has been added along with a provision for wireless charging, panoramic sunroof, electric seat adjustment for the front passenger and revised A/C vents as well. 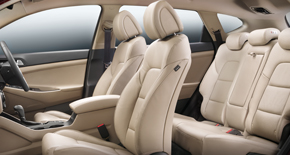 Although, I personally feel that the interiors are a bit too dull when compared to the exteriors. Yeah the beige lightens things up but the design is just, non existent.Even though it is just a facelift, a more intuitive interior rather than no creativity is bad advertisement. In fact, with offerings from Jeep and VW or the much cheaper Tata Harrier, Seltos and Creta trio, things do not look too pretty for this new Tucson. The older Tucson was a nightmare for Hyundai in terms of sales and they will need to give it a very aggressive price tag to work.

The powertrain of the facelifted BS6 Tucson

The BS6 Tucson will be launched in both BS6 compliant petrol and diesel variants, and it is good to see that in a time where automakers are refusing to offer BS6 diesel vehicles, Hyundai has decided to continue offering it. Now this is where the Tucson might attract customers.The petrol 2.0 litre engine produces 150 ps and 192 nm of torque, and this engine is mated to a 6 speed automatic gearbox as standard. The 2.0 litre turbo-diesel engine makes a generous 182 ps and 400 nm of torque, and this engine is coupled with a new 8 speed automatic gearbox. If you are interested in buying an All Wheel Drive Tucson, that is possible, but you would have to buy the top end GLS (diesel) variant in order to get the 4×4 feature.

The Tucson much like before will continue to compete with vehicles like the Jeep Compass, Honda CR-V, the very new Skoda Karoq and VW T-Roc. Some may say that even the Harrier threatens the Tucson because of the sheer presence and size. But, the Harrier trumps the Tucson and all other SUVs in terms of pricing which has been a primary reason for the failure of this segment of SUVs.The Creta/Seltos, Hector and Harrier are a trio of SUVs offering almost similar features and feel at a much lesser price.

The only downside is they all aren’t 4×4 but let’s face it, most of these big SUVs aren’t either. And even when they are, does the 4×4 even sell?Again, what will matter the most is the pricing that Hyundai decides to launch it at, and considering the fact that the 2020 Tucson has received a few premium features, we could expect the price to rise.The launch of the facelifted BS6 Tucson will take place once the nationwide lockdown is relaxed, which could either be soon or after quite some time.

Drool alert! The 7th gen 2021 BMW 5-series debuts as the sexiest sedan EVER