After several leaks and spy shots, the covers have finally been lifted off the 2021 Ford F-150, and the full size pickup vehicle has truly evolved. For the last 43 years, the F-150 has been the segment leader in sales, with a revolutionary update like this, it will surely hold on to this laurel for many more years. The last update on the Ford F-150 was administered 6 years back which gave rise to the 13th generation pick up vehicle.

Now we have the 14th gen model F-150, and before we talk about the vehicle, can I just talk about the launch event? Actor Dennis Leary was the emcee during the launch of the 2021 F-150, and what made this even more fun was the heavy electronic guitar riffs which were being played in the background. Okay, let’s get down to business and talk about the changes on the new F-150.

The F-150 may look similar in comparison to its predecessor, but believe me when I say, every panel of the vehicle is a new one. Starting with the front fascia, the headlamps have been redesigned and have received an all LED treatment, the grille is available in 11 different options, the front fenders have been moved higher and the dome has also been tweaked.

Talking about the grille, Ford has incorporated the vehicle with many new technological tweaks, one being, the grille utilises ‘active grille shutters’ which close at a certain speed. Furthermore, the grille also deploys an ‘air dam’ which lowers at a speed of 40 mph, thereby improving the aerodynamics of the car. The mid-section has been shortened, as for the rear, the C shaped taillights are now all LED and the tailgate is offered in different design options.

The tailgate isn’t much like our regular boots, Ford has provided a great many basic yet convenient features here such as, a flat work surface which houses a tablet holder, ruler, pencil holders and tie down rings which also function as bottle holders.

It is often assumed that pick up vehicles would have regular interiors but times have changed and the interiors and the features laden in this part of the vehicle can compete with those of many top end sedans. The base XL trim is equipped with an 8 inch infotainment system and as you move up to the XLT and higher variants, a 12 inch infotainment system is added which supports music, navigation, and truck features. The touchscreen unit makes use of Ford’s SYNC 4 system which supports Android Auto, Apple CarPlay, Waze and Alexa.

Audio is provided via an 18 speaker Bang & Olufsen system. The SYNC 4 system will be offered as standard on all variants of the pick-up. In a first for a pick-up vehicle, the F-150 will receive Over The OTA updates which will continue to add new features to the infotainment system. Furthermore, an optional 12 inch instrument cluster is also available. Talking more about technology, the vehicle also uses 4G network and can provide WI-FI network to 10 devices. If you are amazed by this, continue reading because I am about to talk about the seats and centre console. 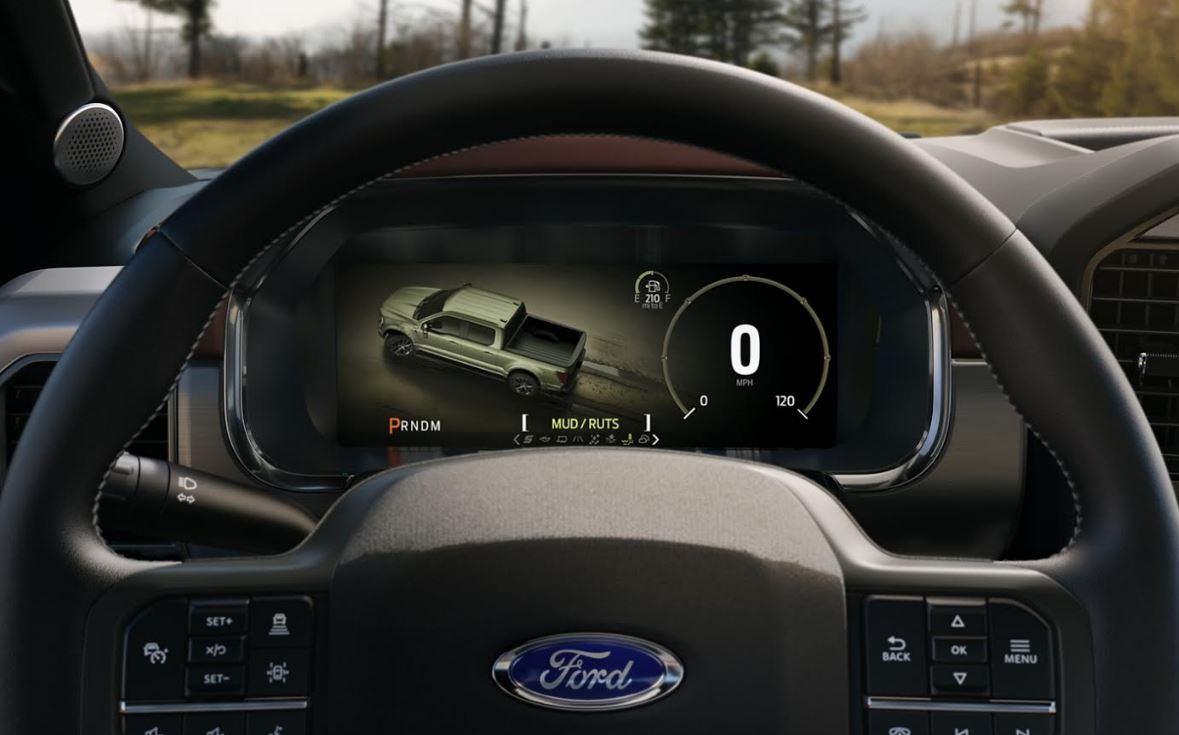 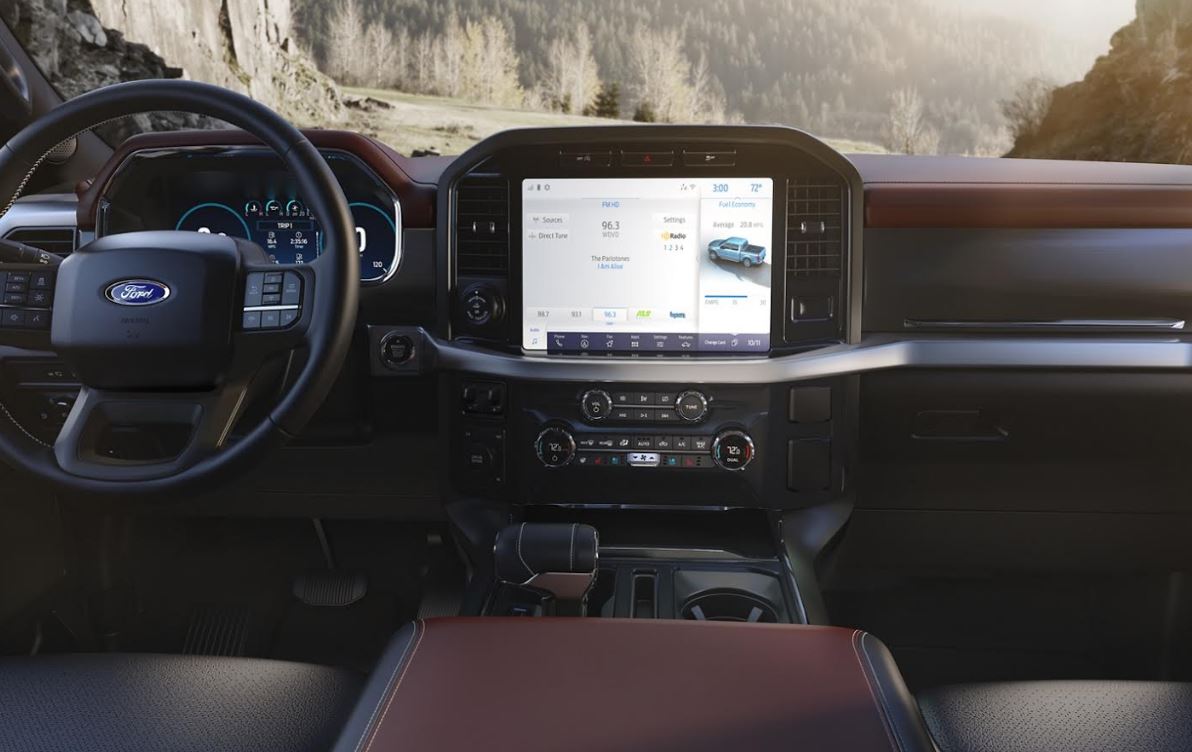 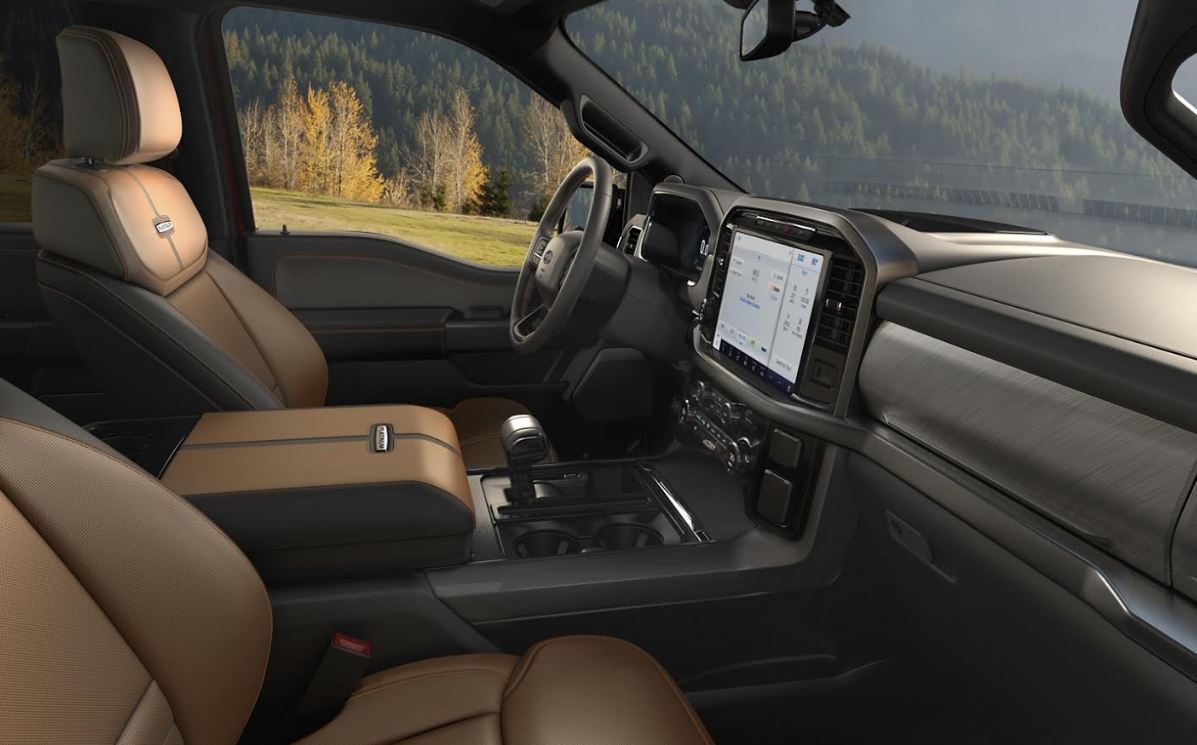 For the ones who chose to purchase a variant between XL to Limited trims, they will be provided with a bench and captain seat configuration and most importantly, they will get the ‘work surface’. What is the work surface, well, Ford says it is “ideal for signing documents, working on a 15-inch laptop or enjoying a meal when parked”. In a very cool and futuristic way, the gear-lever folds downwards, and over it comes the flat work surface. In higher variants like the King Ranch, Platinum, and Limited trims, the sleeper seats have been equipped with Max Recline which can allow the user to bend the seats to almost 180 degrees. Other features also included wireless charging and a massive panoramic sunroof.

Substantial updates have been made under the hood of the new generation F-150, an all new PowerBoost hybrid 3.5 litre V6 has been employed and is available in every variant. As it is a hybrid, the electric motor adds 41-hp, a 10 speed transmission has been used to send power to the wheels.

Furthermore, regenerative braking helps in recharging the 1.5-kilowatt-hour lithium-ion battery. Other engine options include a 5.0 litre V8, 3.5 litre EcoBoost V6, 3.3 litre V6, 3.0 litre V6 diesel and a 2.7 litre EcoBoost V6. As for the figures delivered by these engines, information hasn’t been put out by Ford but the American automaker does claim that it would be “the most torque and horsepower of any light-duty full-size pickup.”

Several safety features are offered on the new Ford F-150, namely advanced driver-assistance features like pre-collision assist with automatic emergency braking and pedestrian detection, rearview camera, auto high beam headlamps and automatic headlamps. More driver assist features will be added, and will continue to be added via OTA updates. A monitoring system which makes use of an infrared vision, Intersection Assist, Active Park Assist 2.0, Trailer Reverse Guidance and Pro Trailer Backup Assist are also used by the pick up vehicle.

The 2021 Ford F-150 will be on sale from fall this year, and once it does, it will be taking on the Ram 1500, Chevrolet Silverado and eventually it will also take on the Tesla Cybertruck and Rivian R1T. These behemoth sized pick up vehicles are all brilliant in their own ways, but the F-150 has received some game changing updates which in my opinion makes it a formidable player in its segment.

Hyundai has sold more than 97,000 units of the Venue in India, within a year of its launch 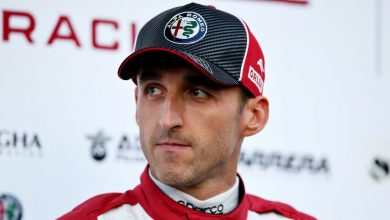