Volkswagen pulled the wraps off their production-spec made-in-India SUV, the 2021 Taigun, two weeks back. It’s the second model to be based on the VW Group’s MQB-A0-IN platform, after Kushaq and will only come with turbo-petrol engines. The German C-SUV will be launched by August 2021 and will also come with a GT Line trim with sportier cosmetic enhancements to lure enthusiasts. While the last reveal was majorly exterior based, VW has now given us an inside view with full details.

As we speculated, Taigun’s interior looks a lot like its concept that was showcased during the 2020 Auto Expo. The SUV gets a premium and practical interior space that comes with an elevated seating position for superior visibility creating a feeling of safety and confidence in the occupants. Even though the Taigun is a compact size SUV, its wheelbase of 2651mm makes makes interiors extremely roomy and spacious. The German automaker also claims that the flattened tunnel at the rear bench of the CUV makes the seating position comfortable for the middle seat occupant. 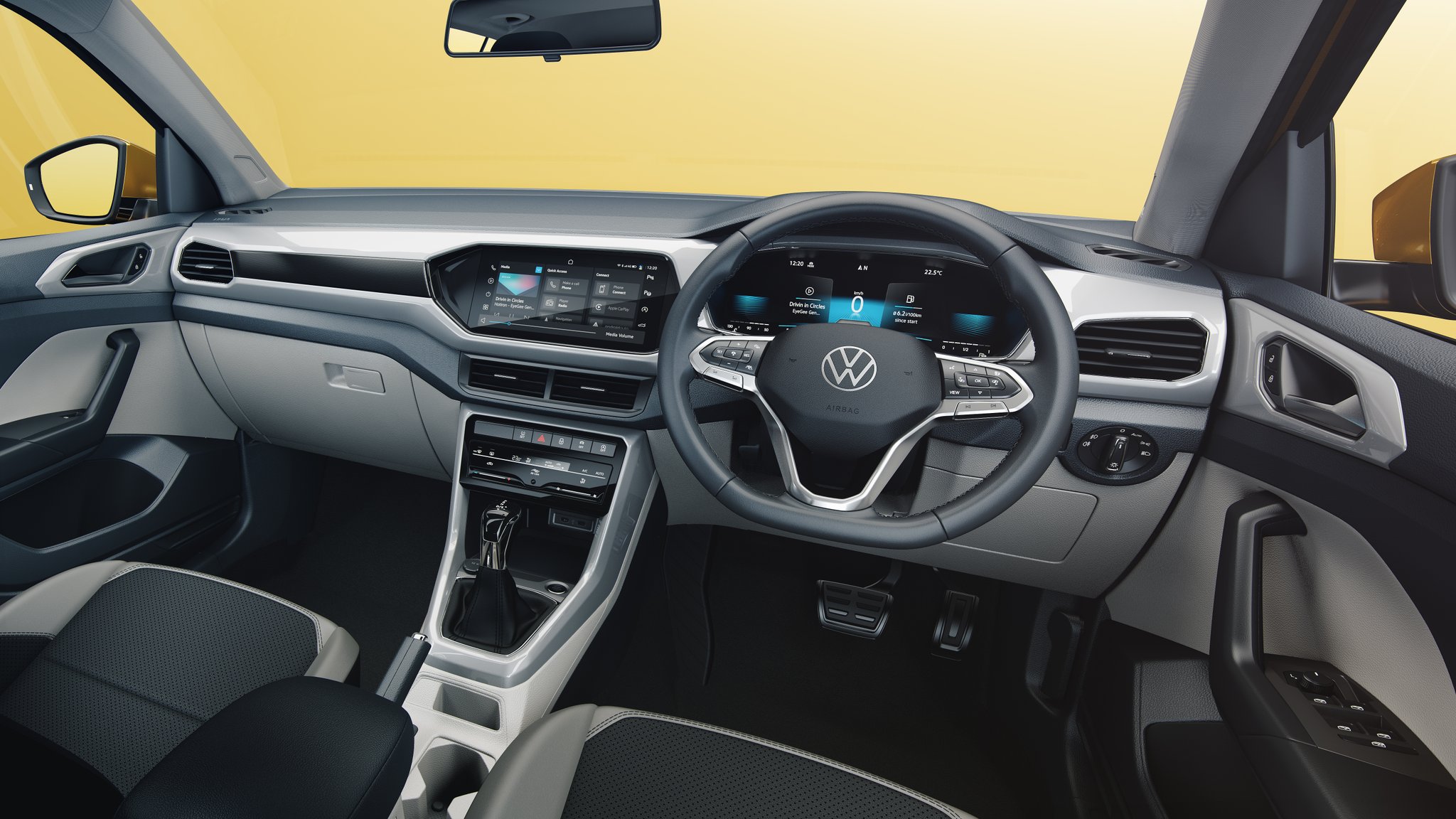 Graced with modern features and styling the Taigun comes with a plush décored dashboard layout. The German design also includes smart storage spaces for the young and active consumer. To enhance the overall feel of the cabin, VW has equipped the Taigun with ambient lighting and ventilated leather front seats.

Talking about the infotainment system, Taigun shares the same unit with its BFAM Kushaq, which means it gets a 10 inch (25.4 cm) touchscreen display embedded with connected features like Apple Carplay and Android Auto. There are Type C and USB charging ports inside the cabin to ensure on the go charging for smartphones.

The steering wheel is wrapped in sports leather and has multiple buttons for various controls which will make sure the driver doesn’t take his hands off the wheels. Talking about the driver’s ease and features the german offering ticks all the basics one can expect in this segment. Flaunting a digital cockpit Taigun comes with touch-based AC controls, ventilated seats and rain-sensing wipers. Additionally, it comes with an electric sunroof. 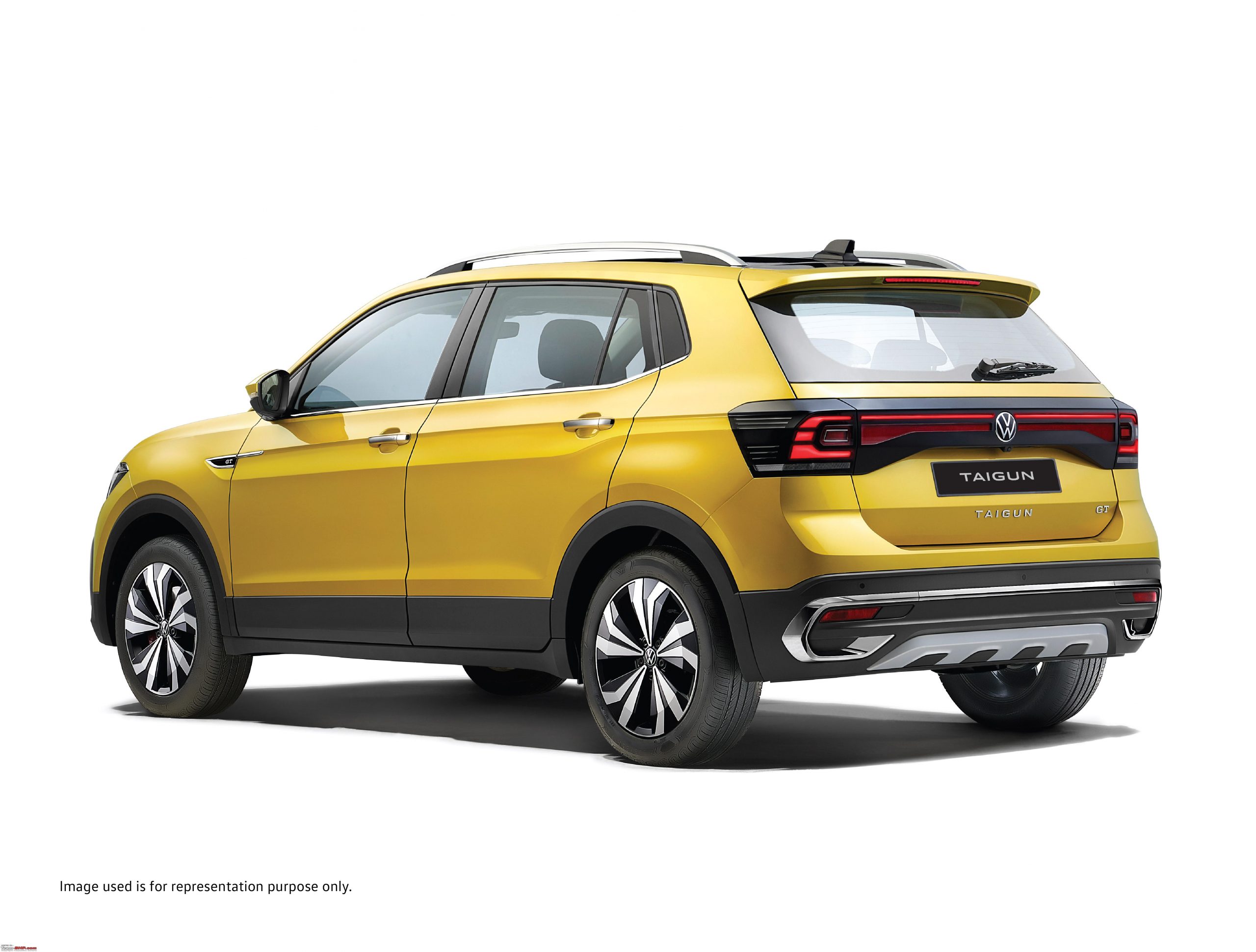 The powertrain details for Taigun has already been shared by VW during its reveal. It will get the same pair of 115 hp 1.0 TSI and 150hp 1.5 TSI engines along with the gearboxes as the Kushaq. The 1.0-litre motor will be mated to a six-speed manual and six-speed torque converter, while the 1.5-litre will more likely be provided in the GT variant with a 7-speed DSG.

The torque figures will stand around at 175 Nm for the non-GT variant and 250 Nm for the GT. Ensuring the standard robust German quality the Taigun will come with 6 airbags, 3-point seatbelts for all passengers, tyre pressure deflation warning, ESC & Hill Hold Assist (standard across all variants).

Volkswagen will launch the Taigun in August 2021 with an expected price figure between Rs. 10-17 lakh and it will go up against the hot selling Hyundai cousins Creta and Seltos.

The Mustang is the world's best-selling sports car and coupe for six years on-the-trot!

Upcoming Ferrari 812 Versione Speciale might be baptized as the 812 Imola.