Finally, after a long wait, Hyundai has revealed official images of its upcoming pick-up vehicle, the Santa Cruz. First showcased as a concept long back in January 2015, the Santa Cruz is the first offering by Hyundai in the pick-up segment. It will go on sale in the US markets later this year.

Once launched it would be competing against the likes of Toyota Tacoma, Honda Ridgeline, Ford F-150, Jeep Gladiator and Chevy Colorado. However, Hyundai claims that the Santa Cruz “shatters both SUV and truck segments, creating an entirely new vehicle category”. 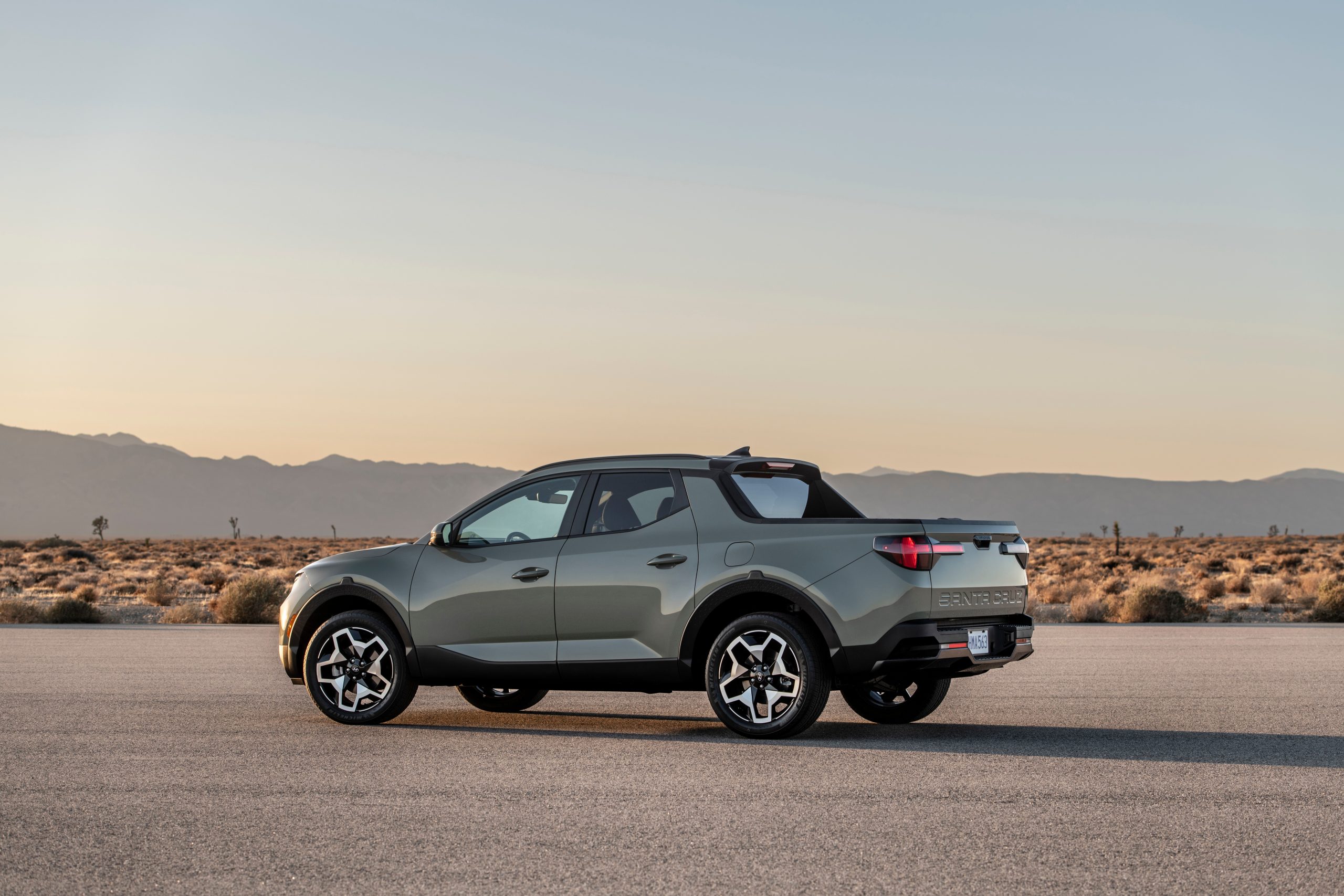 It won’t be wrong to call Hyundai Santa Cruz the pick-up version of its sibling, Tucson. The pick-up shares many of its chassis components with the Tucson but it has an extra wheelbase of 249mm (3004 mm in total). It is also 315mm longer than the Tucson, and is 66mm wider and 28mm taller. Overall dimensions you ask? Well, the Santa Cruz measures 4971 mm long, 1905 mm wide, and 1694 mm tall.

Comparing its size to the other compact/midsize pickup competition, the Santa Cruz is quite a bit smaller. It’s shorter and narrower than the Toyota Tacoma, Honda Ridgeline, and Nissan Frontier, with a relatively short wheelbase. However, the smaller dimensions will come in handy for those looking for a pickup that can fit in tight spaces. 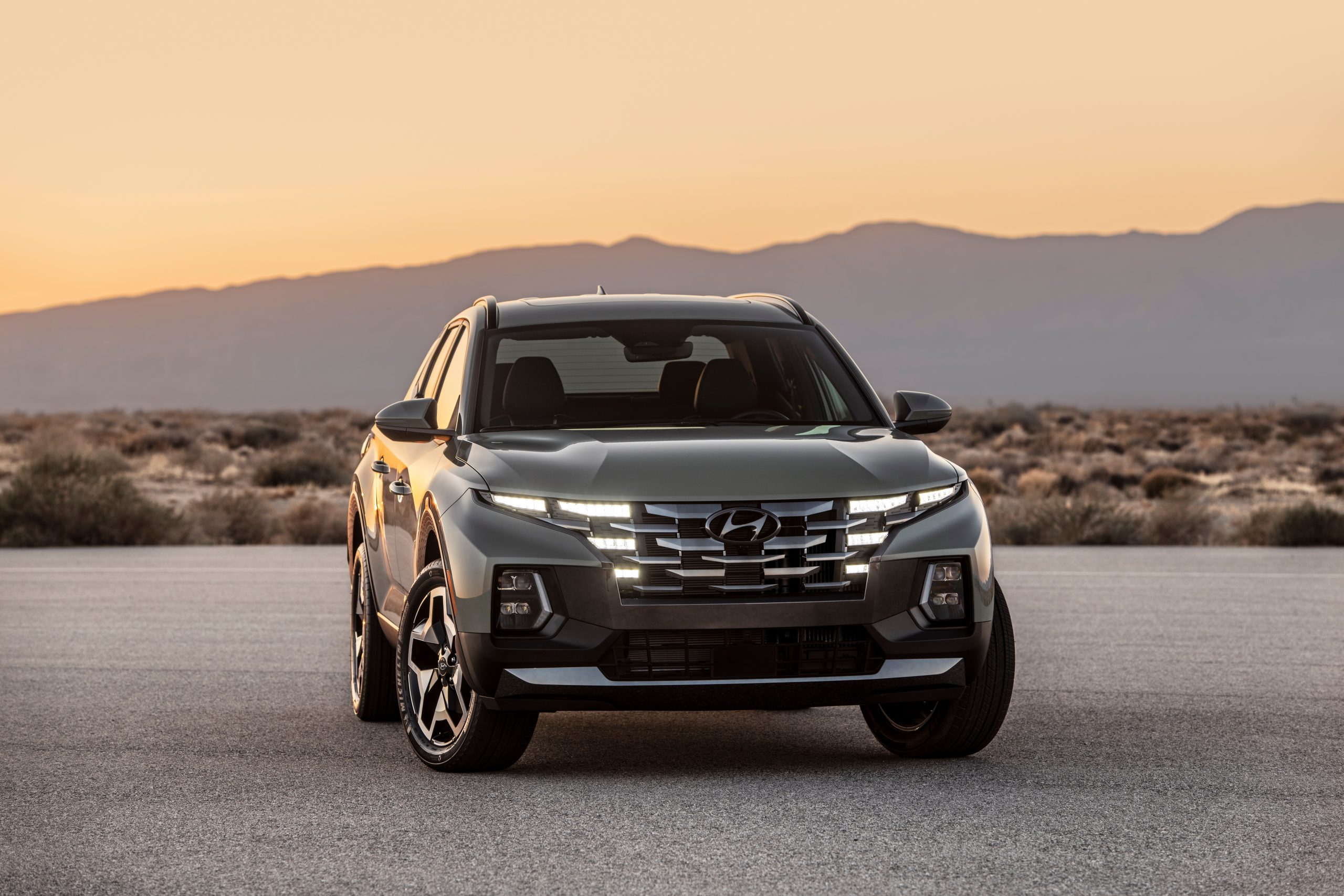 But don’t let its smaller dimensions fool you, the car looks intimidatingly aggressive in flesh, to say the least. With its large grille flanked by signature integrated DRLs, the front profile is bold and rugged. It has a sharp-looking bumper encasing the headlights, while along the sides, it has truncated rear doors and a short roof. The whole frame sits over either the high-profile 18-inches or the all-season 20-inches tyres. 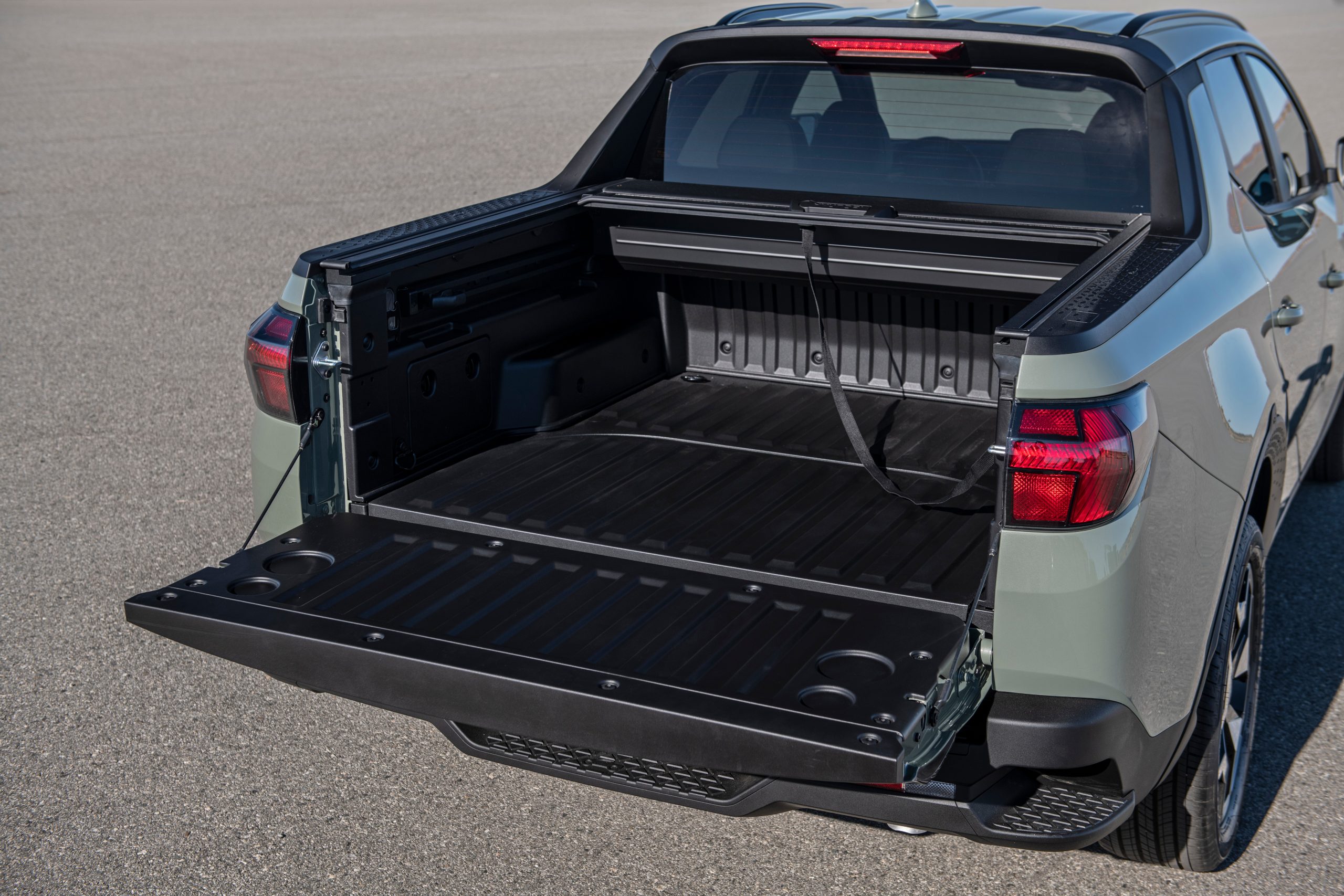 Coming to the back, the 2022 Hyundai Santa Cruz carries over the triangular design themes from the front and comes with the T-shaped tail lamps. The rear also sports a 1,323mm long load bay area with a lockable tonneau cover, and a rugged bumper that houses the number plate and steps.

The Santa Cruz’s resemblance with Tuscon is reflected even on the inside of the cabin. The interior is a straight lift from its sibling and has the same wrap-around, floating look. There’s a 10-inch wide-screen fully digital centre screen. The centre console is a free-standing element with slim vents and a panel of buttons below the screen. The instrument cluster is also a 10-inch digital unit. 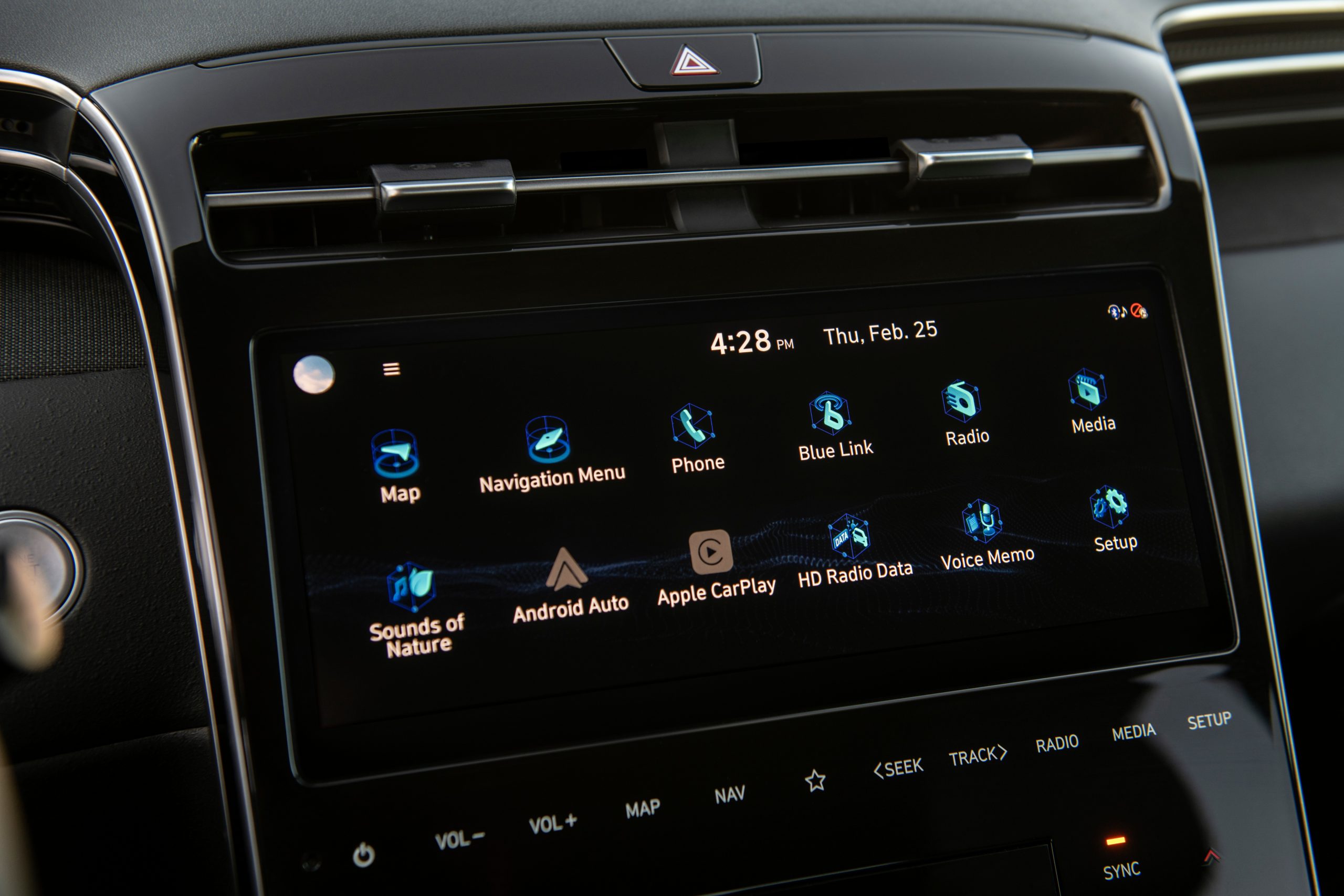 While the four-spoke steering wheel resembles the Tuscon, the button-operated gear selector has been replaced with a traditional lever on the Santa Cruz. Another new additions include under-seat storage for the rear seats, an eight-speaker Bose audio system, a full suite of advanced driver assistance systems and Hyundai’s Blue Link suite of connected-car features. 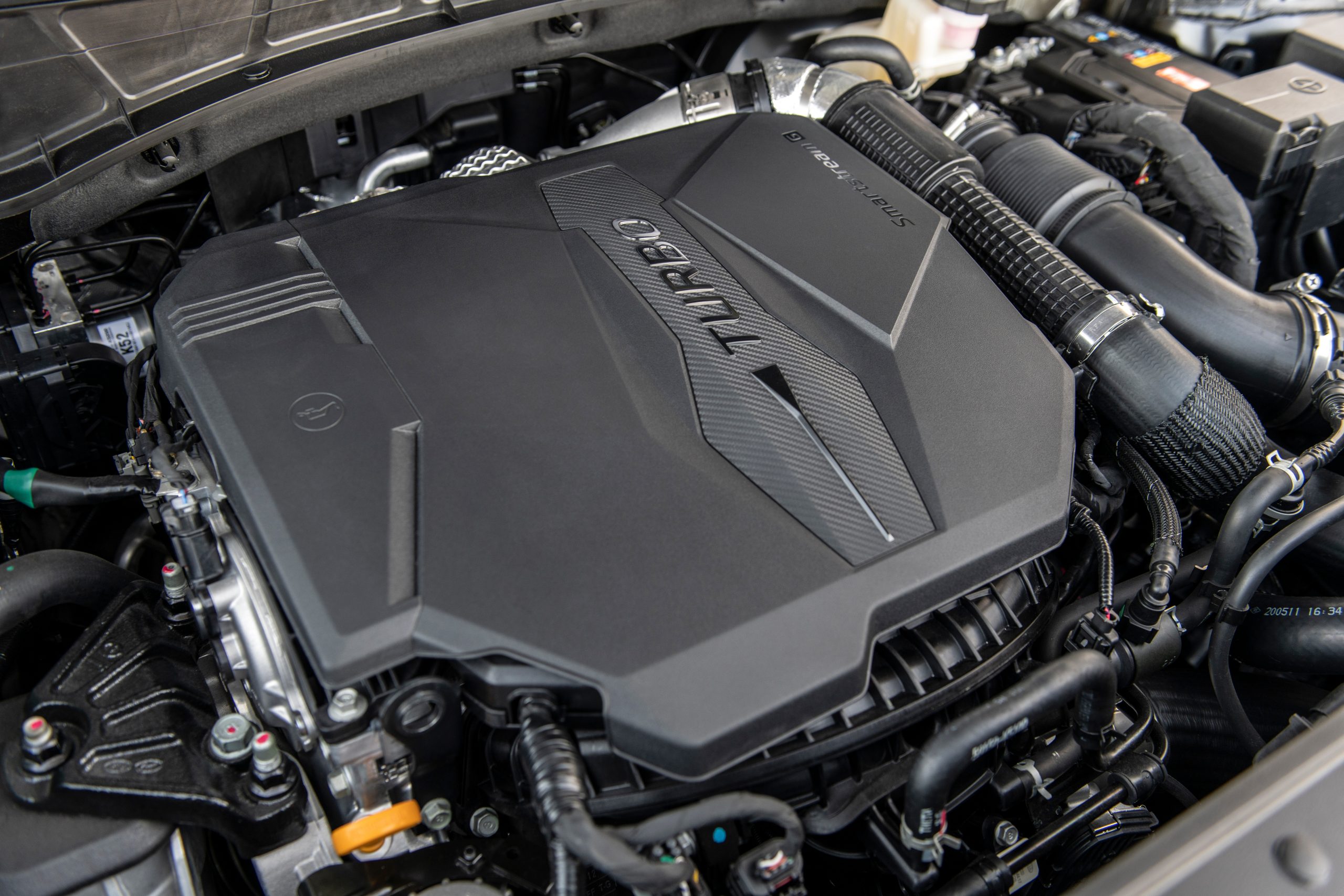 Talking about the powertrain, the base engine option in the Santa Cruz is the same unit as in the Tucson, a 2.5-litre naturally aspirated petrol expected to make 190PS and 245 Nm. It is paired with an eight-speed torque converter transmission. However, the 1.6-litre turbo in the Tucson is replaced by a 2.5-litre four-cylinder turbo-petrol that should put out 275PS with 420 Nm of torque and is mated with an eight-speed DCT. Like the Tucson, the Santa Cruz is front-wheel drive (FWD) but gets Hyundai’s H-Trac all-wheel drive (AWD) system as standard, which sends torque to the rear axle via a clutch pack in situations where more rear traction is needed.

The Hyundai Santa Cruz goes on sale in the US in late 2021 but it is unlikely that we see the Santa Cruz being launched in India as unlike the US, India doesn’t have a pickup culture.

New-Gen Honda Civic Revealed in its prod-spec! Debuts On April 28.