Honda has taken the wraps off an all-new 7-seater SUV concept in Indonesia, dubbed as the N7X. The new three-row concept from Honda was unveiled digitally via Hondaisme’s Youtube channel on May 3 from Dreams Café, Jakarta. The N7X nomenclature is based on “New 7 Seater eXcitement” and is expected to replace the BR-V once in production form.

PT Honda Prospect Motor claimed during the reveal event that the N7X concept car was designed and developed by Honda R&D Asia Pacific Co., Ltd., based on extensive studies from consumers in various countries, including Indonesia. The Japanese automaker further informed it packs in the functionality of a Multi Purpose Vehicle (MPV) as well as a Sport Utility Vehicle (SUV) to provide the premium comfort and spaciousness typical of an MPV with the toughness and style of an SUV. 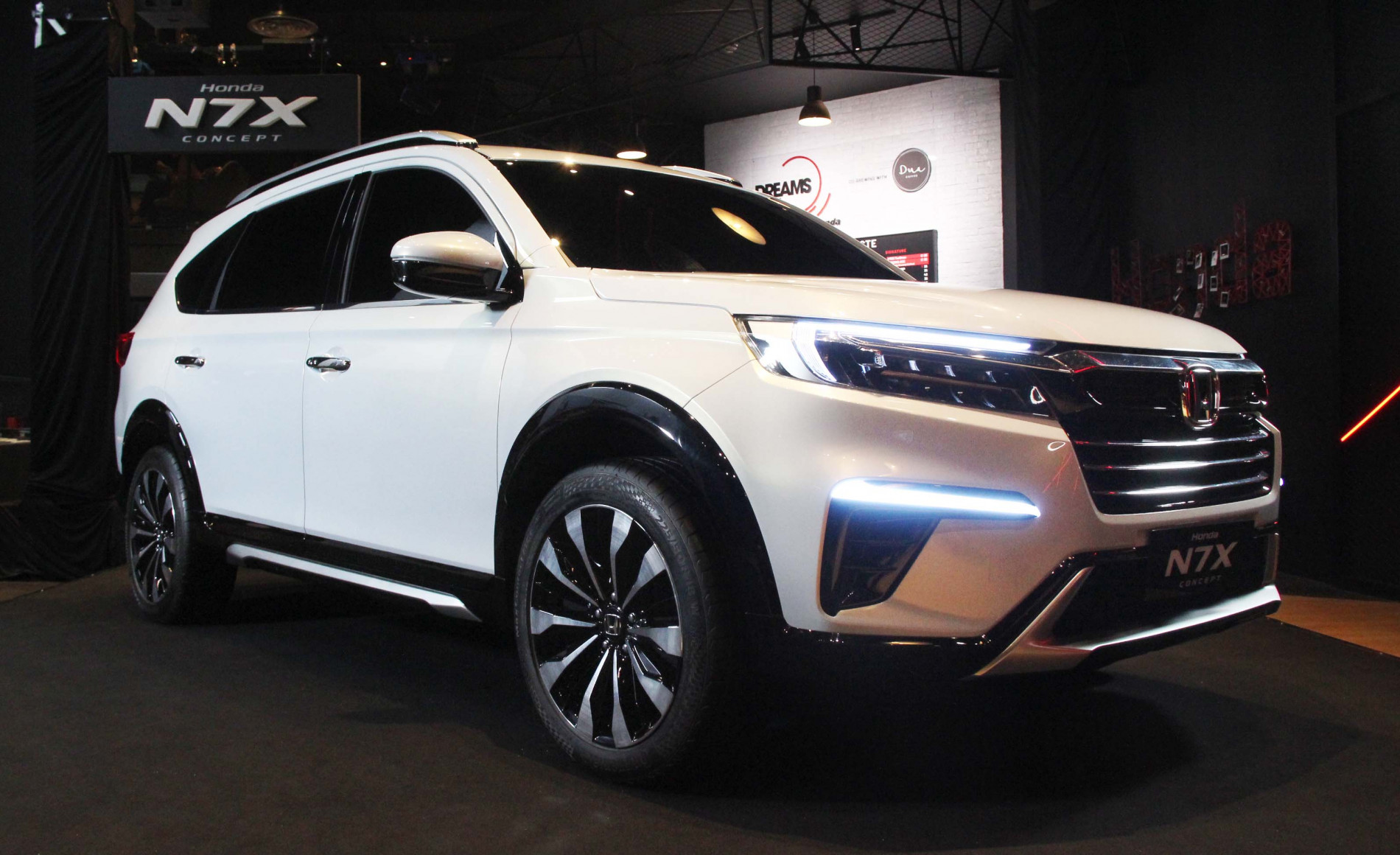 From the outside, the N7X Concept features a robust muscular body with sharp lines that gives it a sleek look. The hood looks sturdy with a multi-slat chrome-laden nose grille that is flanked by slim wraparound LED headlamps. The lamps get complimented by a slim and unique looking dual-LED DRL setup. One is placed at the edge of the bonnet border lining the top of the headlamp and curving out on the outer edge, while the other is positioned on the bumper just above the fog light. On the front bottom, there’s a tough-looking chin with a faux skid plate and brushed aluminium inserts that enhance the N7X’s tough SUV look.

Coming to the sides, it gets a large glasshouse that tapers at the back and a shoulder line that goes slightly upward. There is a very prominent character line that runs across its side, starting from the headlamp and nearly merging with the horizontally placed wraparound tail lamps. Talking about the rear lamps it gets the signature LED elements similar to its sedan sibling, the Honda City. The whole frame sits on the large tires that complete its strong yet elegant appearance. The tires are wrapped around in black wheel arches that run across throughout the vehicle’s bottom edge. Overall, the look of the N7X concept is very similar to other larger three-row Honda offerings like the CR-V. 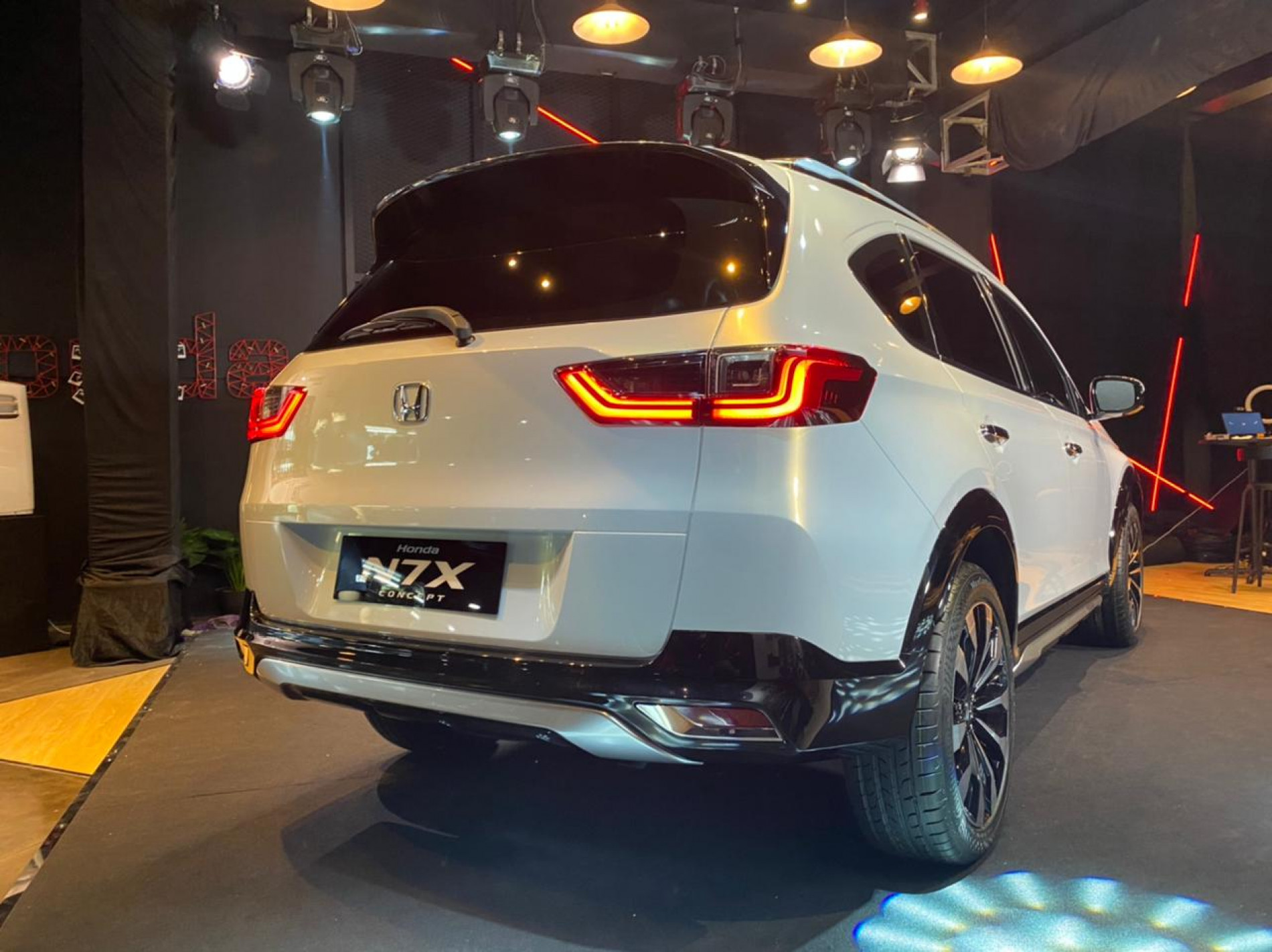 The Japanese automaker has not revealed any details about the powertrain, but the N7X concept shares its underpinnings with the latest-gen Honda City, so it’s safe to assume that it will share the powertrain options as its sibling. This means the production variant of the SUV may come with a 1.5-litre petrol engine mated to either a manual or a CVT automatic gearbox.

Honda will be exhibiting the N7X concept car for the general public first-hand experience at its Dreams Café located on the Ground Floor of Mall Senayan Park, Jakarta, from May 5 to June 6, 2021.

“The N7X is our concept of what a 7-seater car should be, which not only offers pleasant driving performance but also the serenity and comfort of a premium car for all occupants. We are very proud to make Indonesia the first in the world to introduce the N7X Concept, a concept that will redefine the categories of cars and driving pleasure.” expressed Takehiro Watanabe, President Director of PT Honda Prospect Motor at the launch event.

While the Japanese carmaker asserted that the N7X is exclusively developed as per the needs of its Indonesian customers, but we are expecting an India launch at a later stage as well. Our feeling is also strong because the Honda Small RS Concept (which was baptised as Brio in the production model) and the BR-V Prototype were also first revealed at the past Indonesia International Motor Shows and later made it to the Indian shores as they cater for the similar set of demand of the car buyers here as well.

With the Honda BR-V’s phasing out in the country, the N7X when introduced in the Indian market will fill in the gap created in the company’s Indian lineup. However, it won’t be a cakewalk for the Japanese SUV in the Indian 7-seater segment as it will have to compete against the likes of the new Tata Safari, Hyundai Alcazar, MG Hector Plus and some soon to be launched German offerings.