Kia has officially revealed the official set of images for its fifth-gen Sportage, an SUV that has been carefully crafted to inspire customers with its interior and exterior design. The exterior of the SUV moves its identity to the next generation while paying homage to its rich heritage. You get crisp lines along the refined body, as clean but muscular surfaces join hands to give the Sportage a dynamic road presence.

“Reinventing the Sportage gave our talented design teams a tremendous opportunity to do something new; to take inspiration from the recent brand relaunch and introduction of EV6 to inspire customers through modern and innovative SUV design. With the all-new Sportage, we didn’t simply want to take one step forward but instead move on to a different level in the SUV class,” commented Karim Habib, Senior VP & Head, Global Design Center.

The Opposites United design philosophy, on which the Sportage is based, is formed of five pillars: Joy for Reason, Power to Progress, Technology for Life, Tension for Serenity, and Bold for Nature. The last pillar – Bold for Nature, has greatly influenced the design creation of the all-new Sportage, embodying the natural world and creating a design identity that takes a daring, emotional, modern but organic form. 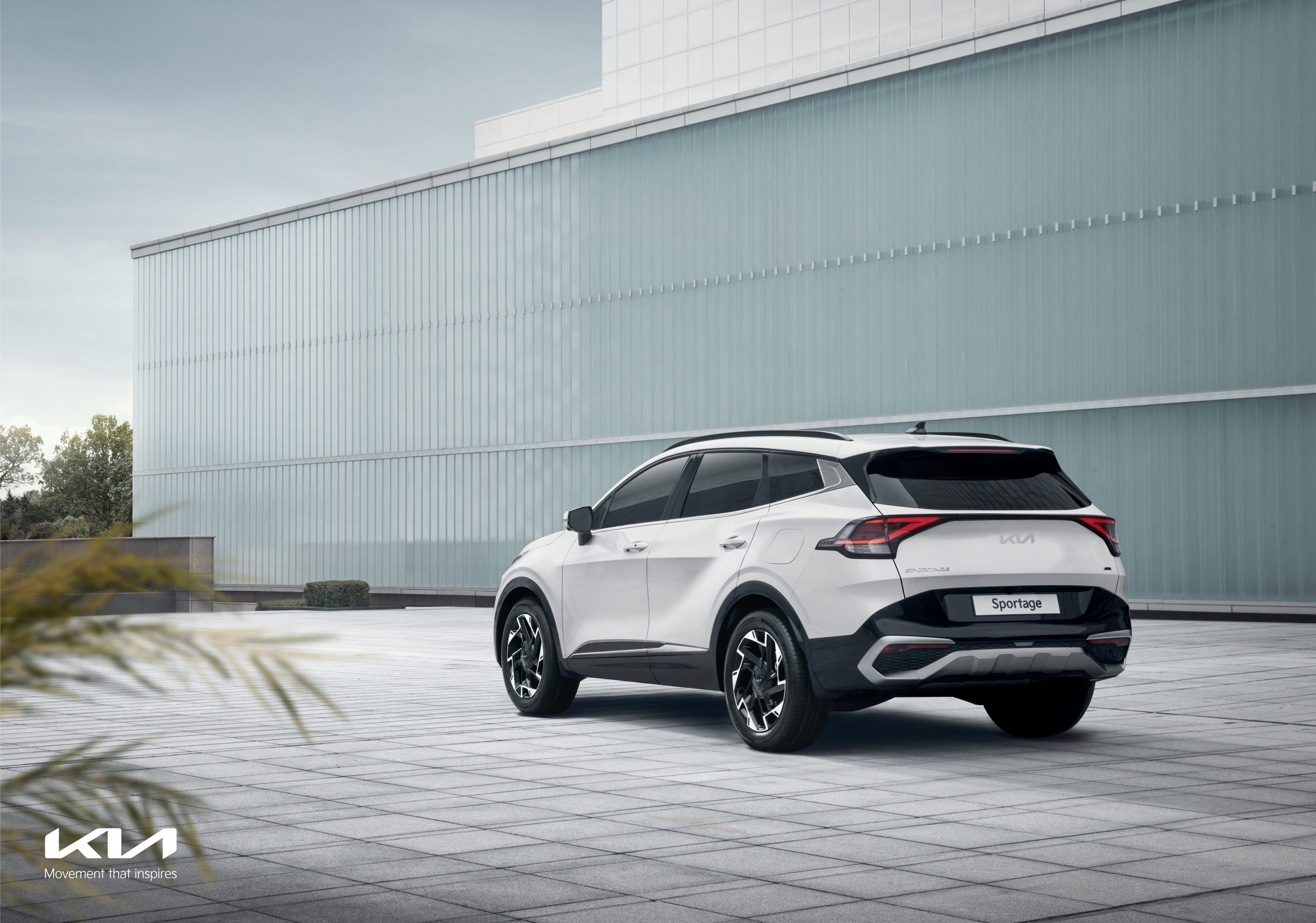 Kia says the new Sportage is a result of a collaboration between Kia’s main global design network in Korea, Germany, the US, and China. At the front, you have a detailed-orientated black grille graphic stretching across the width of the face. The extended grille, coupled with Kia’s signature Tiger Nose grille, creates solid boundary lines for the headlights which are futuristic-styled boomerang-shaped DRLs and look strikingly good.

The side profile of the Sportage stays true to its SUV DNA, with stretched lines cutting across the refined body surfaces. You can also have a go at the black roof, a first for the Sportage, helping to accentuate the sporting profile and highlight the architecturally dynamic C-pillar that encompasses a deconstructed look.

At the rear, the Sportage maintains a strong road presence and mirrors the EV6 heavily. Completing the design, a large lower graphic bumper casing at the rear uses the same philosophy as the frontal technical black grille, connecting the all-new Sportage’s rear design elements and resulting in lightness in both appearance and touch. 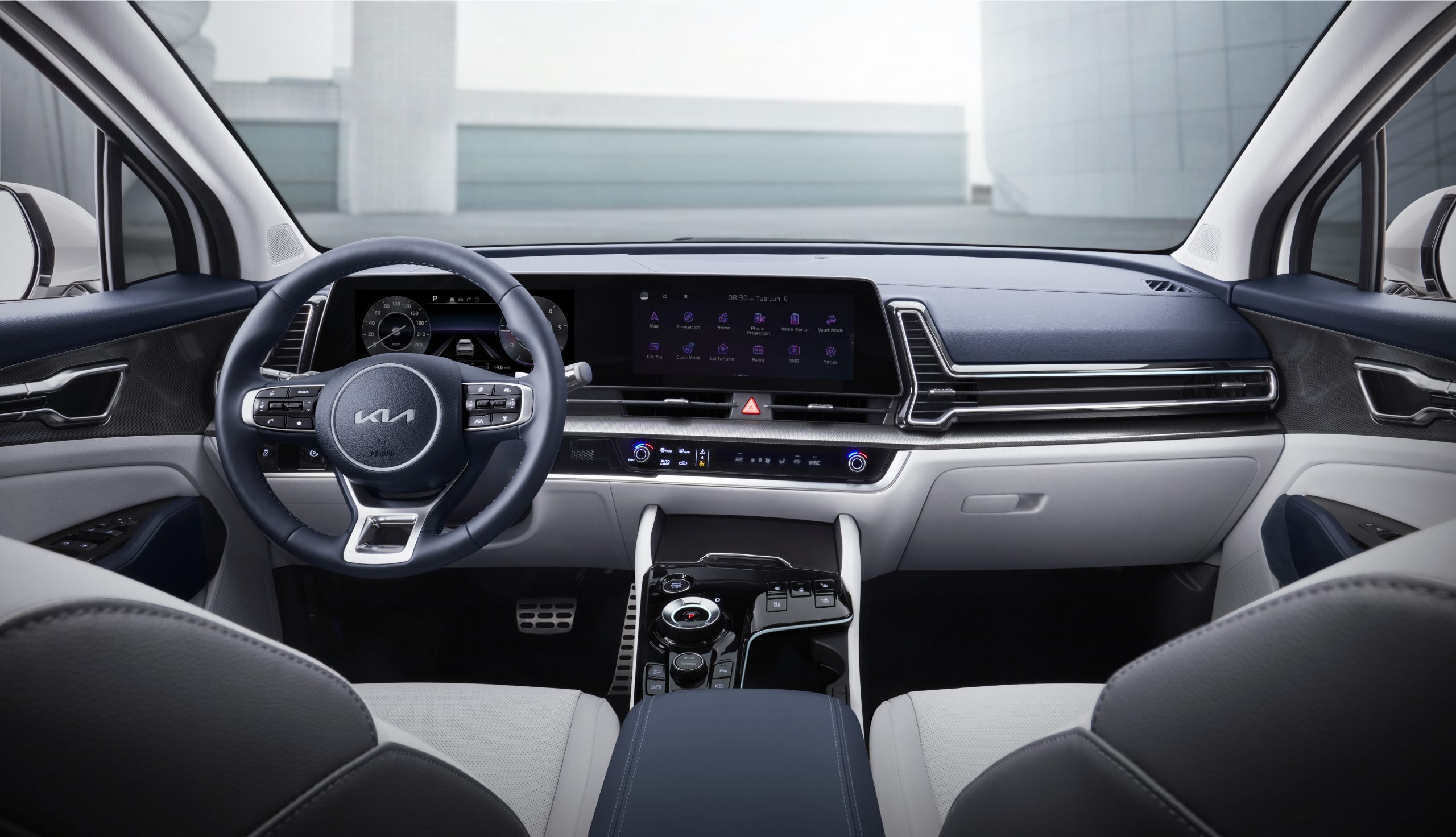 Talking about the cabin, the inside is a driver-orientated space that is truly state-of-the-art… at least by the looks of it! And need I say the best looking cabin in the segment yet. For starters, a large, integrated curved display with a slim crush touchscreen pad and finely detailed air vents form the majority of the interior. The touchpad, along with the advanced integrated controller, acts as the centre for driver and passenger connectivity. Of course we know how well made Kia interiors are so quality of materials used will probably be soft to touch.

Another first for the all-new Sportage is the X-Line trim that features a unique bumper, side sill, and curved roof rack, while on the inside, buyers can opt for either a signature sage green or black seating as well as bold quilting and black metal wood.

No information on the powertrain has been released yet, but as we reported earlier, the engines could be borrowed from the Hyundai Tucson. A global market launch is slated to happen later in the year so stay tuned for more information.

And now it's Fiat that commits to an EV-only future