Lamborghini has finally added the open-top RWD version of the Huracan EVO to its India lineup. The Lamborghini Huracan EVO RWD Spyder made its global debut last year and is based on the RWD Coupe. Both models are identical in terms of specifications (apart from the weight of course) and the newly launched Huracan variant also gets new internal engine components, electronic aids and more. The country’s first Huracan EVO RWD Spyder arrived in the lovely shade of Blu Sideris at a price of ₹3.54 crore. 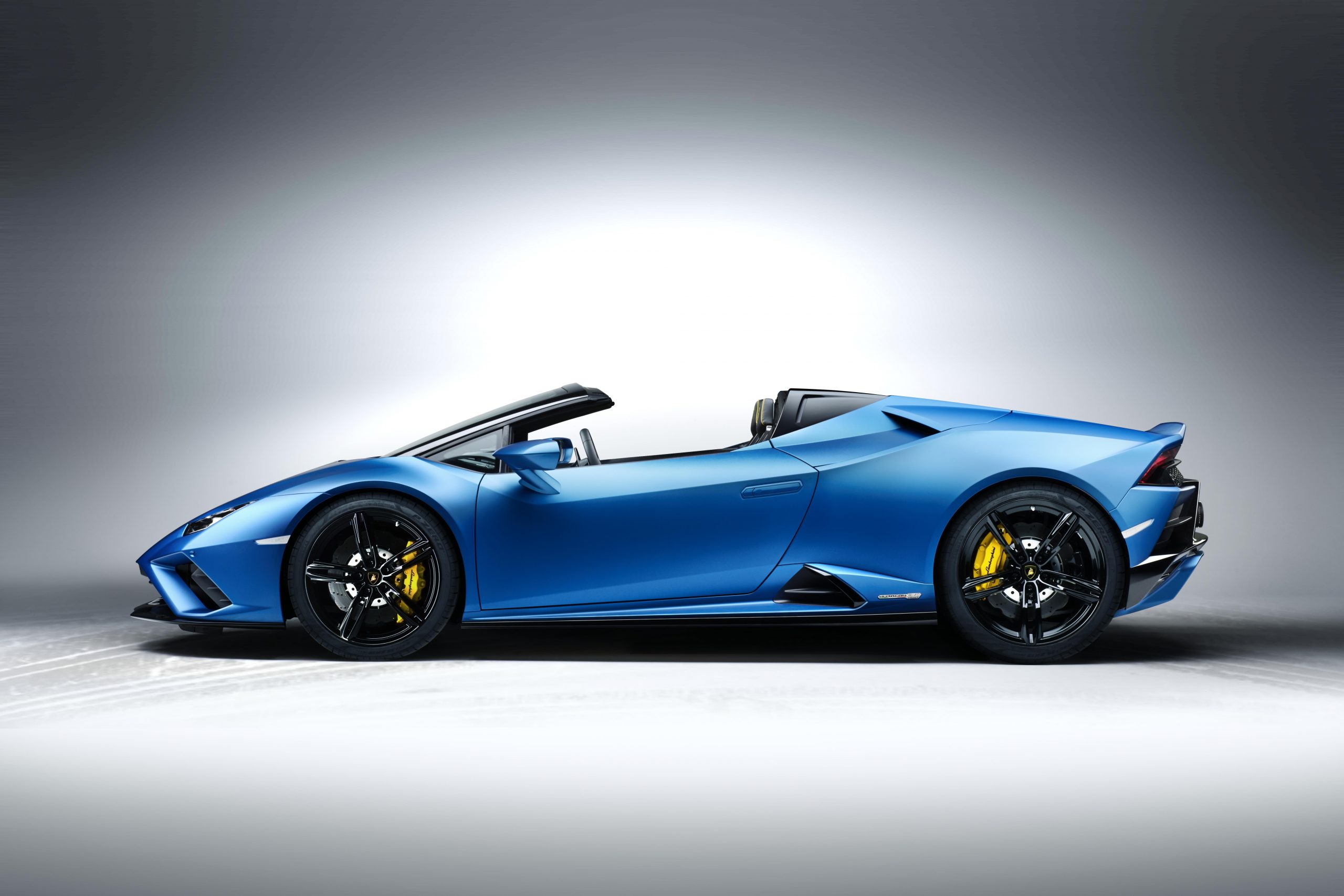 The Huracan EVO RWD Spyder has the same aggressive and signature Lambo design but, gets notable styling differences from the coupe. These include the folding fabric roof instead of the fixed top, wider air-intakes, a new front splitter, a glossy black rear bumper and a new integrated rear diffuser for aerodynamic stability.

The open-top Huracan EVO RWD also borrows AWD’s twin buttress design and rear diffuser. It also features the Italian automaker’s active aerodynamic technology that adjusts front and rear flaps to offer additional downforce and reduce air drag. Compared to the Coupe, the Huracan EVO RWD Spyder is about 120 kg heavier due to the structural enhancements and the hydraulic system for the retractable roof mechanism. The soft-top can be raised or lowered in just 17 seconds at speeds of up to 50 kmph. The car uses a hybrid chassis made of aluminium and carbon fibre that helps keep the weight in check at 1509 kg (dry). 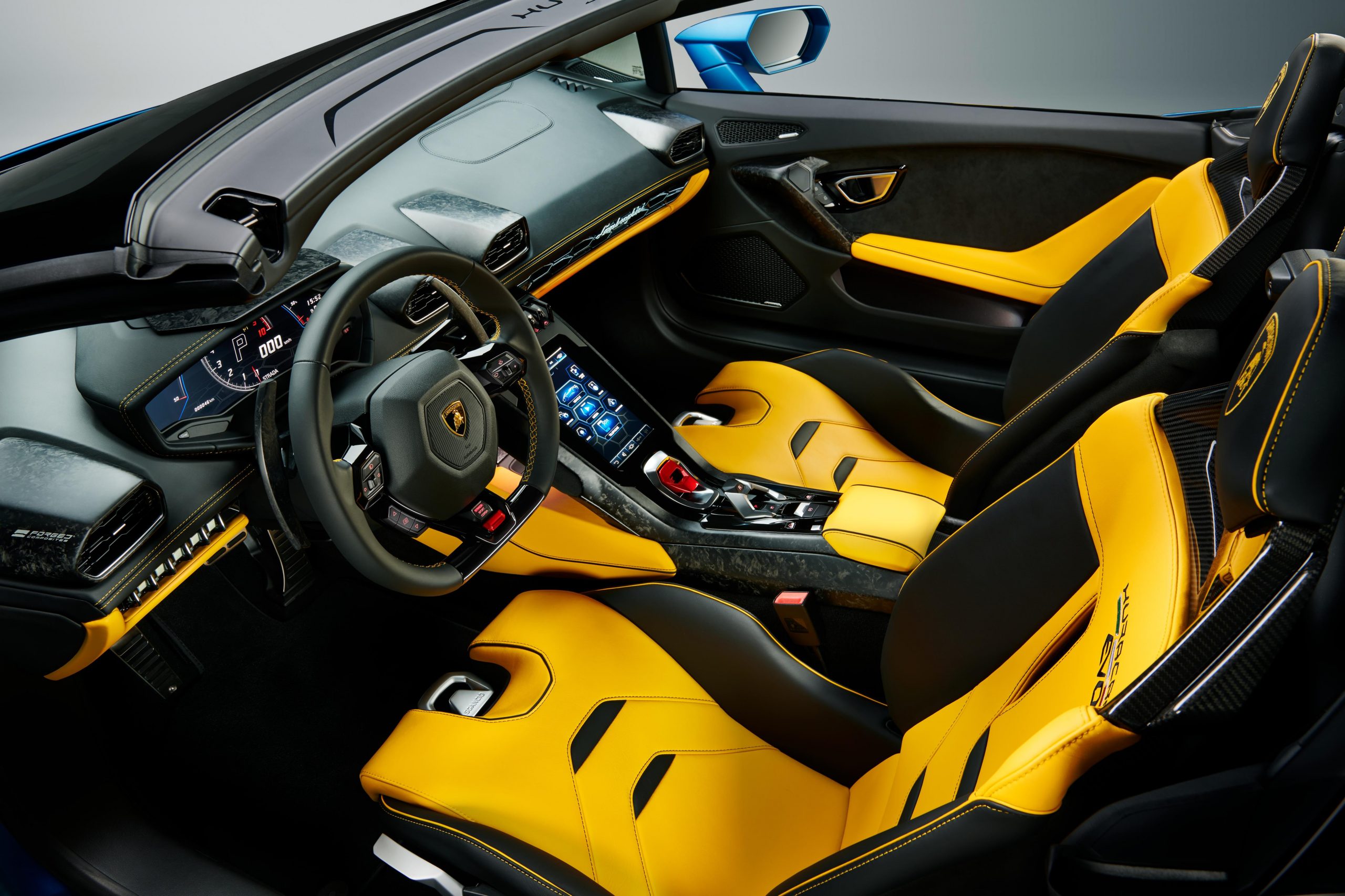 On the inside, the luxurious 2-seater cabin has the same layout as Huracan EVO RWD and even shares the same set of features list. These include an 8.4-inch infotainment system with HMI (human-machine interface). This console, besides offering smartphone connectivity, also allows the driver to adjust the climate control system and other vehicle settings. Ventilated seats, key-less entry, and a flat-bottom multifunctional steering wheel comes as standard on this super-sports vehicle.

And just like in other Huracan models, the RWD Spyder gets the ANIMA (drive selector) on the steering wheel to switch between three different driving modes – Strada, Sport, and Corsa, with Corsa delivering the track-oriented performance. 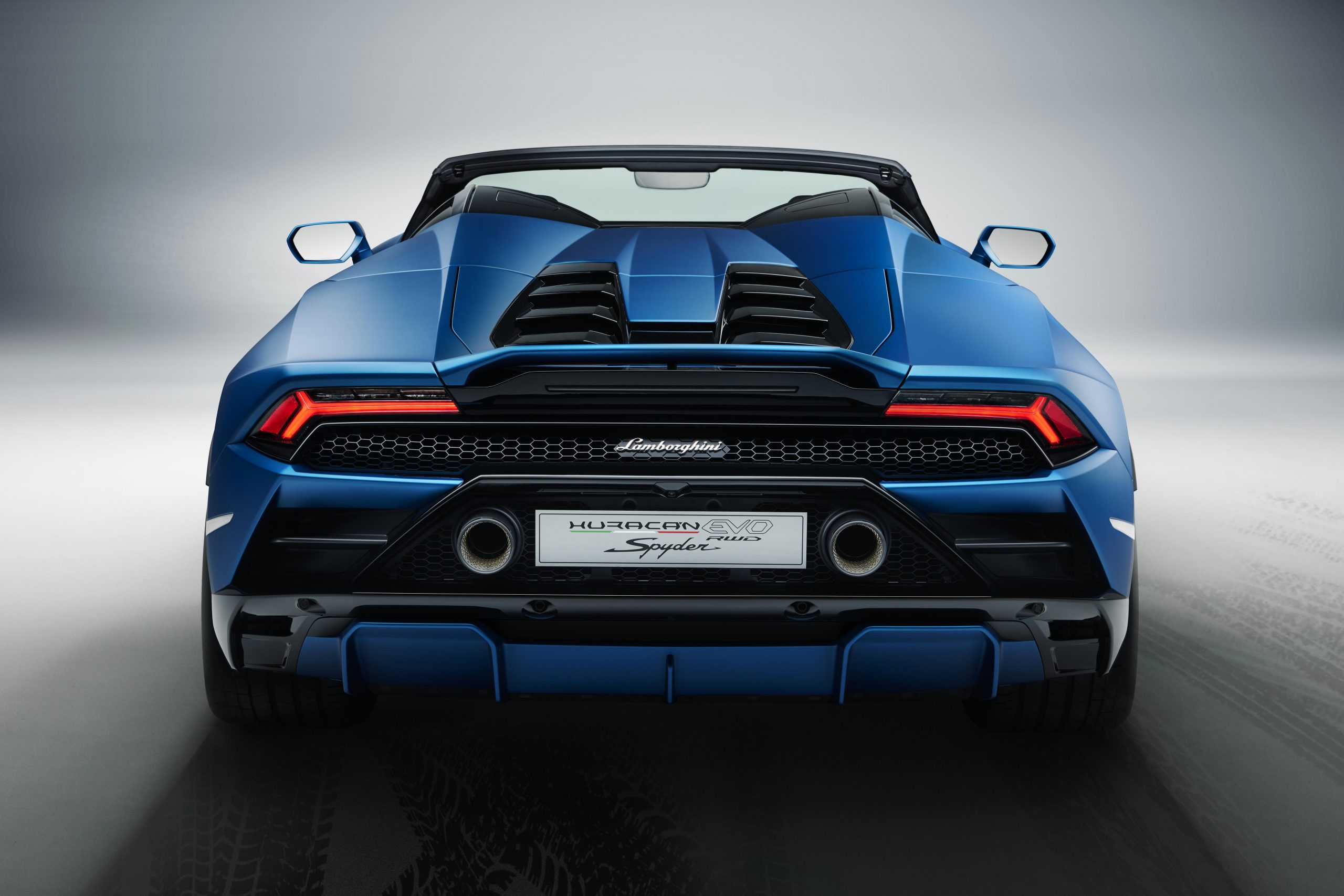 Talking of performance, this Italian beauty draws power from a BS6-compliant 5.2-litre V10 engine that is mated with a seven-speed dual-clutch transmission. This powertrain delivers 602 bhp and 560 Nm of peak torque, which is 28 horses and 40 Nm less as compared to the regular Huracan Evo AWD.

The Spyder sprints from 0-100 kmph in just 3.5 seconds, which is only 0.2 seconds slower than the RWD Coupe version. The claimed top speed of the supercar stands at 324 kmph. The Italian automaker has also given an option to raise or lower the rear windscreen on the open-top with the push of just a button allowing one to enjoy that V10 symphony in the cabin. 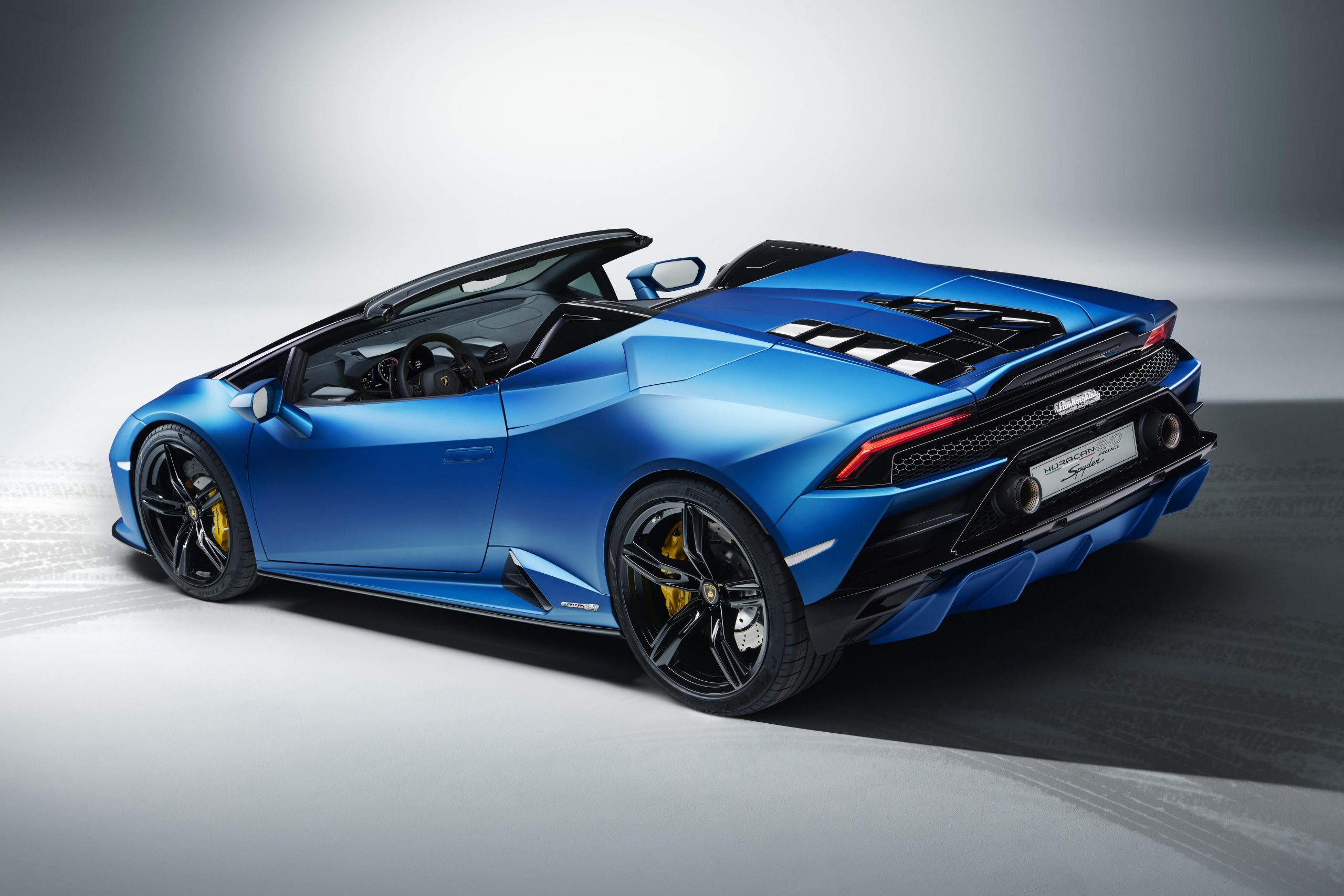 For ensuring the passengers’ safety, multiple airbags, ABS with EBD, crash sensors, an engine immobilizer, traction control, and a rear-view camera are available. 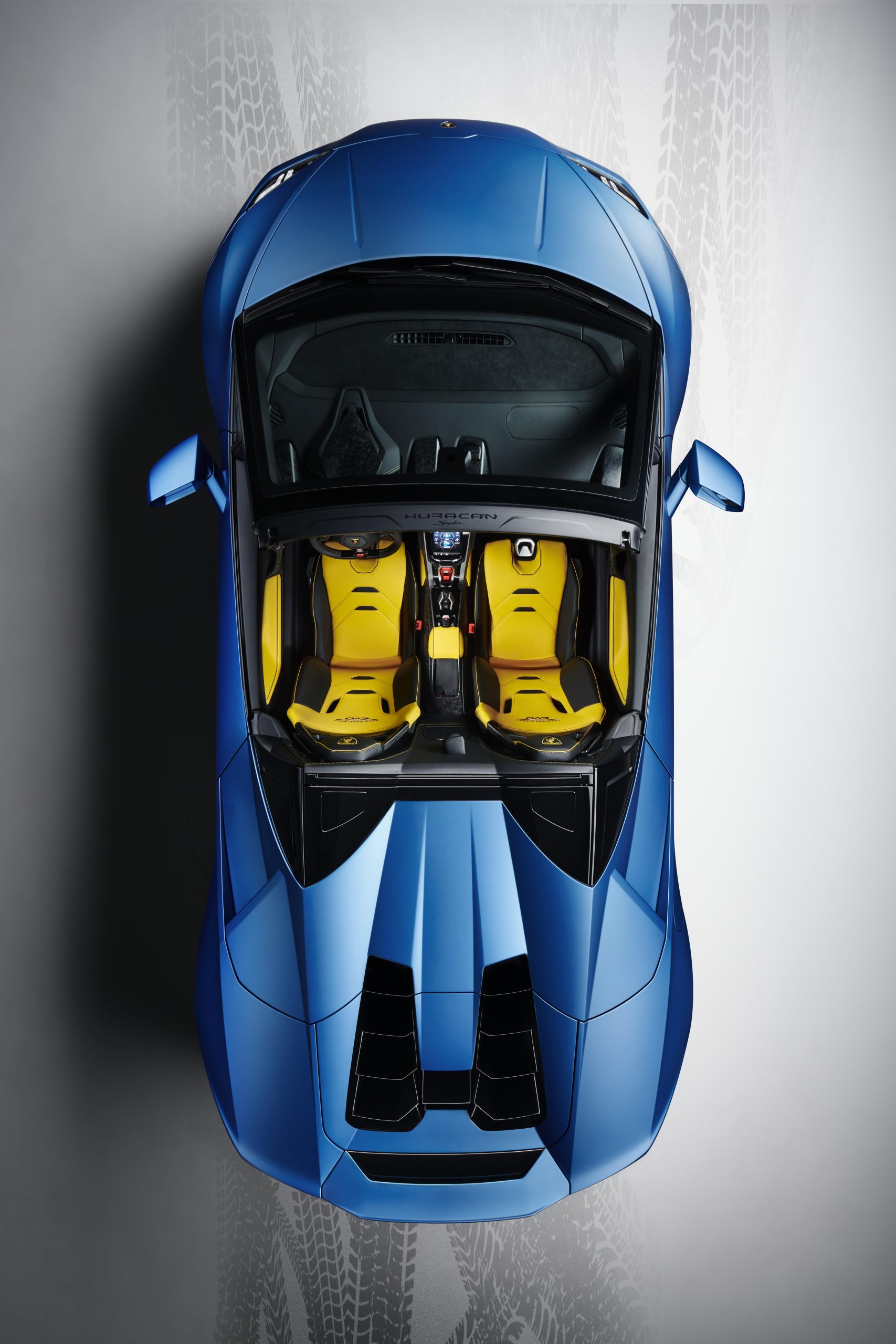 The Lamborghini Huracan EVO RWD Spyder will sit between the RWD Coupe and AWD Spyder in the Italian automaker’s Indian lineup. Customers will also get the option to configure the car for cosmetics, features and performance upgrades right from the factory.

“Huracán EVO RWD Spyder is an instinctive driver’s car, engineered for individuals who prefer to experience the feedback and engagement from the set-up of a rear-wheel-drive car where the electronic intrusion is minimized. As Huracán EVO RWD Spyder features a fun-to-drive experience, it definitely adds vitality to the super sports cars market in India as reflected in the increasing number of supercar aficionados,” said Francesco Scardaoni, Regional Director, Automobili Lamborghini, Asia Pacific.