Jeep India launched a celebratory limited edition of the Compass this week to highlight 5 years of the brand’s presence as a premium SUV maker in the country. Since it’s first induction in the Indian market in 2016 with the Compass, the company’s growth has been somewhat decent. Its subsequent models, the Meridian and the Wrangler which were introduced in 2020, saw a jump in sales by 130%! The Meridian is a “made in India” product with over 80% components manufactured at the Ranjangaon facility in Pune.

The limited edition variant, which had it’s facelift last year gets a special ‘5th anniversary Edition’ branding, with aesthetic enhancements. It sports a gloss-black front grille with grey accents. Greys are also found on the ORVMs and on the bumper garnishes. New 18″ Satin Granite Crystal Painted Alloy wheels are present on this special edition which look stunning and adorn the stance of the car nicely.

On the inside, all remains same, but with the grey contrasting trims on the leather seats. In terms of powertrain, there is no change in the 4×2 and 4×4 variants, with the same 2L and 1.4L Diesel engine options respectively. As is with any of the special editions in this segments, the Compass comes mostly with cosmetic updates to commemorate its 5th Anniversary. 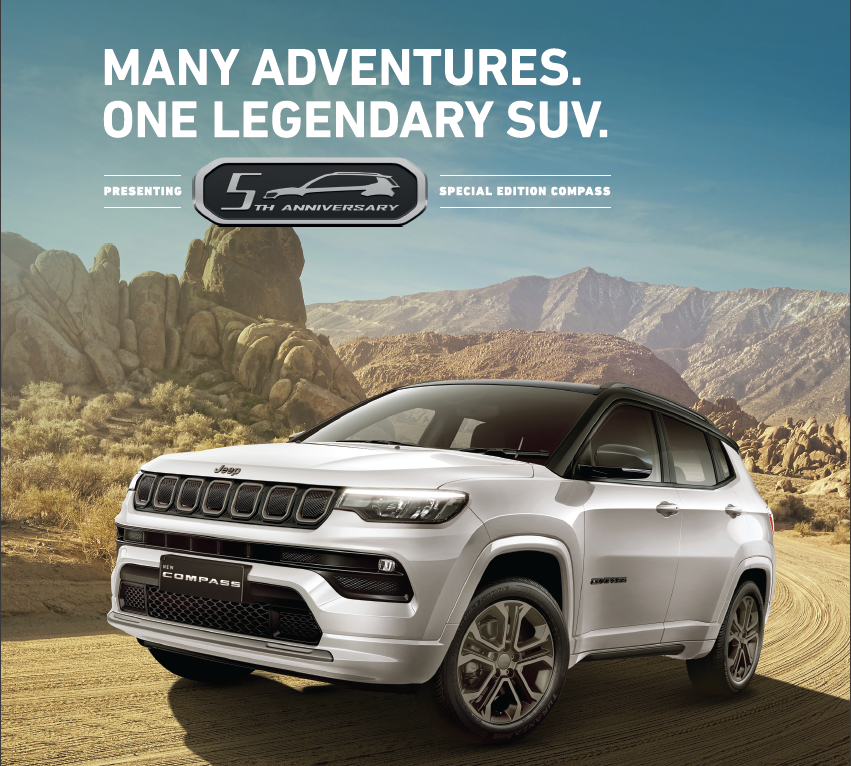 The Anniversary Edition has been slotted between the Limited edition and Model-S variants with a figure of 24.44 Lakh (ex-showroom). This makes the SUV a strong contender to the likes of Volkswagen Tiguan, Citroen C5 Aircross and the newly revived Hyundai Tuscon. Jeep also has plans to launch the highly coveted next-gen Grand Cherokee in the next few months as well, which will be locally assembled.