Polestar have taken the wraps off their first e-SUV – the Polestar 3 with a range of 300 miles with the 5 year old Scandinavian brand teaching designers a lesson in true minimalism. The Polestar brand was developed as a subsidiary of Volvo which quickly made a name for itself in Europe and across 25 countries already. The Polestar 3 is an e-SUV which is a combination of two of the most in-demand vehicle segments. This could very well be a game changer for the brand.

Polestar took it from the base as they started from an ICE powered SUV architecture. They stretched the wheelbase, removed the third row, lowered the seating position to sportier position and then gave it a coupe like design. And that is exactly what they did with it. The design is less of a typical SUV and more of what we expect an electric SUV of the future to look like. From the futuristic lighting to the minimalism that Polestar has expertise in, this is a looker.

The coupe like design makes it look like an SUV while also being an unmistakable SUV. The agility doesn’t take away the 250mm ground clearance and the lower roofline doesn’t make it stand out like an out and out big bumper SUV. SUVs have usually been big slabs of metal on the roads that may or may not go off-road but offer huge comfort levels and good ride quality. But, as soon as you want to go quick, you wait for the surge of power and then too you cannot make a sharp fast turn owing to the body weight. The Polestar 3 has flush door handles to reduce drag and Polestar went a step ahead for better aero performance.

There is an inverted aerofoil at the front end of the bonnet to suck the deflected air and connect it quicker to reduce drag which is caused in a normal SUV. The headlamp module is a 1.3 MegaPixel HID module which allows for it to be as thin as it is. Repair costs will definitely not be thin though! There are cameras, radars and cleaning/heating devices for these sensors to better guide the automated driving and help the AI driven suspension and headlights.

The theme with the inside was the five senses that humans have. Sight sound, smell, feel and touch. The story begins with sound as the Polestar 3 comes equipped with expertly tuned 28 speaker 1750 Watts of Bowers and Wilkins 3D surround sound system. To breakdown how much attention to detail it has, the car comes with 5 Nautilus chamber tweeters, 7 mid-range speakers, 4 headliner speakers and 4 full range speakers in the headrests themselves. Additionally, there are 4 woofers and 1 Fresh-air sub-woofer to complete the bonkers 25 speaker sound system. There are 3 additional speakers to give the “Polestar sound” at low speeds and all this is driven by a 28 channel powerful amplifier.

Coming over to smell, the car comes equipped with AAC or advanced air-cleaner which has layers of protection from pollutants and air. The first layer eliminates industrial dust and pollen, the second layer removes finer dust while the final layer eliminates harmful gases. 3000 liters of air in the cabin keeps it fresh for oxygen rich air to breathe. The cabin in the Polestar 3 will clear 95% fine particles, 97% viruses and 99.9% of pollen and halogens.

In terms of the feel aspect, the Polestar 3 comes with every possible safety feature you can imagine. It has Volvo cars as its partner so it is no surprise that the safety feel is dialed to the max. In the unlikely event of an accident. there are 10 airbags in this 5-seater car along with a LUMINAR LiDAR tech to give customers access to one of the best automated driving technology in the world. The airbag of the Polestar 3 can inflate and deflate within 30 ms which a sixth of the time it takes to blink our eyes! But hey, it also has driver monitoring features for the times a driver blinks way too long and falls asleep thanks to the precious automated driving tech. It also comes with interior detect feature to detect pets/children in the car preventing the accidents of leaving them in the car for long.

The center of gravity in the Polestar 3 is 100 mm lower than ICE powered SUV which gives you an idea of the S in SUV is ‘Sporty.’ The load distribution is also 50:50 and there is Torque Vectoring as well along with a Dual Clutch system. The Polestar 3 also comes with air-suspension as standard and it maintains the height as per the speed of the car. It can raise the car by an additional 50mm for off-road and bring it low down to reduce drag during high speed driving. It has a an updating frequency of the suspension dampers of 500 Hz which translates to an update in every 2 ms. In other words, at a speed of around 90Kph, the car will adjust its dampers at every 5 cms!

Polestar aren’t too keen on the spec numbers and we couldn’t disagree at all. In today’s world, the power figures of a Rivian pick up truck will have much better and bigger numbers than a Ferrari Pista or a 911 GT3 but, if you want a sports car, the Rivian would be your worst decision. Yet, for the sake of it, the Polestar 3 has 380kW or 517HP of power with a claimed range of around 300 miles. As we said before, it doesn’t look slow, it has technology to make it handle like a non SUV and it has the power to beat a LOT of the ICE powered sports cars.

2023 BMW M2 launched! An ode to stick shift with a MANUAL on offer 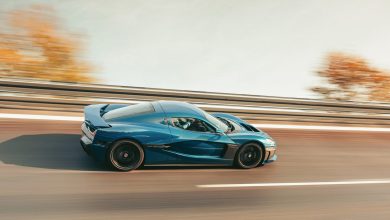