Honda, one of the leading premium car manufacturer of India, is all set to release its first BS-6 compliant diesel model for the Indian Market. Honda Cars India (HCIL) have announced that they will be introducing the BS-6 version of Honda Amaze. Amaze is the highest selling sedan amongst the sedan portfolio of Honda.

Mr. Rajesh Goel, Senior Vice President and Director (Marketing and Sales), said, “Honda is commuted to bring its latest and advanced environment-friendly technologies to the Indian market and today we have introduced BS-6 version of our largest selling model Honda Amaze”. This new version will be available in both Diesel and Petrol variants. The Honda Amaze will be the first Honda BS-6 diesel model to be released in India. It offers a combination of powerful performance and the best fuel economy within the segment. 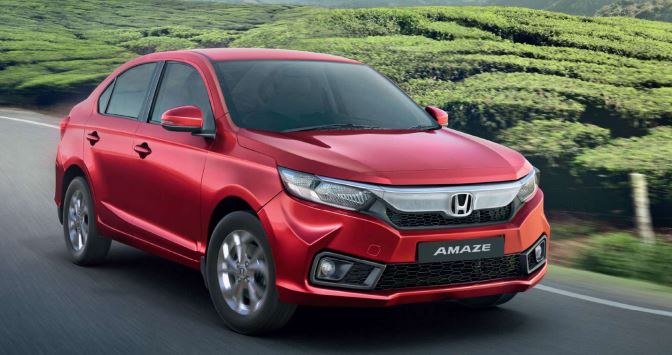 Now, Honda is a brand we have all heard of. Given that the name sparks joy in all motor heads (cause Civic Type-R), let’s have a deeper look at the BS-6 diesel model for Honda Amaze. Firstly, the model will have a 1.5L  i-DTEC diesel engine in both the automatic and manual transmission versions. Next, Honda has applied DPF (Diesel Particulate Filter) and advanced exhaust gas after-treatment system with NSC (NOx Storage Catalyst) to the versions. This has been done to meet the challenges set by Nitrogen Oxide (NOx) emissions and Particulate Matter (PM) combustions from Diesel engines. Adding to this, Honda’s Silver Thin Coated DPF has the ability to reduce PM combustion time by a significant 40% when compared to the conventional DPF.

The 1.5 liters, four-cylinder turbo Diesel engine was upgraded to meet the needs of BS-6 norms. Following the upgrade, the model provides 100hp and 200Nm of torque for the manual transmission. For the automatic transmission, it provides 80hp with 160Nm of torque. While this is the same as the power of BS-4, fuel efficiency has dropped. The BS-6 compliant model provides 2.7kpl lower than BS-4 version’s 27.4kpl for manual transmission. On the other hand, it provides 2.8kpl lower than BS-4’s 23.8kpl. This does hit a sour spot knowing while we care about the environment, the fuel efficiency suffers a blow!

As we mentioned before, Amaze is the best selling model in India within the Honda sedan family and is presently available in the 2nd generation version. This model was conceptualized and developed keeping in mind the growing needs and requirements of the younger consumers in the Indian market. The contemporary sedan offers an experience that is one class above the rest. Since April 2013, the sales of Amaze in India have been 3.9 lakh units. Among this, the 2nd generation contributes 1.3lakh units since the launch in May 2018.

While the Honda Amaze will be the first BS-6 compliant diesel engine, the Honda CR-V Petrol and Honda Civic Petrol has been BS-6 compliant since its launch in October 2018 and March 2019 respectively. The Honda City Petrol (BS-6 compliant) was launched in December 2019.

The ex-showroom prices (Delhi) of Honda Amaze are as provided below:

Here are the part takers of the Delhi Auto Expo 2020!