First things first, post the Azerbaijan Grand Prix DNF, Ferrari team boss Mattia Binotto had cleared it up that Leclerc’s PU was beyond repair and he’ll be taking a new one. This comes with penalties and as a result, Leclerc would be starting the race from the back of the grid. Keeping that in mind, Leclerc and Ferrari decided to keep out of the qualifying and not push the new unit much harder unnecessarily. With that out of the way, let’s take a look at the qualifier.

In the treacherous conditions right from the start, Pete Bonnington, Hamilton’s engineer, radioed to his driver “Plan is to get a time on the board early with the risk of red and yellow flags.” Hamilton retorted “I can’t see a lot ahead of me.” Fernando Alonso was in a different league and he definitely forgot that Alpine was a mid-field car. The magic of rain, brings out the old flames of some of the best F1 drivers of the era. Alonso went P2 in Q1 just missing the wall of champions as he stunned the sell-out crowd of Montreal.

What was interesting though was Leclerc, Albon and Sainz were ‘noted’ by the stewards for driving unnecessarily slowly which was quite confusing given the track was full of rain water so, what is too slow? Anyway, the 2 Alpha Tauris were the only surprise elimination in Q3 as Aston-Martin lost their pace and none of the home heroes, Latifi or Stroll, made it past Q3. Kevin Magnussen went P4 pipping Charles Leclerc to P5. Here’s the top 15 from Q1:

The conditions became worse as Hamilton went out on full wets rather than the intermediates chosen by almost everyone else. Hamilton said conditions were “definitely on the crossover, very close”. It seemed like Hamilton was right as Albon and Perez, who begged to differ, went with inters. Both soon finding the wall at Turns 6 and 3 respectively early in the segment, the two drivers aquaplaning off and hitting the barriers. Albon’s impact seemed innocuous enough, causing little visible damage – although Williams did change his front wing. Perez on the other hand damaged his own front wing and was unable to find reverse on his RB18, leaving him wedged in the TECPROs, bringing out a red flag. The Mexican was forced to climb out of the car and trek through the parkland back to the paddock, his quali over in Q2 in a barrier on a day when Red Bull would have loved to press home their advantage over the grid penalty-hit Leclerc. 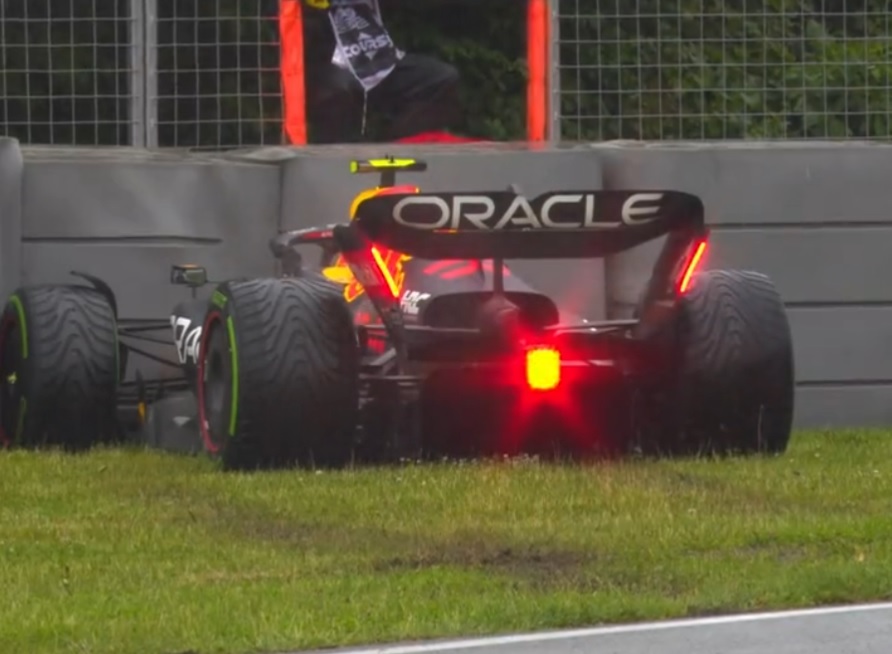 Leclerc parked his Ferrari owing to the penalty as Mclaren’s star driver Lando Norris went out with just 3 minutes on the clock after he reported a power unit misfire on his McLaren.Leclerc, Perez and Norris were soon joined by both Bottas and Albon who, even after a magnificent effort, failed to get the first Q3 for Williams. The other 9 drivers still went out on inters for setting their times. It was Alonso and Russell who surprisingly went P1 and P2 respectively before Verstappen came in at P1. Hamilton too switched to inters for a personal best putting him in P5, the two Mercedes separated by Sainz. Another interesting bit was Mich Schumacher having his best qualifying ever finishing in P6 showing his true skills on a wet track. Here’s the top 10:

And then came Q3 putting all the drivers at their A-game. It was a stunning Q3 as Sainz went P2 for a while 1.1s behind Verstappen but 0.037s ahead of fellow Spaniard Alonso whose Alpine seemed to have more pace than the Mercs or almost as good as the Ferrari. The 1.1s gap to Ferrari was enough to show the difference between the RedBull and the rest of the field. It was then a shocking decision from Mercedes driver George Russell going on slicks on a rather water-filled track unsurprisingly spinning out of Turn 2 as his tyres were too cold for grip. 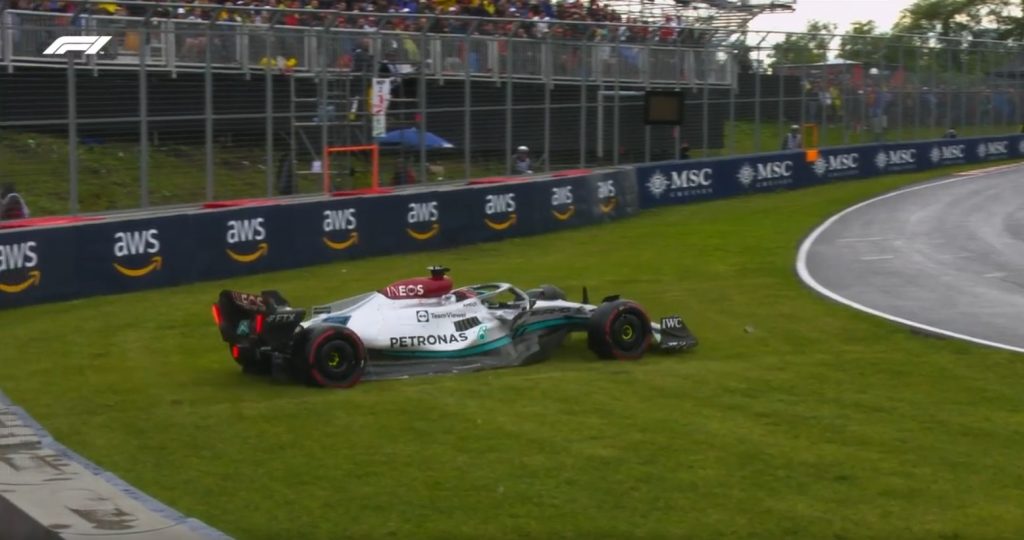 It is moments like these in Formula 1, a wet race or qualifying which really brings out the experienced ex-world champions in their real form. This was the case here too as Alonso went P2, ahead of another Spaniard Carlos Sainz and Hamilton going P4 in a car that was very hard to keep on track in FP2 the day before. Hamilton went P2 for a while before Sainz took it as he slipped out of the last corner putting him 0.8s behind Verstappen… again missing out on a potential pole position. Worse news came when Alonso pipped Sainz for P2 by a tenth of a second as he went on an absolutely stunning lap stealing ALL of the cheers from the sell-out crowd. Not to be missed was a spectacular drive from Haas driver Kevin Magnussen who slotted P5.

Come race day tomorow, we have a stunning start grid. We see Hamilton on the second row and Alonso on the front row at P4 and P2 respectively. Their old rivalry will definitely give us a spectacle as we’ll witness Leclerc trying to fight from the back of the grid while Perez too starts P13. Will Sainz finally come to action to fight Verstappen’s RB18. Alonso seems to be on fire lately. His perfect response to a sarcastic comment from Verstappen calling him old was “Ah! I’ll pass him on the first corner.” What’s more is Russell’s true potential will be revealed as he tries to fight from the back of the grid. This will be a race you shouldn’t miss.