Ferrari have a a lot to think about over the month-long summer break to re-align their decision-making approaches during the race, after another disastrous weekend in Hungary. Even with the best car on the grid, their winning strategy failed to cash out for them with a series of bad tire choices and delayed pit-stops. This affected both their drivers incessantly throughout the first half of the season as far as the championship is concerned. Together combined, the Italian team already have 7 total DNFs in just 13 races! Apart from this mistakes cost them the victory at multiple occasions, with the freshest one from the Hungarian GP!

The superior RedBull gameplan for Verstappen paid off pretty well as the team did everything right including the strategy, tires, race pace and a very strong undercut, with pit-stops precise to the millisecond! Ferrari no doubt had a better pace during the whole weekend, but a poor choice of tires gave RedBull the green light they were looking for to compete for the win. In Horner’s words, “We realised we had a chance when Leclerc put on the Hards!” Verstappen was easily able to overtake the Ferrari driver, who found no traction on his tires to defend or attack on corners.  The pit-stops for RedBull were especially critical and all of them paid off pretty well in terms of time lost and the position in which the driver came back on the circuit. Surely he gave his fans a major scare with that spin on Lap 42. But 360s are what last year’s World Champion specializes in doesn’t he? A pretty well deserved ending to the first half of the season. 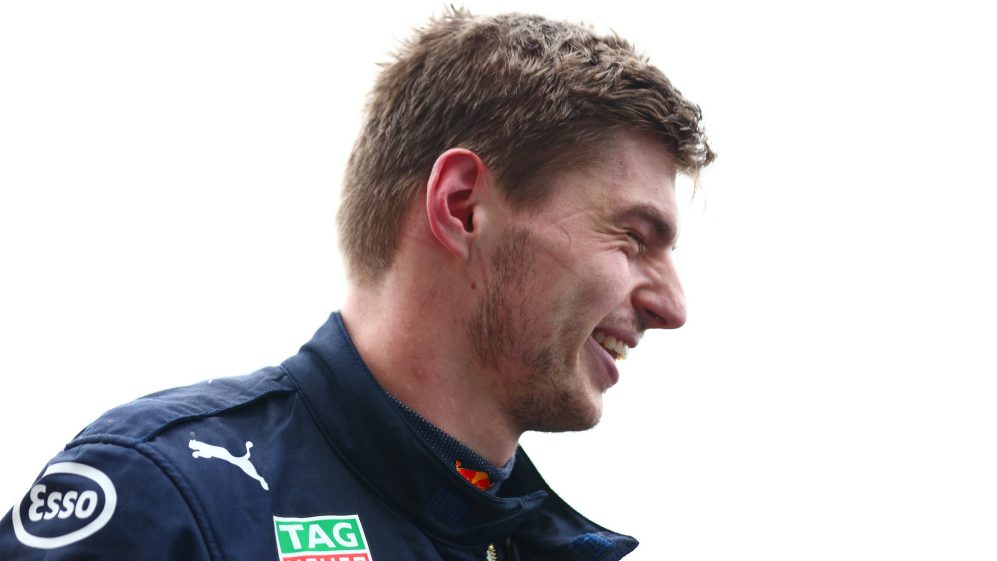 Mercedes getting up to speed but can they catch up to Ferrari?

The Mercedes team is currently standing at 304 points, just 30 points shy off Ferrari. A healthy gap has been maintained by the Red team so far, mainly due to the tremendous pace in their car this year. But, at least one of the drivers of the Silver Arrows has consistently secured a podium in the last 6 races, including the double podium streak from the last 2 races. In fact, Hamilton has had a podium in 5 of the last 6 races. Hamilton and Verstappen remain the only two drivers to have been on the podium in the last 5 races. There’s the reason why these two are considered different from the pack.

Both the teams have had their fair share of problems this year, but the prospects currently look in the favor of the Mercs with the momentum they have built up. When Ferrari turned up with a “mid-field” car in 2019, they were basically competing in the mid-field and were nowhere near the Merc or RedBull. Now that Mercedes have had a similar situation, they’re lying just 30 points adrift of Ferrari who have arguably the best car on the grid. What does that say about a team? 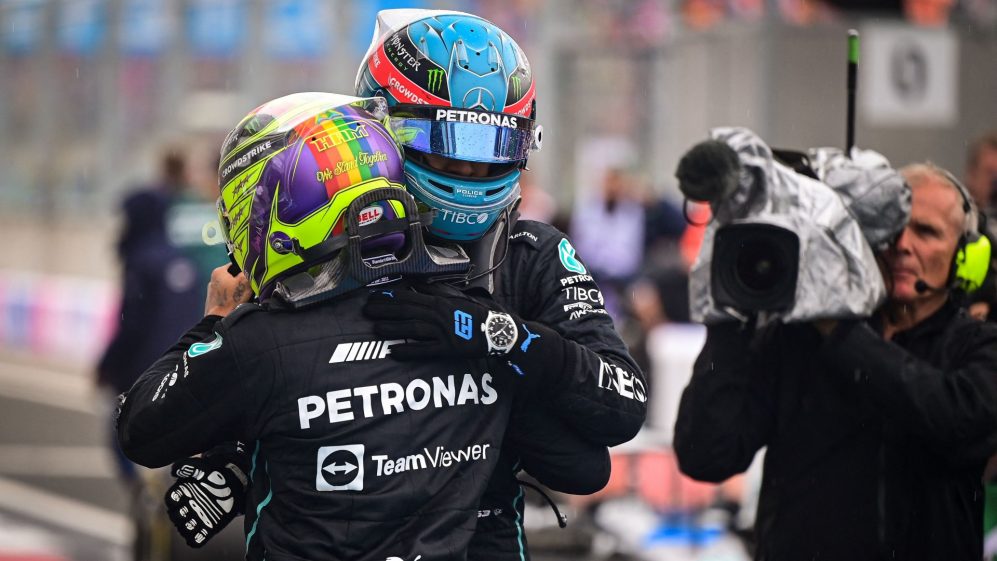 Hamilton had a very decent start as he immediately overtook both the Alpines who were ahead of him. Thereafter it was a relatively lonely race for him as he climbed on to the P2 spot right till the end after Ferrari bungled their tire strategies. Both the drivers smartly took advantage of their competitors who were ever-so-struggling on their tires. Their strategy worked out in the end with the double podium finish after Sainz failed to catch up to Russell. Russell too has a lot of positives to take from the weekend, especially his first pole in F1, except for being beaten merely by a pace difference of the cars. His overtakes and battles with Perez and Leclerc were also phenomenal to watch. An interesting catch was that Russell was easily outsmarted by Hamilton with the switcheroo when Lewis overtook George. Nothing bad on Russell’s part, just that he needs to learn these tactics and have a bit more race IQ in order to compete with the likes of Verstappen in the future because this is Russell’s first year in a top team while Verstappen has been with RB since 2016!

McLaren and Alpine level out for the Summer break

Both the teams were taken as examples not to use the Hard tires for the race. The Alpines who had a strong Qualifying lost out in the race the moment they put on the Hard tires. McLaren followed suit and Ricciardo fell back quite a lot paces, but Norris managed to finish ahead at P7. McLaren are currently at 95 points, just 4 points behind Alpine who are at 99 points. 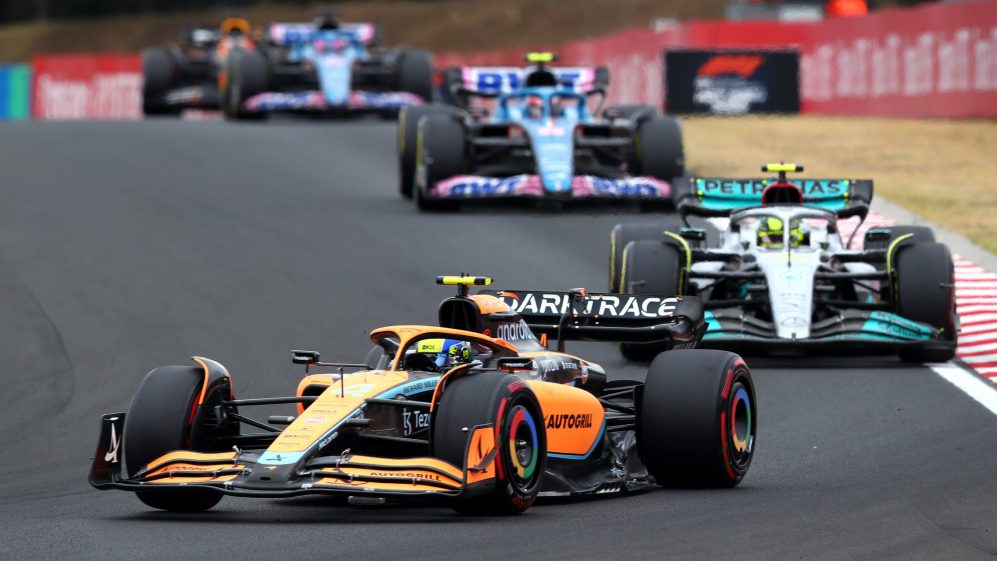 It can be safely said now, that the new rear wing on the AMR22 is one upgrade which has shown some positive result this year. Both drivers Stroll and Vettel started P14 and P18 respectively, finished at P11 and P10. At a track where the undercut is fairly strong it can be said that their tire strategy worked out as well. Thoughts definitely seemed to be melancholy in the whole F1 community as just before the weekend, it was declared by Vettel himself that he would retire at the end of the current season. 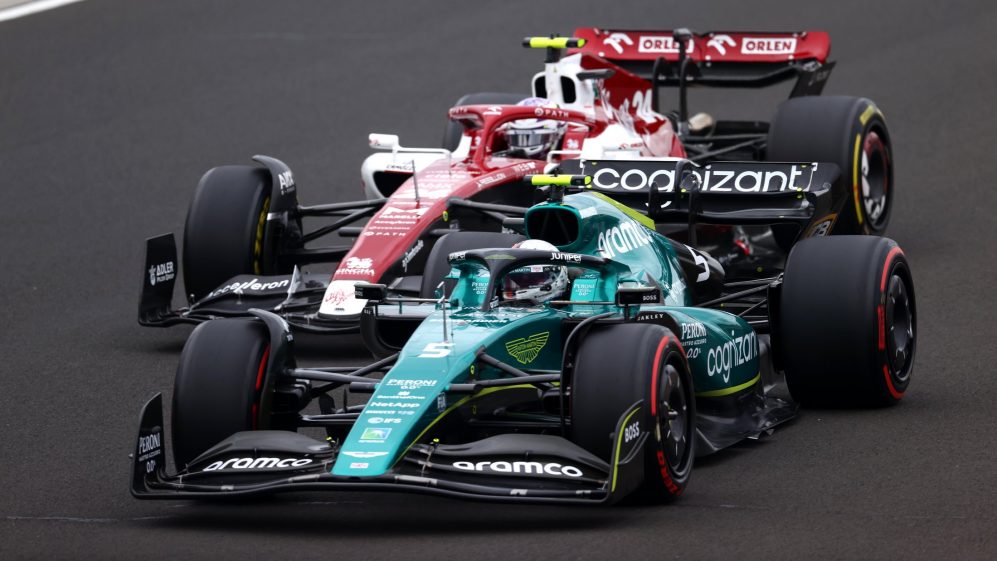 A flawless run by the current World Champion, who drove like a champion! The overtakes of Leclerc, Hamilton and Ocon were genius and the recovery after the spin surely calls for applauses.

A clean drive from the brit who probably would have done better, if not for his DRS issues, which he started facing since Quali. He managed his tires well till the end with timely pit-stops to undercut the Ferrari drivers, but only losing out to car pace from the RedBulls.

Russell eked out the maximum performance his car could muster on Sunday and was able to hold off the Ferrari at the start. Though his engineers fell for the dummy pit strategy call of Ferrari, he managed to get them in the end by battling with Leclerc and undercutting Sainz for P3.

The Spaniard himself was confused about how he ended up in the spot, where he had the potential to win the race. His race was mainly compromised by a series of slow pit-stops which made him lose out to Russell in the attempt of an overcut.

Checo did not seem to have pace at all throughout the weekend. Though he was impeded quite a lot during the practice and quali sessions, he seemed to struggle a lot with his tires in the race as well. Although his recovery from P11 to P5 is remarkable, it must be said that his teammate did a way better job at it.

Leclerc had gotten away well at the start of the race and showed a good winning pace, until his team decided to change for Hard tires. He lost pace massively and did not have any speed out of the corners and by the time he changed again for softs, it was too late.

Norris has finished P7 for the 3rd time in a row, after a P6 in Silverstone. A smooth sailing drive for the young Briton but there was not much he could do, given his car’s pace. It shows that he has very good pace and capable of carrying his team to beat the Alpines.

Alonso did not quite have the pace in the race like he did in the previous sessions. This was coupled with the Hard tires which degraded his race even more, as he lost out positions without being able to fight much.

A relatively poor race from the French driver who did show any pace as well. He lost out easily to Hamilton on race start and then to both the RedBulls after a few laps. And upon that Hard tires did not obviously suit him as well, letting him finish the race no further than P8.

With most of the focus at the front this weekend, it was easy to miss the German legend rise from P18 to score a point for his team. After the unfortunate incident in FP3, he could only limit his damage and start P18 but made up beautifully in the race.